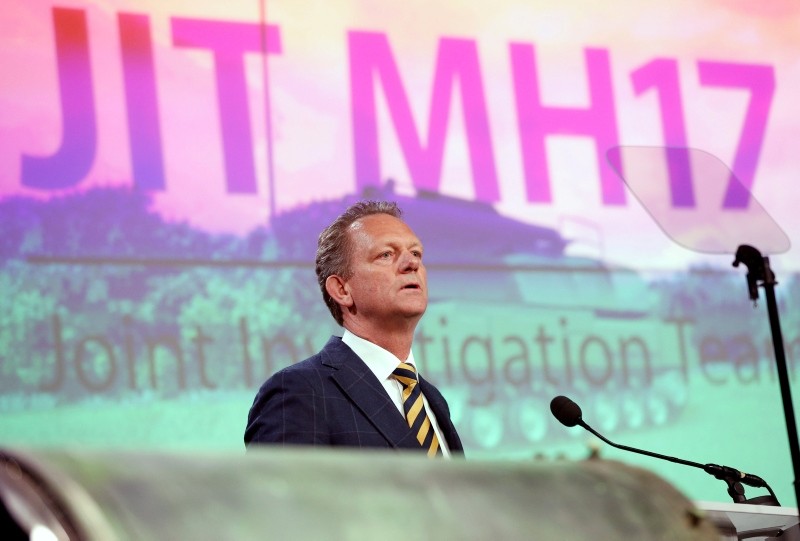 Fred Westerbeke, Chief Prosecutor of the Dutch Prosecutor's office, presents interim results in the ongoing investigation of the 2014 MH17 crash, during a news conference in Bunnik, NL, May 24, 2018. (REUTERS Photo)
by Compiled from Wire Services May 25, 2018 12:00 am

The Netherlands and Australia said Friday that they are holding Russia legally responsible for the downing of Malaysia Airlines Flight 17, which was shot down over war-ravaged eastern Ukraine nearly four years ago, killing all 298 people on board.

The announcement by the foreign ministers of both countries came a day after international investigators announced that the missile system that brought down the Amsterdam-Kuala Lumpur flight came from a Russia-based military unit. They displayed photos and videos from social media tracking a large convoy of rocket launchers through Russia.

Dutch Foreign Minister Stef Blok said that following that conclusion, "the government is now taking the next step by formally holding Russia accountable."

"The Netherlands and Australia today asked Russia to enter into talks aimed at finding a solution that would do justice to the tremendous suffering and damage caused by the downing of MH17," Blok said in a statement. "A possible next step is to present the case to an international court or organization for their judgment."

Bodies, debris and burning wreckage were strewn over a field of sunflowers near the rebel-held village of Hrabove in the Donetsk region of eastern Ukraine, about 40 kilometers (25 miles) from the Russian border, where fighting had been raging for months.

Russian President Vladimir Putin's spokesman, Dmitry Peskov, rejected the accusations. He said that Russia has been barred from the international investigation and thus can't trust its results. He also charged that Ukraine contributed to the tragedy by failing to ban civilian air traffic over the war zone.

The Russian Defense Ministry said Friday that rocket fragments displayed Thursday by investigators indicated the Soviet-made missile was produced in 1986. It said the Russian military decommissioned all missiles of that type in 2011.

It added that Ukraine inherited such missiles from the Soviet army, adding that the fragments displayed by the investigators indicated the weapon "more than likely belonged to the Ukrainian armed forces."

Russian Foreign Minister Sergey Lavrov told reporters that Moscow has cooperated with the investigation and sent data including radar images from the day the plane was shot down.

"The foreign minister of the Netherlands called me to say they have no doubts that the Buk came from Russia," Lavrov said, referring to the missile. "I asked him about the facts that would prove it, but he failed to offer any. He said they want Russia to help determine the facts on the basis of those unfounded claims."

The father of one of the passengers welcomed the move by the Netherlands and Australia.

"This is great news," said Hans de Borst, who lost his daughter, Elsemiek. "I understand why the government waited, but now the evidence is clear."

Silene Fredriksz-Hoogzand, whose son Bryce and his girlfriend were on board the Malaysian flight, said the investigation's findings was an important step forward and the decision to hold Russia responsible was "two steps forward."

Australian Foreign Minister Julie Bishop called for support from the international community for the move.

"This represents a threat to international security," she said. "If military weapons can be deployed and then used to bring down civilian aircraft in what was essentially a war zone, then international security is at risk and we call on all countries to inform the Russian Federation that its conduct is unacceptable."

The EU and NATO chimed in, urging Russia to take responsibility for the 2014 downing of flight MH17.

"The European Union calls on the Russian Federation to accept its responsibility and to fully cooperate with all efforts to establish accountability," the EU's foreign policy chief Federica Mogherini said in a statement, after investigators concluded that a missile which destroyed the plane came from a Russian military brigade.

NATO Secretary General Jens Stoltenberg said in a separate statement that after the Netherlands and Australia said Friday they held Moscow liable, "I call on Russia to accept responsibility."

In a statement, Britain's foreign minister Boris Johnson also said Russia must answer for its actions.

"The Russian government must now answer for its actions in relation to the downing of MH17.

"The Kremlin believes it can act with impunity," he said, adding "This is an egregious example of the Kremlin's disregard for innocent life," he added. Ten Britons were killed in the incident.

Spokeswoman Martina Fietz told reporters that "Russia should meet its responsibilities so that the tragedy can be fully cleared up and the perpetrators can be held to account."

Fietz added that no decision has been made on whether members of the German government will attend the soccer World Cup in Russia next month.