Macron says G7 wouldn't mind being 6, without US 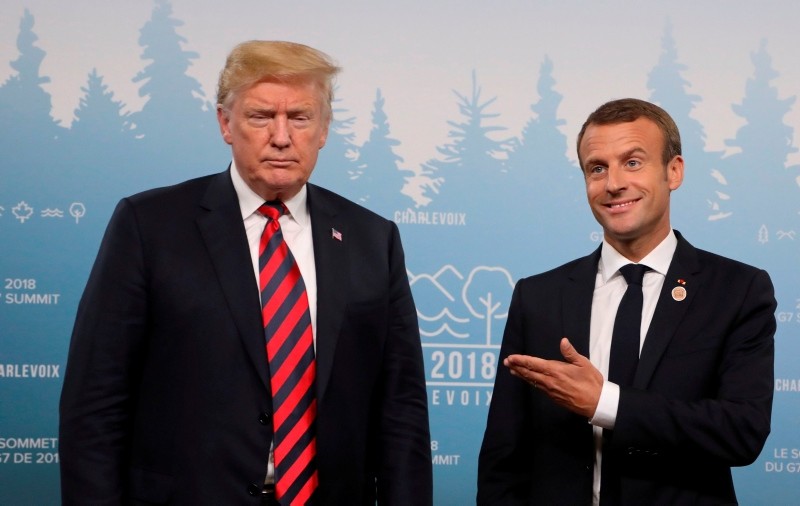 US President Donald Trump and French President Emmanuel Macron hold a meeting on the sidelines of the G7 Summit in La Malbaie, Quebec, Canada. (AFP Photo)
by Compiled from Wire Services Jun 09, 2018 12:00 am

Macron made the remarks against U.S. President Donald Trump as he spoke with Canada's Prime Minister Justin Trudeau.

Asked by reporters whether the problem with Trump was that he "didn't care about being isolated", Macron said:

"You say the U.S. President doesn't care at all. Maybe, but nobody is forever," he told a news conference flanked by Canadian Prime Minister Justin Trudeau. "The six countries of the G7 without the United States, are a bigger market taken together than the American market."

"There will be no world hegemony if we know how to organize ourselves. And we don't want there to be one," Macron said.

Macron had so far taken a more conciliatory tone with Trump, whom he calls his "friend". On Thursday, although he said it was important to remain civil, he signaled his intention to close ranks with other leaders.

"Maybe the American president doesn't care about being isolated today, but we don't mind being six, if needs be," Macron added.

"Because these six represent values, represent an economic market, and more than anything, represent a real force at the international level today," he said.

Russia was invited to join in 1998 as a way to encourage capitalist reforms in the country, turning it into the G-8. But in 2014, Russian President Vladimir Putin alarmed world leaders after moving troops into eastern Ukraine and taking over Crimea. The act was deemed so aggressive that other leaders kicked Russia out of the group and canceled an upcoming summit in Russia.

Germany's Angela Merkel says nothing has changed when it comes to Russia. Earlier this week, Merkel said the group is defined by its members' respect of international law, and Russia's 2014 annexation of Crimea was a "flagrant breach" of that. "A format that is explicitly based on respecting international law is not viable for Russia at present," she said.

At issue now is whether the seven nations can conclude their meeting with a joint statement of priorities. France's finance minister has billed the group as "a G-6 plus one" in reference to Trump's isolation from other allies.

Asked about Trump's tariffs in March, Spain's Economy Minister Roman Escolano said that most countries at the summit shared the "belief that protectionism is a huge historical mistake."

Trump's comments Friday on Russia also could alienate him from his own party.