'Appreciate your allies, you don't have many:' EU's Tusk to Trump 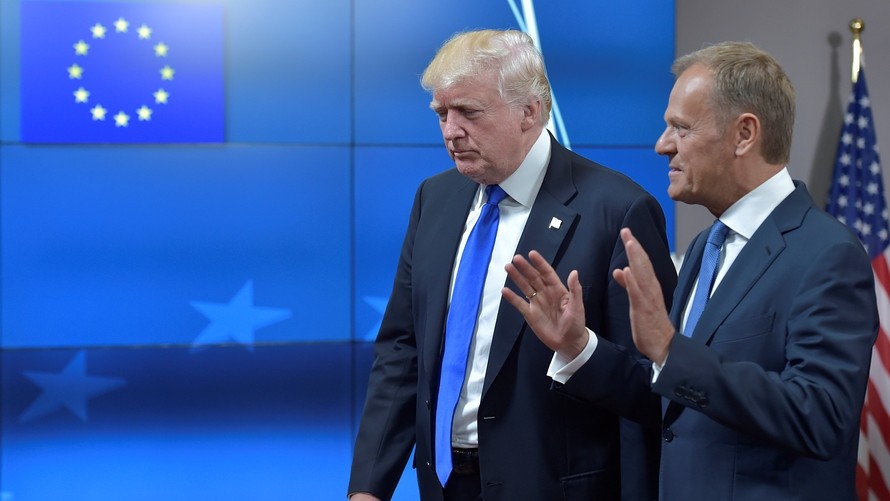 U.S. President Donald Trump (L) walks with the President of the European Council Donald Tusk after a meeting in Brussels, Belgium, May 25, 2017. (Reuters Photo)
by Compiled from Wire Services
Jul 10, 2018 12:00 am

The United States should appreciate Europe as its closest ally, European Council President Donald Tusk said in a press statement aimed at U.S. President Donald Trump ahead of this week's NATO summit, noting that Europe spends many times more on defense than Russia.

"Dear America, appreciate your allies, after all you don't have that many. And dear Europe, spend more on your defense because everyone expects an ally that is well prepared and equipped," he added, noting: "Money is important, but genuine solidarity should be more important."

Tusk also sought to "dispel" the argument that the U.S. alone protects Europe, noting that Europe was the first to respond on a large scale when the U.S. was attacked on September 11, 2001 and has lost 870 soldiers in the ensuing war in Afghanistan.

Since moving into the White House almost 18 months ago, the U.S. president has been as abrasive with some of America's most trusted allies as he has been warm toward traditional adversaries like North Korea and Russia.

The unpredictable Trump's affinity for the leaders of NATO's 28 other members carries the potential to further blur the lines between who is a friend and who is a foe.

The iconic visual from the military alliance's 2017 summit was Trump shoving aside the prime minister of new member Montenegro, Dusko Markovic, to get in front of the pack for a group photo. The billionaire went on to publicly scold his fellow NATO leaders over defense spending.

Last years' visit to Brussels also produced the famous mano a mano handshake between Trump and French President Emmanuel Macron. The two men, who were meeting for the first time, locked hands with grips so intense their knuckles started turning white.

Divisive issues have generated other white-knuckle moments in the year since. Trump still is angry the allies don't beef up their individual military budgets. The Europeans abhor Trump's decision to impose steel and aluminum tariffs on a part of the world that is supposed to be the United States' partner.

The dynamics between Trump and heads of government with their own predilections could create some volatile chemistry at the two-day summit.