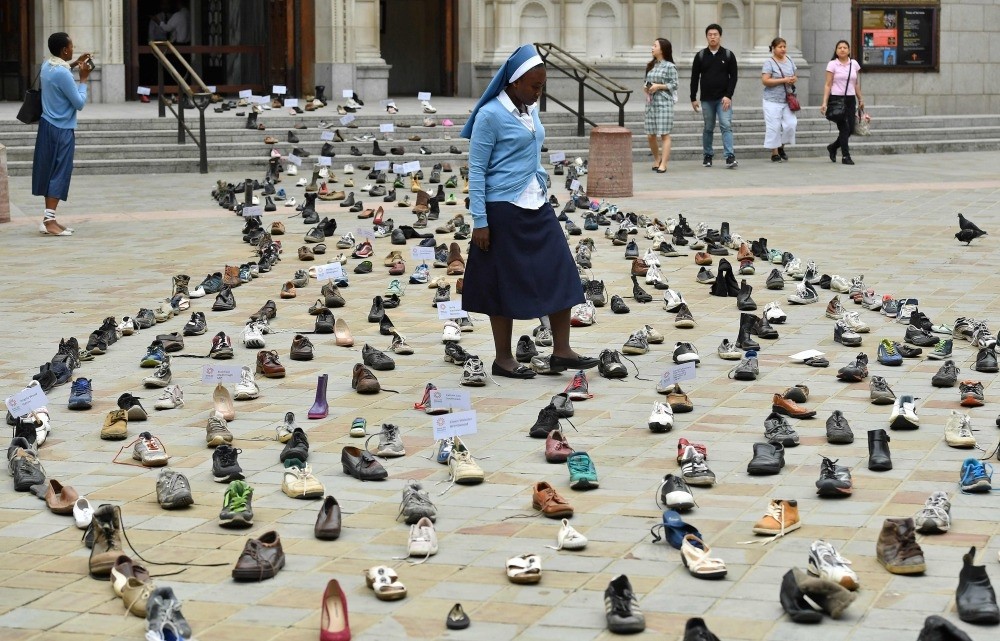 Amid a number of migrant standoffs between European countries, hundreds of pairs of shoes were laid outside Westminster Cathedral to support Pope Francis' global refugee campaign

As the European Union struggles to find a common ground for saving the lives of migrants at sea, the Pope's "Share the Journey" campaign has urged world leaders to reach a concrete agreement on refugees.

The campaign, led by Catholic charities Cafod and Caritas Social Action Network (CSAN) urged the British government to call on the U.N. member states to unite on a global agreement on refugees that will be signed at the U.N. General Assembly in New York on Sept. 18.

Amid mounting tensions across the EU over migration, Pope launched the two-year campaign in 2017 to focus on the plight of migrants, counteract mounting anti-immigrant sentiment in the U.S. and Europe, urging the world, "Don't be afraid!."

The campaign, spearheaded by the Vatican's Caritas charity, encourages people to meet with migrants and listen to their stories, rather than treat them as statistics clouded by negative stereotypes.

Pope Francis, the Argentine-born son of Italian immigrants, has been a vocal defender of migrants' rights during his five-year pontificate.

He has repeatedly urged countries to welcome migrants and stop collective expulsions, saying migrants' dignity and right to protection outweigh national security concerns. At the same time, he has acknowledged that governments must manage refugee flows "with prudence," taking into account how many people it can successfully integrate into society.

In addition, the U.N. refugee agency urged European countries to end a string of impasses over ships carrying rescued migrants and put together a Mediterranean regional arrangement that makes clear where such vessels can dock. The Geneva-based agency welcomed Malta's decision Tuesday to allow the private Aquarius ship to dock, with the 141 migrants onboard, to be distributed among five fellow EU nations.

France, Germany, Luxembourg, Portugal and Spain agreed to take in its latest passengers, along with 114 others who arrived in Malta. But U.N. High Commissioner for Refugees Filippo Grandi said in a statement yesterday that "the situation should never have come to this in the first place," the Associated Press reported.

He added that "it is wrong, dangerous and immoral to keep rescue ships wandering the Mediterranean while governments compete on who can take the least responsibility."

The standoff was a repeat of that seen in June when the vessel was at the center of a heated diplomatic crisis between European governments.

Stranded with 630 people onboard after Rome and Valletta turned it away, the Aquarius had finally been allowed to dock in Spain.

The agreement is the fifth of its kind between Western European governments since June when Italy, until now the main landing point for rescue boats, began turning them away.