No 'callous disregard' for innocent lives by Saudi-led coalition in Yemen: Mattis 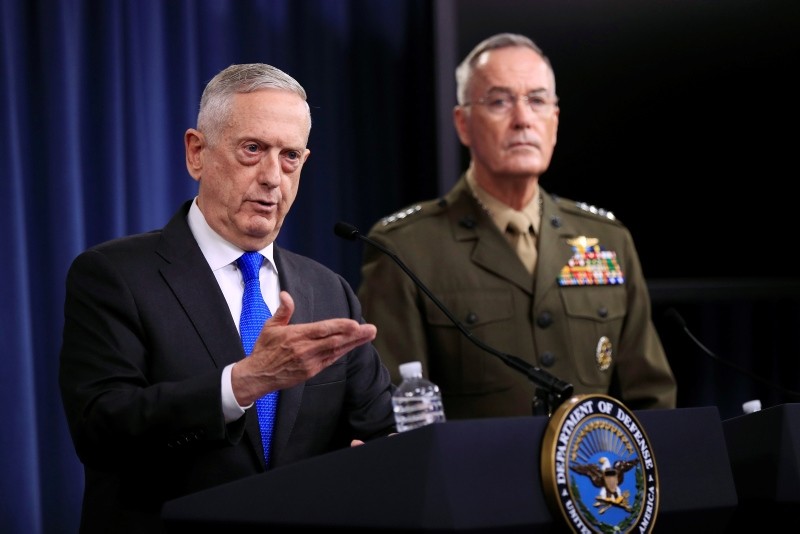 Secretary of Defense Jim Mattis, left, and Chairman of the Joint Chiefs of Staff, Marine Gen. Joseph Dunford speak to reporters during a news conference at the Pentagon, Tuesday, Aug. 28, 2018 in Washington. (AP Photo)
by Daily Sabah with Agencies Aug 28, 2018 12:00 am

Mattis said the U.S. has been working with Saudi Arabia and the United Arab Emirates to improve airstrike targeting and recognizes that tragedies have occurred. He said the U.S. is working to end that by constantly reviewing its support for the coalition and will continue to do all it can to limit civilian deaths.

A report for the U.N.'s Human Rights Council says the governments of Yemen, the United Arab Emirates and Saudi Arabia may have been responsible for war crimes during 3 and a half years of fighting against youths rebels there.

In December, Turkey officially signed a $2.5 billion agreement with Russia for the S-400s – Russia's most advanced long-range anti-aircraft missile system.

With the move, Turkey is set to become the first NATO member country to acquire the system.

No plans to suspend military exercises with South Korea

Mattis also said the Pentagon has no plans to suspend more military exercises with South Korea, Defense Secretary Jim Mattis, adding it had halted some major exercises as a good-faith gesture for talks with North Korea while others had continued.

"We took the step to suspend several of the largest exercises as a good-faith measure coming out of the Singapore summit," Mattis told reporters, referring to the June meeting between President Donald Trump and North Korean leader Kim Jong Un. "We have no plans at this time to suspend any more exercises," he said, adding that no decisions had yet been on major exercises for next year.