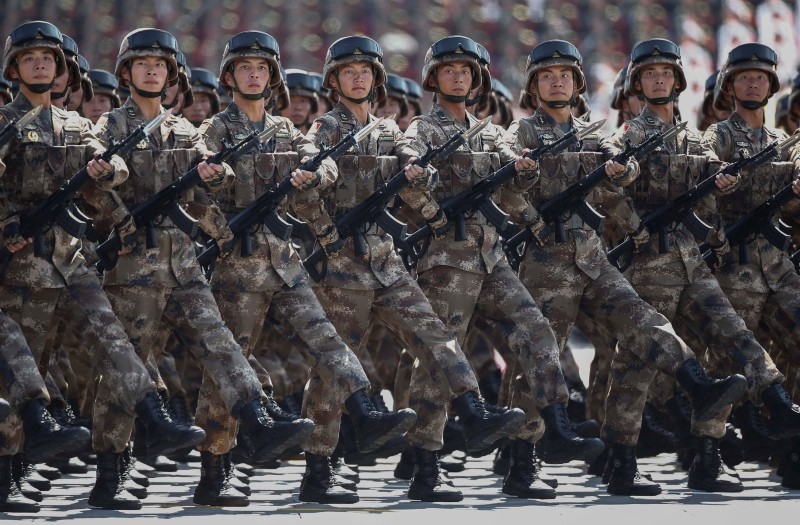 A file picture dated 03 September 2015 shows Chinese troops march during a military parade marking the 70th Anniversary of the 'Victory of Chinese People's Resistance against Japanese Aggression and World Anti-Fascist War'. (EPA Photo)
by Compiled from Wire Services Sep 21, 2018 12:00 am

China called on the United States on Friday to withdraw sanctions it imposed on a Chinese military organization for buying fighter jets and missile systems from Russia or "bear the consequences".

Foreign Ministry spokesman Geng Shuang said Beijing has lodged stern complaints with Washington over the action, which triggers a ban on entering the U.S., forbids conducting transactions with the U.S. financial system and forces the blocking of all property and interests in property within U.S. jurisdiction.

"China is strongly outraged by this unreasonable action by the U.S.," Geng told reporters at a daily news briefing. "We strongly urge the U.S. to immediately correct its mistakes and revoke the so-called sanctions. Otherwise, it must take all the consequences," Geng said, without giving details.
Meanwhile, Moscow warned the United States against "playing with fire."

"It would be good for them to remember there is such a concept as global stability which they are thoughtlessly undermining by whipping up tensions in Russian-American ties," deputy foreign minister Sergei Ryabkov said in a statement.

"Playing with fire is silly, it can become dangerous," he added.

"We recommend that Washington's operators of the sanctions machine at least superficially acquaint themselves with our history to stop going round in circles."

China's purchase of the weapons from Rosoboronexport, Russia's main arms exporter, violated a 2017 law, the Countering America's Adversaries Through Sanctions Act, intended to punish the government of President Vladimir Putin for interfering in U.S. elections and other activities.

The sanctions were enacted "to further impose costs on the Russian government in response to its malign activities," Nauert said in the statement. The U.S. will continue to "urge all countries to curtail relationships with Russia's defense and intelligence sectors, both of which are linked to malign activities worldwide," she added.