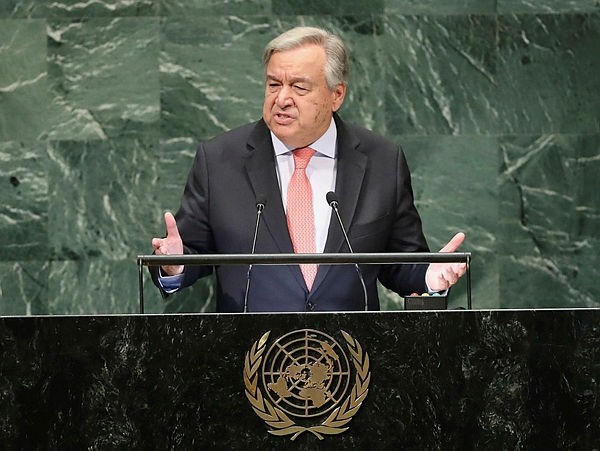 Antonio Guterres, secretary general of the United Nations, warned world leaders Tuesday that the world is "increasingly chaotic" and that shifts in the balance of power may gradually increase the risk of confrontation, though he did not point any fingers.

As U.S. President Donald Trump prepared to tout protection of U.S. sovereignty at the annual U.N. gathering of world leaders, Guterres told the 193-member U.N. General Assembly that multilateralism is under fire when it is needed most.

"Individual leaders have the duty to advance the well-being of their people," Guterres said. "But it runs deeper ... As guardians of the common good, we also have a duty to promote and support a reformed, reinvigorated and strengthened multilateral system."

He called for a renewed commitment to a rules-based order with the United Nations at its center and warned against a spreading "politics of pessimism."

"Those who see their neighbors as dangerous may cause a threat where there was none. Those who close their borders to regular migration only fuel the work of traffickers," Guterres said. "And those who ignore human rights in combating terrorism tend to breed the very extremism they are trying to end."

He also urged leaders to tackle climate change with a greater sense of ambition and urgency and said he would hold a summit on the issue in September next year. The Trump administration withdrew from a global accord to reduce emissions last year.

"If we do not change course in the next two years, we risk runaway climate change," Guterres said.

Guterres says that technology advances one of the "epochal challenges" facing the world and that the promise of such developing technologies as artificial intelligence, blockchain and biotech is tempered by risks and "serious dangers."

He notes that technology stands to change or eliminate some jobs and is a tool in the hands of terrorists, cybercriminals and creators of disinformation campaigns. And he worries about the possibility of artificially intelligent weapons that could choose their own targets.

Guterres declares that "the prospect of machines with the discretion and power to take human life is morally repugnant."

He also notes that people increasingly are getting information from social media feeds and outlets that echo their views and "reinforce tribalism."

This year, 133 world leaders have signed up to attend the General Assembly session which ends on Oct. 1, a significant increase from the 114 leaders last year. Virtually all 193 U.N. member nations will be represented, many of the rest by ministers.