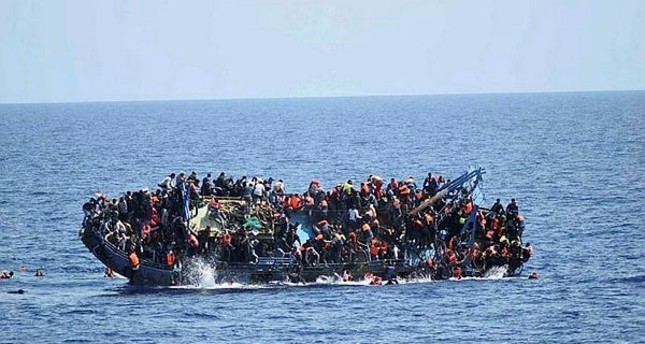 As more migrantsu2019 boats sank off the coast of Libya, 2016 becomes the deadliest year for migrants crossing the Mediterranean bound for Europe, the UN refugee agency noted. (File Photo)
by Daily Sabah with DPA
Oct 05, 2018 12:00 am

The number of migrants and refugees leaving Turkey to go to Greece is increasing, according to data released on Friday by the U.N. Refugee Agency (UNHCR).

By the end of September, 23,419 people had arrived in Greece, representing a 17 percent increase compared to the same period in 2017, the agency said in Athens.

Another 560 people landed on Greek islands in the Aegean Sea in the first four days of October, the migration ministry in Athens said.

Meanwhile, the number of arrivals coming in via the Maritsa river, which forms the border between Greece and Turkey, has doubled compared to last year.

In 2017, 5,500 migrants crossed the border river to enter Greece, whereas that number stood at around 12,000 in just the first nine months of 2018, Migration Minister Dimitris Vitsas told the Greek parliament.

Vitsas added that Greek authorities are planning on bringing more people to the mainland.

In the past 10 days, more than 2,000 migrants have been brought to camps in northern and central Greece, according to the coastguard, while another 19,000 are waiting on the islands to be transported.

The Greek government's goal is to reduce the number of arrivals waiting on the Aegean islands to 10,000.

Turkey and the European Union signed a deal in 2016 to curb illegal immigration through the dangerous Aegean Sea route from Turkey to Greece. Under the deal, Greece sends migrants held in the Aegean islands they crossed from nearby Turkish shores and in return, EU countries receive a number of Syrian migrants legally. The deal, reinforced with an escalated crackdown on human smugglers and more patrols in the Aegean, significantly decreased the number of illegal crossings.

However, some desperate migrants still take the better-policed land border between Turkey, Greece and Bulgaria, especially in winter months when a safe journey through the Aegean is nearly impossible aboard dinghies.

Especially the west of the Aegean Sea saw a large influx recently with more migrants boarding dinghies to reach Europe. They travel in overcrowded and unsafe boats to reach Greek islands scattered across the Aegean and only a few kilometers away from Turkish shores.