US, UK to revoke visas of Saudi officials implicated in Khashoggi's death 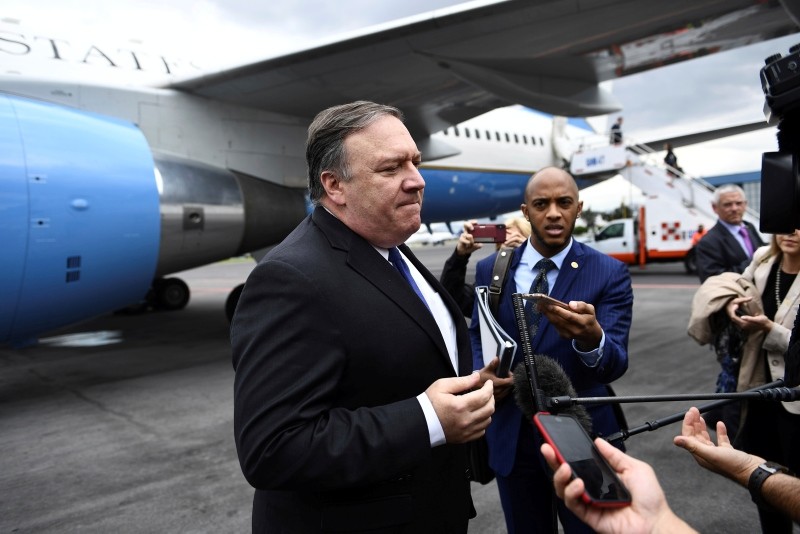 U.S. Secretary of State Mike Pompeo speaks to reporters before boarding his plane at the Mexico City International Airport on Friday, Oct. 19, 2018. (AP Photo)
by Compiled from Wire Services Oct 23, 2018 12:00 am

The U.S. and the U.K. said will revoke visas of a number of Saudi officials suspected of having ties to the killing of journalist Jamal Khashoggi in the kingdom's consulate in Istanbul.

U.S. Secretary of State Mike Pompeo said Tuesday that they are "taking appropriate actions" against the suspects, adding that some of those identified work for ministries and the royal court.

Members of Congress have repeatedly demanded that sanctions be imposed on Saudi Arabia over the killing of Khashoggi.

"These penalties will not be the last word on the matter from the United States," Pompeo told reporters. "We're making very clear that the United States does not tolerate this kind of ruthless action to silence Mr. Khashoggi, a journalist, through violence."

Washington is still awaiting all the facts, he said, adding that the killing "will not go without an American response."

Calling the killing a "horrific act," Pompeo vowed to work with Congress and allies abroad on a response.

Visa records are confidential and Pompeo was not more specific about who the revocations would affect, but the State Department later said 21 "Saudi suspects" would have visas revoked or would be declared ineligible to enter the U.S.

Meanwhile, Britain will prevent all suspects from entering the country, Prime Minister Theresa May said, adding she would speak to Saudi Arabia's King Salman on Wednesday.

"There does remain an urgent need to establish exactly what has happened in relation to this ... I myself expect to speak to King Salman later today," May told parliament.

"The Home Secretary is taking action against all suspects to prevent them entering the U.K., and if these individuals currently have visas, those visas will be revoked today."

Saudi authorities have so far detained 18 people in connection with Khashoggi's death, which officials say was accidental despite Turkish allegations that Khashoggi was intentionally killed.

The visa revocations are the first punitive measures taken by the administration against the Saudis since Khashoggi disappeared after entering the consulate on Oct. 2.

Khashoggi, who was a columnist for the Washington Post, disappeared after entering the Saudi consulate in Istanbul on October 2. Saudi officials initially said they did not know what had happened to him, but later said he died in a "fistfight" in the building.