Birthplace, bloodline and beyond: A look at how citizenship is granted around the world 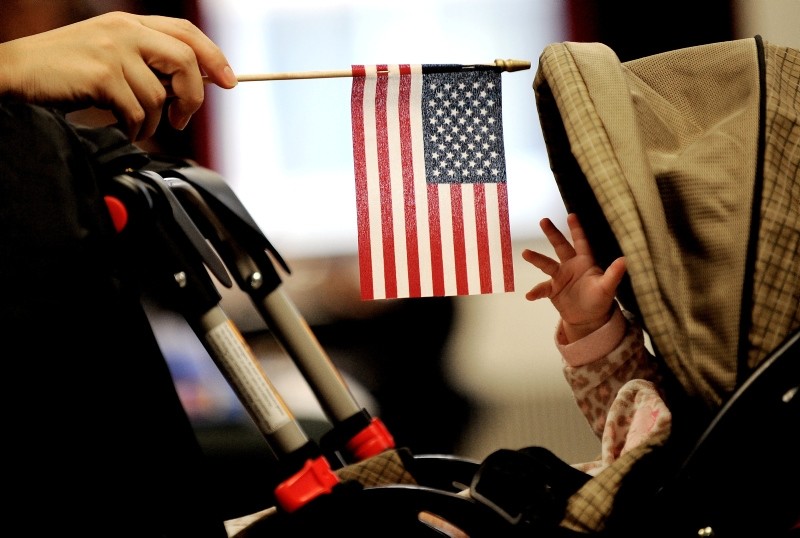 A baby reaches for an American flag held by her mother during naturalization ceremony at a federal building in New York, January 14, 2011. (EPA Photo)
by French Press Agency - AFP
Nov 02, 2018 12:00 am

U.S. President Donald Trump has vowed to abolish birthright laws that automatically give children born in the country the status of U.S. citizens regardless of the nationality of their parents.

Only around 30 other countries allow similar "jus soli", or "right of the soil", citizenship; most at least require one or both parents to also be citizens.

Here is a global snapshot:

Besides the United States, birthright citizenship is common in the Americas including in Argentina, Canada, Chile, Ecuador and Mexico.

It usually does not apply, however, for children born to foreign diplomats or military personnel.

An exception is Colombia where citizenship is granted if the parents are citizens or can prove they were residents at the time of birth.

Outside the Americas, Pakistan is one of the rare countries to grant "jus soli" citizenship.

It established this right in 1951 for any person born there after that date, apart from children of foreign diplomats and "of enemy alien born", which is taken to mean India.

For much of the rest of the world a child takes the citizenship of their parents in terms of "jus sanguinis", or the "right of blood".

Often this requires one or both parents to be citizens of the country concerned, unless they are determined to be stateless, as in the case of some refugees.

In Britain, for example, a child is granted citizenship if at least one parent is British or is officially "settled" and holds permanent residence.

All about the father

In the Middle East and North Africa "jus sanguinis" is often only accorded via the father.

An exception is Algeria, which grants citizenship through both the father and the mother.

In Asia, Afghanistan also follows the bloodline through the father only.

Some countries accord citizenship through both birthplace and bloodline, such as Belgium, France, Luxembourg and Spain.

A child born in Spain, for example, automatically becomes Spanish if at least one parent is also born there; if neither are Spanish citizens, the child would still have the right to citizenship after one year's residency.

Some countries have massively tightened their citizenship requirements in recent years to drop a simple "jus soli" birthright, such as Britain in 1983 and Australia in 1986.

India from 1987 required at least one parent to have citizenship and further restricted the law in 2004 to require both parents to be Indian.

In 2004 Ireland voted to remove the automatic right to citizenship by birth for children of foreign nationals by requiring the parents to have lived there for three out of four previous years.

Israel does not grant automatic birthright citizenship unless at least one parents is a citizen but it does have a "Law of Return" allowance for people married to a Jew or with a Jewish relative up to a grandparent.

Most countries also allow people to acquire citizenship as adults, for example through marriage or residency and often with other requirements, such as fluency in the national language or special contributions.

Cambodia granted citizenship to Angelina Jolie in 2005 for her charity and conservation work.