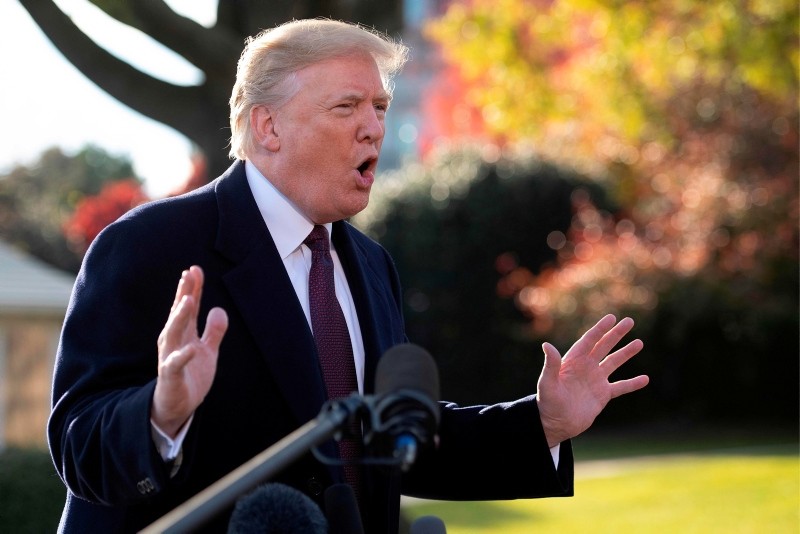 by Associated Press
Nov 21, 2018 12:00 am
President Donald Trump on Wednesday publicly thanked Saudi Arabia for plunging oil prices amid criticism over his decision not to further punish the kingdom for the killing of U.S.-based columnist Jamal Khashoggi.

Trump, who made clear in an exclamation-filled statement Tuesday that he feels that the benefits of good relations with the kingdom outweigh the possibility its crown prince ordered the killing, tweeted that it's "Great!" that oil prices are falling.

"Thank you to Saudi Arabia, but let's go lower!" he wrote from his Mar-a-Lago club in Palm Beach, Florida, where he's spending the Thanksgiving holiday.

The international crude benchmark, Brent, has fallen under $65 per barrel from a four-year high of over $86 in early October as the U.S., Saudi Arabia and Russia have all stepped up output.

The president on Tuesday condemned the brutal slaying of Khashoggi inside the Saudi consulate in Istanbul as a "horrible crime ... that our country does not condone." But he rejected calls by many in Congress, including members of his own party, for a tougher response, and he dismissed reports from U.S. intelligence agencies that Crown Prince Mohammed bin Salman must have at least known about such an audacious and intricate plot.

"It could very well be that the crown prince had knowledge of this tragic event," the president said. "Maybe he did and maybe he didn't!"

In many ways, the statement captured Trump's view of the world and foreign policy, grounded in economic necessity. It began with the words "America First!" followed by "The world is a very dangerous place!"

It came after weeks of debate over whether the president would or should come down hard on the Saudis and the crown prince in response to the killing of the Saudi columnist for The Washington Post who had criticized the royal family.

The U.S. earlier sanctioned 17 Saudi officials suspected of being responsible for or complicit in the Oct. 2 killing, but members of Congress have called for harsher actions, including canceling arms sales.

Trump said "foolishly canceling these contracts" worth billions of dollars would only benefit Russia and China, which would be next in line to supply the weapons. Critics, including high-ranking officials in other countries, denounced Trump's statement, saying he ignored human rights and granted Saudi Arabia a pass for economic reasons.

Asked by a reporter if he was saying that human rights are too expensive to fight for, Trump responded, "No, I'm not saying that at all." But then he switched the subject to the "terrorist nation" of Iran rather than any actions by Saudi Arabia.

The U.S. needs a "counterbalance" to Iran, "and Israel needs help, too," he said. "If we abandon Saudi Arabia, it would be a terrible mistake."

The mistake was Trump's, said Republican Sen. Rand Paul of Kentucky, contending the administration has "blinders on" in comparing Iran and Saudi Arabia.

"It's a sign of weakness not to stand up to Saudi Arabia," Paul said. "Sometimes when you have two evils, maybe you don't support either side."

Republican Lindsey Graham, the South Carolina senator who is close to Trump, also disagreed with the president's statement, saying America must not lose its "moral voice" on the international stage.

"It is not in our national security interests to look the other way when it comes to the brutal murder of Mr. Jamal Khashoggi," Graham said.

Likewise, Rep. Adam Schiff, ranking Democrat on the House intelligence committee, said to suggest that U.S. silence can be bought with arms sales "undermines respect for the office of the presidency, the credibility of our intelligence community and America's standing as a champion of human rights."

Trump's statement, issued just before he pardoned the Thanksgiving turkey at the White House and left for the long holiday weekend in Florida, underscored his world view of putting U.S. interests — both financial and geopolitical — above all else.

He told reporters on the South Lawn that oil prices would "skyrocket" if the U.S. broke with the Saudis, and he was not going to "destroy" the world's economy by being "foolish with Saudi Arabia."

Asked about any personal financial involvement, he said: "Saudi Arabia has nothing to do with me. What does have to do with me is putting America first."

Iran's foreign minister, Mohammad Javad Zarif, mocked Trump's announcement, tweeting that Trump "bizarrely devotes the FIRST paragraph of his shameful statement on Saudi atrocities to accuse IRAN of every sort of malfeasance he can think of."

Zarif went on to joke that "perhaps we're also responsible for the California fires, because we didn't help rake the forests— just like the Finns do?" He appeared to be referring to recent remarks in which Trump suggested raking the forest floor prevented fires in Finland and would have helped to prevent California's devastating wildfires.

Turkey's foreign minister, Mevlut Cavusoglu, called Khashoggi's killing "a humanitarian issue" and said it should not be covered up for the sake of maintaining trade ties with Saudi Arabia.

"It concerns a murder," Cavusoglu said. "It is not possible to say, 'Our trade will increase. Let's cover this up. Let's ignore it.'"

Trump said King Salman and Crown Prince Mohammed both "vigorously deny" any knowledge of the planning or execution of the killing. He also said the CIA has not made a conclusive determination about whether the crown prince ordered it.

A U.S. official familiar with the case told The Associated Press last week that intelligence officials had concluded that the crown prince, the kingdom's de facto leader, did order the killing. Others familiar with the case, however, have cautioned that while it's likely the crown prince had a role, there continue to be questions about the degree.

"We may never know all of the facts surrounding the murder of Mr. Jamal Khashoggi," Trump said. "In any case, our relationship is with the Kingdom of Saudi Arabia. They have been a great ally in our very important fight against Iran."

Saudi prosecutors say a 15-man team sent to Istanbul exceeded its authority when the lead negotiator in the team decided to kill Khashoggi for refusing orders to return. The Saudis say the agents dismembered his body, which has not been found.

Democrats on Capitol Hill called on the CIA and other top intelligence agencies to publicly report what it has learned about the killing.

The CIA had no comment on the president's statement. However, former Director John Brennan, a frequent Trump critic, tweeted: "Since Mr. Trump excels in dishonesty, it is now up to members of Congress to obtain & declassify the CIA findings on Jamal Khashoggi's death. No one in Saudi Arabia — most especially the Crown Prince —should escape accountability for such a heinous act."

Trump said he knew some members of Congress would disagree with his decision. He said he would listen to their ideas, but only if they were focused on U.S. national security.

Late last week, a bipartisan group of senators introduced legislation that calls for suspending weapons sales to Saudi Arabia, for sanctions on people who block humanitarian access in Yemen or support the Houthi rebels, and mandatory sanctions on those responsible for Khashoggi's death.

Democrats harshly criticized Trump's decision Tuesday and called on Congress to cut off arms sales to Saudi Arabia and end support for Saudi Arabia's war against the Iran-backed Houthi rebels in neighboring Yemen, which is facing a humanitarian crisis.

Democrat Dianne Feinstein of California, a member of the Senate intelligence committee, said Khashoggi was killed by agents of the Saudi government in a "premeditated murder, plain and simple," and she said she would introduce legislation requiring intelligence agencies to release an unclassified public assessment.

Secretary of State Mike Pompeo defended Trump's decision, saying, "We are determined to ensure that we continue to make sure that we take care of the American people in all of the strategic decisions we make about with whom we work with around the world."

The president opened his eight-paragraph statement chastising Iran for its proxy war against Saudi Arabia in Yemen, its activities in Iraq, its backing of the Syrian government of Bashar Assad and its support of militant groups, which Riyadh has pledged billions to fight.