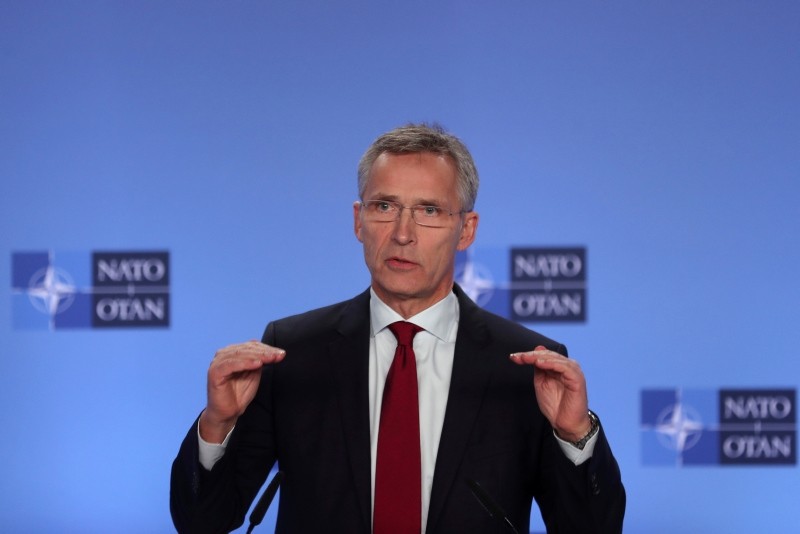 NATO Secretary General Jens Stoltenberg talks to journalists during a press conference at the NATO headquarters in Brussels, Monday, Nov. 26, 2018. (AP Photo)
by Compiled from Wire Services Nov 26, 2018 12:00 am

NATO head Jens Stoltenberg called on Russian on Monday to release Ukrainian navy ships and sailors, saying there was no justification for Moscow's actions.

"What we saw yesterday was very serious," Stoltenberg told a news conference after an emergency meeting of the Western military alliance held on request on Ukraine.

"All allies expressed full support for Ukraine's territorial integrity and sovereignty," he added. "There is no justification for the use of military force against Ukrainian ships and naval personnel so we call on Russia to release immediately the Ukrainian sailors and ships it seized yesterday."

U.S. Ambassador to the U.N. Nikki Haley said Russia has committed an "outrageous violation" of Ukraine's sovereignty by seizing several Ukrainian naval vessels near the disputed Crimea region, calling on Russia to "immediately cease its unlawful conduct" in the Black Sea.

"The United States will continue to stand with the people of Ukraine against this Russian aggression," she said.

"We call on Russia to respect its international obligations and not obstruct or harass Ukraine's transit in the Kerch Strait and to de-escalate the tension it has created," said the ambassador, adding that Washington would welcome "a normal relationship" with Moscow.

"But outlaw actions like this one continue to make that impossible," she added.

She warned that Russian escalation of this kind will further sour Russia's relations with the U.S. and many other countries and further increase tensions with Ukraine.

U.S. President Donald Trump on Monday said he does not like what is happening between Russia and Ukraine, a day after Russian crews seized Ukrainian vessels near Crimea.

"We do not like what's happening either way. And hopefully it will get straightened out," Trump told reporters as he left the White House.

Trump said European leaders were working on the situation. "They're not thrilled. We're all working on it together," he said.

The Ukrainian navy says Russian ships fired on and seized three of its artillery ships Sunday. The incident sharply escalated tensions that have been growing between the two countries since Moscow annexed Crimea from Ukraine in 2014.

Anne Gueguen, the French deputy permanent representative at the U.N., urged the release of the sailors and the vessels. She said Sunday's incidents show the need for de-escalation and a long term resolution to the dispute over Crimea.

Dmitry Polyanskiy, Russia's first deputy permanent representative to the United Nations, told the Security Council the weekend incident was another example of Ukrainian leaders trying to provoke Russia for political purposes. He claimed Porschenko needed a war ahead of the March election to gain support from the public.