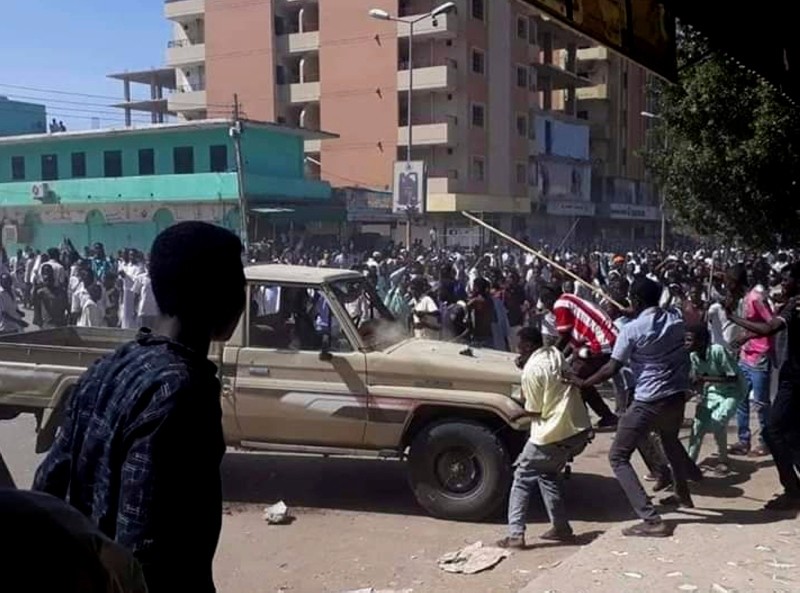 In this Sunday, Dec. 23, 2018 handout photo provided a Sudanese activist, people chant slogans and attack a national security vehicle during a protest, in Kordofan, Sudan. (AP Photo)
by Associated Press Dec 25, 2018 12:00 am

The United States, Britain, Norway and Canada say they are concerned by "credible reports" that Sudan's security forces have used live ammunition against demonstrators demanding that President Omar Bashir step down.

In a joint statement issued late Monday in Khartoum, the four nations urged all parties to avoid violence or the destruction of property while affirming the right of the Sudanese people to peacefully protest to express their "legitimate grievances."

Amnesty International meanwhile said it had "credible reports" that Sudanese police have killed 37 protesters in clashes during the anti-government demonstrations that erupted last week across much of the country.

It said the use of lethal force by security forces against unarmed protesters was "extremely troubling" given that more protests were planned Tuesday.

A coalition of independent professional unions has called for a march on the presidential palace in Khartoum later Tuesday to submit a petition demanding that President Omar Bashir, who rose to power in a 1989 military coup, step down. Two of Sudan's largest political parties called on their supporters to take part.

The protests began last Wednesday, initially over rising prices and shortages of food and fuel, but later escalated into calls for Bashir to go. The government has acknowledged fatalities during the protests but gave no figures. An opposition leader said over the weekend that 22 protesters were killed.

In a statement posted on the Facebook page of the U.S. Embassy, the four nations called on the government to "respond to demonstrations appropriately, through uniformed police acting in accordance with Sudanese and international human rights law."

They called on authorities to "avoid the use of live fire on protesters, arbitrary detention, and censorship of the media," and to investigate alleged abuses.

Police clashed with soccer fans late Monday after retired star players called on them to protest after a match in the capital, Khartoum. A similar protest took place in the capital's suburb of Omdurman Sunday night. There were no reports on casualties from the clashes.

Tuesday's planned march on the presidential palace has the potential to turn violent. The military vowed Sunday to rally behind the Sudanese leader and emphasized in a statement that it was operating in harmony with the police and Sudan's feared security agencies.

Bashir on Monday said his government would introduce measures to remedy the economy and "provide citizens with a dignified life." He also warned citizens against what he called "rumor mongers."

The demonstrations have been met with a heavy security crackdown, with authorities arresting more than a dozen opposition leaders, suspending school and university classes, and imposing emergency rule or nighttime curfews in several cities. There has also been a near-total news blackout on the protests.

Bashir, in his mid-70s, seized power in a 1989 military coup that overthrew an elected but ineffective government. He is wanted by the International Criminal Court for committing crimes against humanity and genocide in the western Darfur region.

Bashir has ordered the use of force against protesters in the past — including in the last round of unrest in January — successfully crushing them to remain one of the longest-serving leaders in the region. Although his time in power has seen one crisis after another, he is seeking a new term in office, with loyal lawmakers campaigning for constitutional amendments that would allow him to run in the 2020 election.

Sudan lost three quarters of its oil wealth when the mainly animist and Christian south seceded in 2011 after a long and ruinous civil war against the mainly Muslim and Arabized north. More recently, a currency devaluation caused prices to surge and a liquidity crunch forced the government to limit bank withdrawals, leading to long lines outside ATMs.