100,000 babies killed in warzones around the world every year: Save The Children 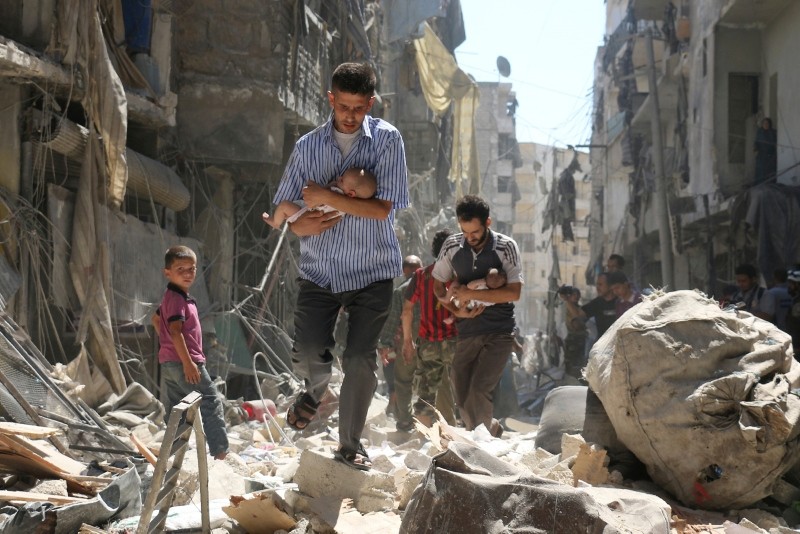 Photo shows Syrian men carrying babies as they make their way through the rubble of destroyed buildings following a reported air strike on Salihin neighborhood of the northern city of Aleppo, Syria, Sept. 11, 2016. (AFP/AP Photo)
by Feb 15, 2019 12:00 am

Starvation, disease and a lack of aid are killing 300 babies a day in warzones around the world, with the number of children caught up in conflicts nearing a 30-year high, Save the Children said on Friday.

Afghanistan, Yemen, South Sudan, Central African Republic and Syria were among the worst conflict zones for children in 2017, the charity concluded from an analysis of U.N. data for the five years to the end of that year.

In all, more than 500,000 babies died during the period from the knock-on effects of conflict - hunger, hospital attacks and reduced aid - according to the data, which excludes those killed in attacks.

"From Yemen to Syria and South Sudan, children are bearing the horror of armed conflict," said Kevin Watkins, head of Save the Children, in a statement.

Yemen's almost four-year war has killed tens of thousands of people, caused the economy to collapse and brought millions of people to the brink of famine, according to the United Nations.

Children there are at risk of malnutrition, diarrhoea, cholera, and diphtheria - a disease that spreads as easily as the common cold, said Save the Children.

Five million children in Africa have died over the last 20 years because armed conflict deprived them of access to basic healthcare or clean water, the Lancet medical journal said in a report last year.

Save the Children said a fifth of all children worldwide - about 420 million - lived in a conflict zone in 2017, 30 million more than the year before and the highest number since 1990.

"Some are treated as collateral damage in urban bombing. Others are deliberately targeted for killing, abduction and recruitment by armed groups. Millions go hungry because humanitarian aid is obstructed," Watkins said.

"The war on children must end, and those who commit crimes against children will be held to account," he added.