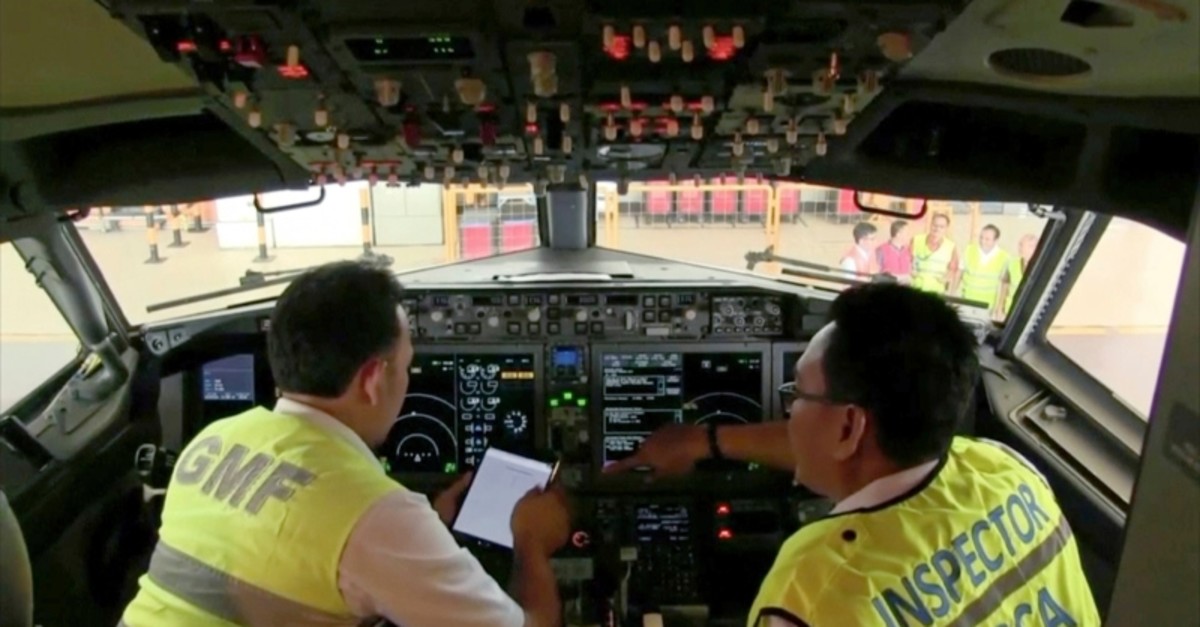 In this image from video taken on Tuesday, March 12, 2019, officials make inspection inside the cockpit of a Boeing 737 Max 8 aircraft is in hangar at Garuda Maintenance Facility at Soekarno Hatta airport, Jakarta. (AP Photo)
by Daily Sabah with Agencies Mar 14, 2019 3:48 pm

Amid growing distress over aircraft safety, it seems that the accounts of the recent crashes were echoed last year in concerns registered by U.S. pilots on how the Boeing 737 Max 8 (mis)behaves.

According to documents on the Aviation Safety Reporting System, a voluntary incident database maintained by NASA, at least four American pilots made reports following the Lion Air crash that killed 189 last year, all complaining the aircraft suddenly pitched downward shortly after takeoff,

In two anonymous reports on flights just after the Lion Air crash, pilots disconnected the autopilot and corrected the plane's trajectory.

One said the flight crew reviewed the incident "at length... but can't think of any reason the aircraft would pitch nose-down so aggressively."

It was unclear whether the accounts led to any actions by the FAA or the pilots' airlines.

Questions about the Lion Air crash in Indonesia have honed in on an automated stall prevention system, the MCAS, designed to automatically point the nose of the plane downward if it is in danger of stalling.

According to the flight data recorder, the pilots of Lion Air Flight 610 struggled to control the aircraft as the MCAS repeatedly pushed the plane's nose down following takeoff.

The Ethiopian Airlines pilots reported similar difficulties before their aircraft plunged into the ground as they tried to return to the airport.

Indonesian investigators have not stated a definite cause for the Lion Air crash, but are examining whether faulty readings from a sensor might have triggered an automatic nose-down command to the plane, which the Lion Air pilots fought unsuccessfully to overcome. The automated system kicks in if sensors indicate that a plane is about to lose lift, or go into an aerodynamic stall. Gaining speed by diving can prevent a stall.

The Lion Air plane's flight data recorder showed problems with an airspeed indicator on four flights, although the airline initially said the problem was fixed.

Boeing was criticized after the Lion Air crash for allegedly failing to adequately inform 737 pilots about the functioning of the stall prevention system.

Andrew Hunter, a defense industry expert at the Center for Strategic and International Studies in Washington, said that, while Boeing and the FAA had good track records on addressing safety concerns, sometimes the combination of automated systems and humans did not work smoothly.

"It is hard to get a system to work seamlessly with human beings," he said.

"The fact that the system was fighting the pilot was not an unintended consequence," because it should counteract a pilot error and correcting this is "challenging."

Sunday's Ethiopian Airlines crash was the second fatal flight for a Boeing 737 Max 8 in just five months. The plane crashed six minutes after takeoff, killing all 157 people on board. More than 40 countries, including the U.S., have now grounded the planes or refused to let them into their airspace.