Landmark UN plastic waste deal to save oceans agreed by more than 180 nations, except for US 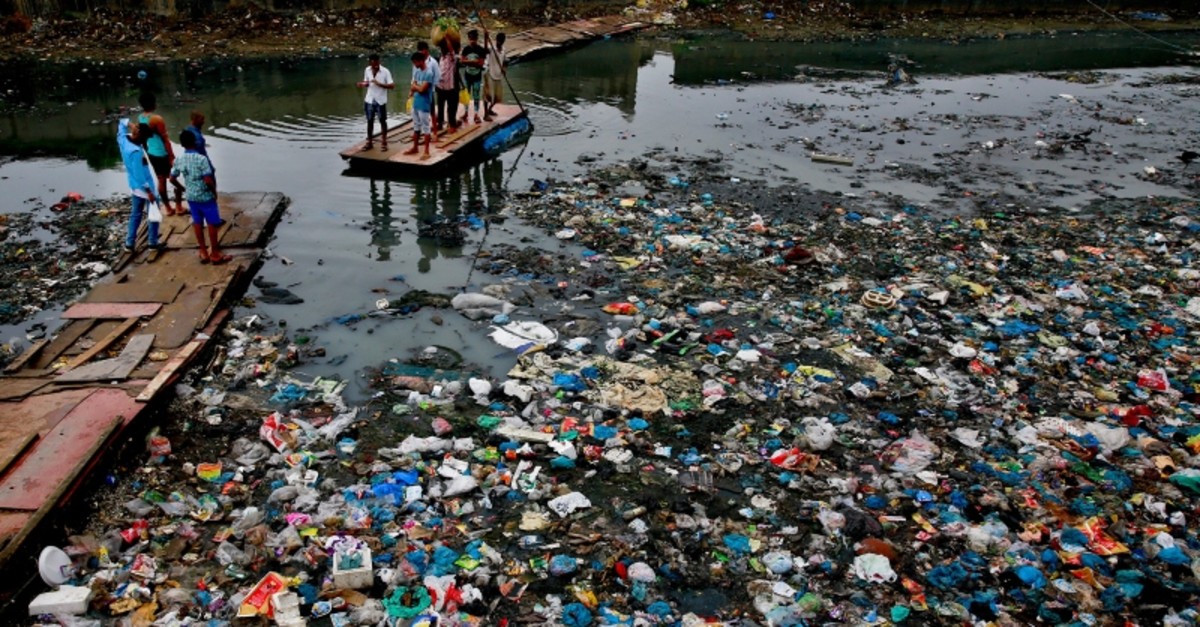 In this Sunday, Oct. 2, 2016 file photo, a man guides a raft through a polluted canal littered with plastic bags and other garbage in Mumbai, India. (AP Photo)
by Compiled from Wire Services May 11, 2019 1:11 pm

Nearly every country in the world has agreed upon a legally binding framework to reduce the pollution from plastic waste except for the United States, U.N. environmental officials say.

An agreement on tracking thousands of types of plastic waste emerged Friday at the end of a two-week meeting of U.N.-backed conventions on plastic waste and toxic, hazardous chemicals.

Rolph Payet of the United Nations Environment Program (UNEP) said the "historic" agreement linked to the 186-country, U.N.-supported Basel Convention signed in 1989 means that countries will have to monitor and track the movements of plastic waste outside their borders.

The 1,400 representatives meeting in Geneva reached the agreement after 12 days' discussion on what Payet called "one of the world's most pressing environmental issues".

The deal affects products used in a broad array of industries, such as health care, technology, aerospace, fashion, food and beverages.

"It's sending a very strong political signal to the rest of the world — to the private sector, to the consumer market — that we need to do something," Payet said. "Countries have decided to do something which will translate into real action on the ground."

Countries will have to figure out their own ways of adhering to the accord, Payet said. Even the few countries that did not sign it, like the United States, could be affected by the accord when they ship plastic waste to countries that are on board with the deal.

Payet credited Norway for leading the initiative, which first was presented in September. The time from that proposal to the approval of a deal set a blistering pace by traditional U.N. standards for such an accord.

The framework "is historic in the sense that it is legally binding," Payet said. "They (the countries) have managed to use an existing international instrument to put in place those measures."

The agreement is likely to lead to customs agents being on the lookout for electronic waste or other types of potentially hazardous waste more than before.

"There is going to be a transparent and traceable system for the export and import of plastic waste," Payet said.

The new rules will take a year to come into force. But Payet said the signatory countries had said they did not want any delay, adding that the plan was to "hit the ground running."

"For far too long developed countries like the U.S. and Canada have been exporting their mixed toxic plastic wastes to developing Asian countries claiming it would be recycled in the receiving country.

"Instead, much of this contaminated mixed waste cannot be recycled and is instead dumped or burned, or finds its way into the ocean," said IPEN science advisor Sara Brosche.

"Pollution from plastic waste, acknowledged as a major environmental problem of global concern, has reached epidemic proportions with an estimated 100 million tonnes of plastic now found in the oceans, 80-90% of which comes from land-based sources," the statement said.

Dicofol and Perfluorooctanoic Acid, plus related compounds. The latter has been used in a wide variety of industrial and domestic applications including non-stick cookware and food processing equipment, as well as carpets, paper and paints.

The European Union coordinates and directs environmental protection for its members, through the regulation of industry and the setting of green policy goals.

Officials attributed the progress partly to growing public awareness worldwide - reinforced by documentary films by British naturalist David Attenborough and others - of the dangers of plastic pollution to marine life.

Marco Lambertini, director general of environmental charity WWF International, said that for too long wealthy countries had abdicated responsibility for enormous quantities of plastic waste and that the new accord was a highly welcome step towards redressing the imbalance and restoring some accountability.

"However, it only goes part of the way. What we - and the planet - need is a comprehensive treaty to tackle the global plastic crisis," he added.

Payet said the new rules should have a significant impact on ocean pollution and ensure that plastics "do not end up where they should not end up".

"It was those iconic images of the dead albatross chicks on the Pacific Islands with their stomachs open and all recognizable plastic items inside it, and most recently, it's been when we discovered the nano-particles do cross the blood-brain barrier, and we were able to prove that plastic is in us," Rose said.

An online petition entitled "Stop dumping plastic in paradise!" has attracted almost a million signatures in the past week.