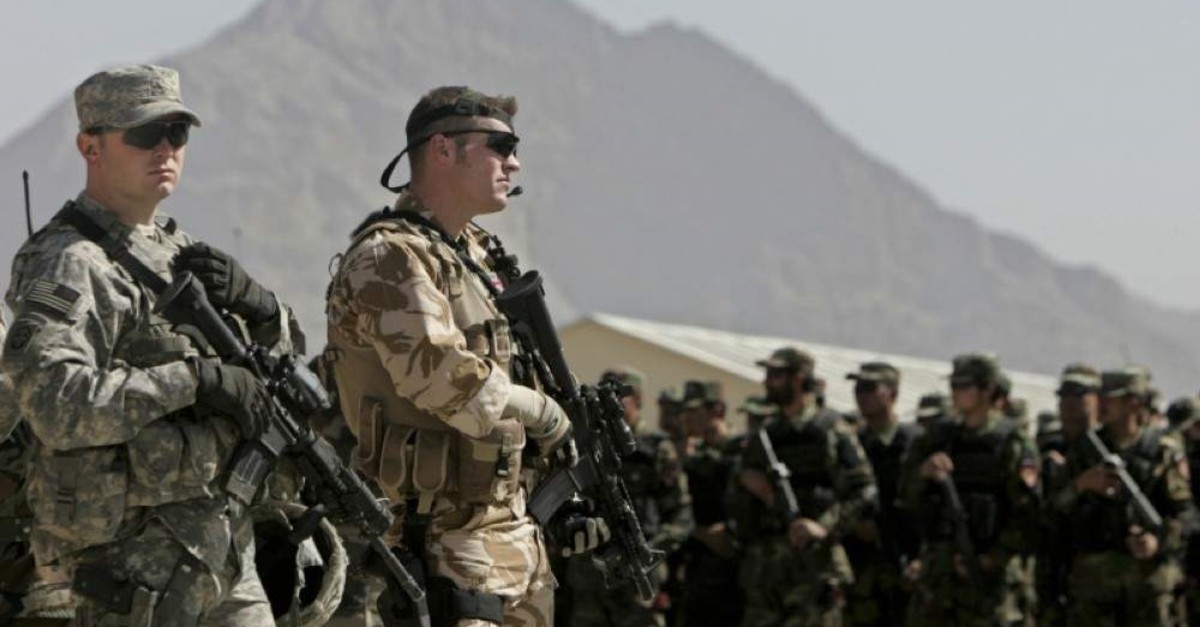 A US soldier(L) and a British soldier with the NATO-led International Security Assistance Force ISAF stand guard during the graduation ceremony in Kabul. (Reuters Photo)
by Compiled from Wire Services Nov 18, 2019 6:06 pm

The International Criminal Court (ICC) said on Monday it would assess the allegations into alleged war crimes by the British army in Iraq and Afghanistan.

The court would "independently assess” the findings of an investigation by The Times and Panorama program, the ICC’s Office Prosecutor was quoted as saying by a BBC report.

The prosecutor also said the findings could be "highly relevant" to make a decision on a potential probe into the allegations.

A series of leaked government documents suggested on Sunday that the British army has covered up various war crimes committed during campaigns in Iraq and Afghanistan, according to local media.

An investigation by The Times and BBC Panorama found out that "evidence implicating British soldiers in the murder of children and the torture of civilians was covered up by military commanders.”

The Times said evidence had been discovered of "murders by an SAS [Special Air Service] soldier and deaths in custody, beatings, torture and degrading sexual abuse of detainees by members of the Black Watch (3rd Battalion, Royal Regiment of Scotland).”

The military detectives also discovered "allegations of the falsification of documents serious enough to merit prosecutions of senior officers,” according to the report.

Investigators from the inquiries have expressed frustration that compelling evidence was swept aside for political reasons, according to the British broadsheet.

"The Ministry of Defence (MoD) had no intention of prosecuting any soldier of whatever rank he was unless it was absolutely necessary, and they couldn't wriggle their way out of it," an investigator told the BBC.

"Key decisions were being taken out of our hands,” the investigator said, adding: "There was more and more pressure coming from the Ministry of Defence to get cases closed as quickly as possible.”

The Times elaborated on the cases under investigation and said the crimes included the murder of three children and one young man shot in Afghanistan in October 2012 by a SAS soldier and widespread abuse of prisoners in the 2003 summer at Camp Stephen, in Basra, Iraq and deaths of two detainees in custody.

Another crime looked into by the investigators was the fatal shooting of an Iraqi policeman in August 2003, which was covered up based on a soldier’s witness account. The soldier later said the evidence was fabricated without his knowledge.

The MoD rejected the allegations in a statement, saying their alleged interference in cases was "untrue.”

"Allegations that the MoD interfered with investigations or prosecution decisions relating to the conduct of U.K. forces in Iraq and Afghanistan are untrue,” the MoD said.

"Throughout the process the decisions of prosecutors and the investigators have been independent of the MoD and involved external oversight and legal advice,” a statement said.

The Service Police "have carried out extensive investigations into allegations about the conduct of U.K. forces in both Iraq and Afghanistan,” and the independent Service Prosecuting Authority decided not to prosecute any of the cases referred to it, according to the ministry.

The accusations emerged from two war crimes inquiries – the Iraq Historic Allegations Team (IHAT) and Operation Northmoor, which dealt with Afghanistan – which ended in 2017 without any prosecutions.

A documentary of the alleged crimes will be aired Monday evening by the BBC Panorama program.