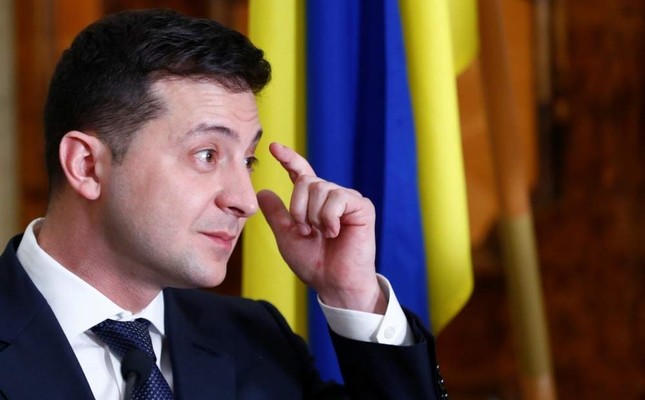 Ukraine's president renewed Monday his denial of a quid pro quo with U.S. counterpart Donald Trump over military aid, despite a growing case against the American president in impeachment proceedings in Washington.

"I did not speak with U.S. President Trump in those terms: you give me this, I give you that," Volodymyr Zelenskyy said in an interview with European publications including Germany's Der Spiegel magazine.

In remarks published in German, Zelenskyy said he "did not understand at all" the accusations heard at the hearings and did not "want to give an impression that we are beggars" in Ukraine.

The scandal centers around a phone conversation on July 25 in which the Republican leader is suspected of putting pressure on Ukraine to launch investigations against former Democratic Vice President Joe Biden and his son Hunter, who worked for a Ukrainian gas company.

The key issue is whether Trump set up a "quid pro quo" — Latin for seeking one action in exchange for another — with Zelenskyy by holding back promised U.S. military aid for Ukraine until the Bidens were investigated.

The U.S. House impeachment report on Trump will be unveiled Monday behind closed doors for key lawmakers as Democrats push ahead with the inquiry despite the White House’s declaration it will not participate in the first Judiciary Committee hearing.

The Democratic majority on the House Intelligence Committee says the report, compiled after weeks of testimony, will speak for itself in laying out what Chairman Adam Schiff, D-Calif., called the evidence of “wrongdoing and misconduct” by the president over his actions toward Ukraine. It was being made available for committee members to review ahead of a vote Tuesday to send it to the Judiciary Committee for Wednesday’s landmark hearing.

As the impeachment inquiry intensified, Wednesday’s hearing will be a milestone. It is expected to convene legal experts whose testimony, alongside the report from the Intelligence Committee, could lay the groundwork for possible articles of impeachment, which the panel is expected to soon draw up.

Trump maintains he did nothing wrong, and as the House presses forward on an ambitious schedule toward an impeachment vote, the president and his Republican allies are aligned against the process.

Share on Facebook Share on Twitter
Previous in World Samoa’s government said Monday that another five children had died... Next in World A menacing white foam covered one of India's most famous beaches in...
DAILY SABAH RECOMMENDS