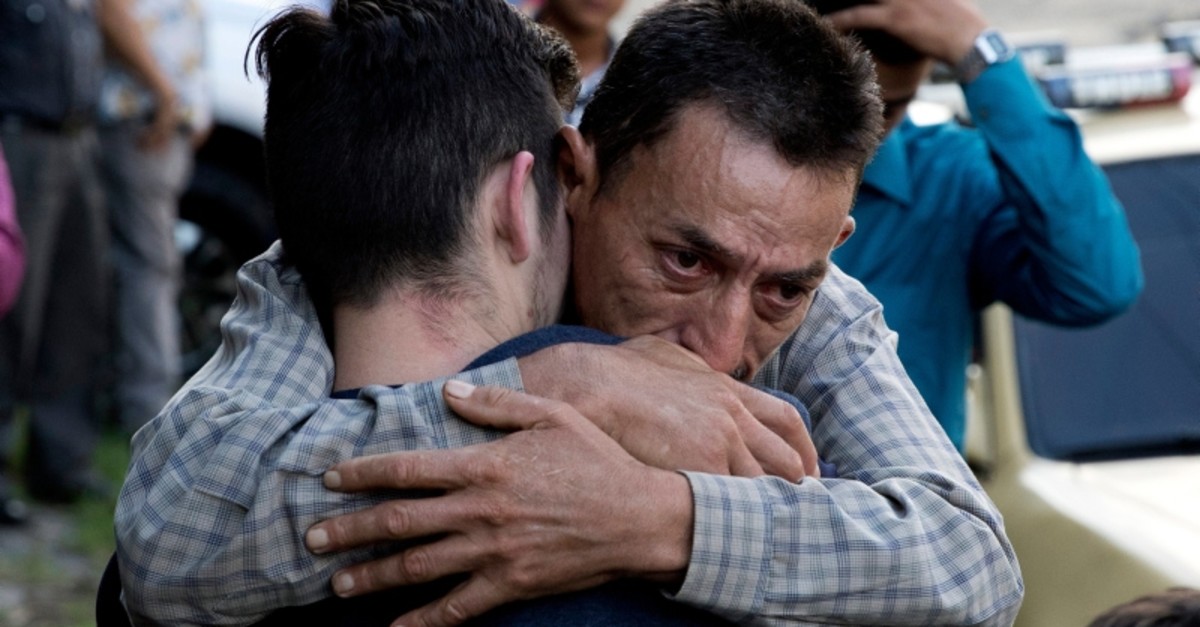 In this Oct. 9, 2019 photo, a father hugs his son outside the Migrant Assistance Office in San Salvador, El Salvador. Buses with deported Salvadorans, such as the son, arrive every day from the U.S. and Mexico. (AP Photo)
by Anadolu Agency Dec 18, 2019 4:14 pm
United Nations member states on Wednesday marked the annual International Migrants Day under the theme "We Together."
Antonio Guterres, the U.N. secretary-general, said in a message marking the day that all migrants are entitled to equal protection of their human rights.
"On this International Day, I urge leaders and people everywhere to bring the Global Compact to life, so that migration works for all," Guterres said in a statement.
According to a new report by the U.N.'s International Organization for Migration (IOM), over the last 20 years the number of global migrants has ballooned from 150 million to 272 million.
More than half of all the migrants -- an estimated 141 million -- lived in Europe and North America.
"India has the largest numbers of migrants around 17.5 million living abroad, followed by Mexico 11.8 million and China with 10.7 million," the IOM report says.
The report shows that 31 million children worldwide are migrants, including 13 million refugees and 17 million children displaced due to conflicts and violence inside their countries.
Rising tide of refugees
According to the report, the number of refugees also rose from 14 million to 25.9 million over last two decades due to conflicts and climate change in many countries of the world.
Turkey hosts the largest number of Syrian refugees around 3.7 million, followed by Pakistan with 1.4 million registered refugees.
On Tuesday, President Recep Tayyip Erdoğan told the Global Refugee Forum in Geneva, Switzerland that Turkey has carried the responsibility for the refugees alone for nine years on behalf of the international community.
"I am not saying this as the president of a country far from conflicts and irregular migration. According to U.N. figures, I am the president of a country that hosts the most asylum seekers in the world," said Erdoğan.
Turkey is currently hosting 5 million refugees and has never forcefully repatriated any of them, he added.
Also speaking at the forum, Pakistani Premier Imran Khan said that his country was born out of the biggest refugee problem in the history of mankind.
"I am very proud to say that Pakistan hosted at one point 4 million refugees. And still, after 40 years, Pakistan still has 1.4 million registered refugees," said Khan.
International remittances rise
According to the World Bank report, the annual flow of remittances to low and middle-income countries -- often from migrant workers to their home countries -- reached $529 billion in 2018, up 9.6% from the previous record high of $483 billion in 2017.
India, China and Mexico remained the top three remittance recipient countries, getting $181.7 billion annually. The U.S. remained the top remittance-sending country with $68 billion followed by the United Arab Emirates with $44.4 billion.
Internal displacement
Internal displacement due to violence and conflict also rose in many countries to 41.3 million people.
Syria remained the hardest-hit country, with 6.1 million people displaced, followed by Colombia with 5.8 million and the Democratic Republic of Congo with 3.1 million, IOM said in its report.
The number of stateless people also reached 3.9 million with Bangladesh with around 90,600 stateless persons, followed by Ivory Coast with 69,2000, and Myanmar with 62,0000.
Last Update: Dec 20, 2019 2:30 am
RELATED TOPICS