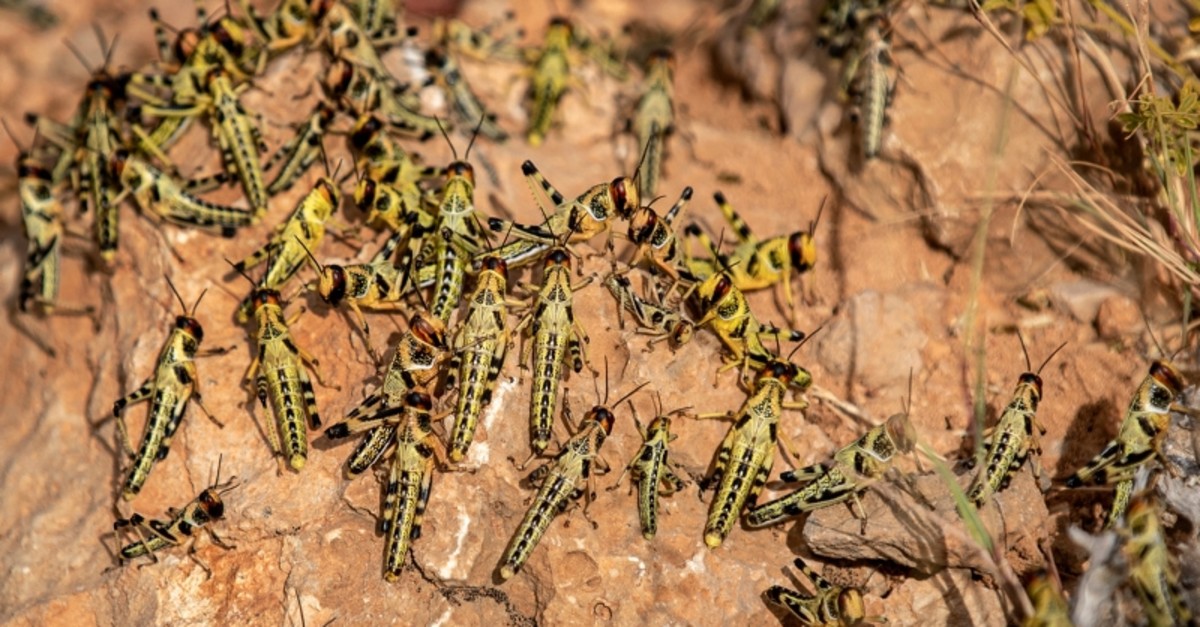 In this photo taken Wednesday, Feb. 5, 2020, young desert locusts that have not yet grown wings crowd together on a rock in the desert near Garowe, in the semi-autonomous Puntland region of Somalia. (AP Photo)
by Daily Sabah with Agencies Feb 11, 2020 12:47 pm

In the face of the biggest locust outbreak that parts of East Africa have seen in decades, the impact on the region's food supply could be enormous: A locust swarm of a square kilometer is able to eat the same amount of food in one day as 35,000 people, according to the U.N. Food and Agriculture Organization (FAO).

The swarms have already devoured tens of thousands of hectares of crops, such as maize and sorghum, and ravaged pastures for livestock. The food shortages are expected to increase in a region where up to 25 million people are reeling from three consecutive years of droughts and floods. By June, the fast-breeding locusts could grow by 500 times and move into South Sudan.

The U.N. warned Monday that “we simply cannot afford another major shock” to an already vulnerable region. An emergency government meeting hours after the locusts were spotted inside Uganda on Sunday decided to deploy military forces to help with ground-based pesticide spraying, while two planes for aerial spraying will arrive as soon as possible, a statement said. Aerial spraying is considered the only effective control.

Hundreds of millions of the voracious insects have swept across Ethiopia, Somalia and Kenya in what the U.N. has called the worst outbreak in a quarter of a century, with Uganda, Eritrea and Djibouti also affected. Authorities in those countries are already carrying out aerial spraying of pesticides, but experts say the scale of the infestation is beyond local capacity as desert locusts can travel up to 150 kilometers (95 miles) in a day. The insects have exploited favorable wet conditions after unusually heavy rains, and experts say climate change is expected to bring more of the same.

The U.N. undersecretary-general for humanitarian affairs called on the international community Monday to help East African countries affected by locust swarms, expressing his deep concern over the situation. "There are 13 million people in the affected countries who are severely food insecure now," said Mark Lowcock during a U.N. press conference. "Ten million of those people are in the places affected by locusts.” According to Lowcock, the U.N. Food and Agriculture Organization (FAO) estimated at the end of January that a locust control plan would cost $76 million. "What we have so far is just $20 million," he said.