One in six children grows up in a conflict zone, report says 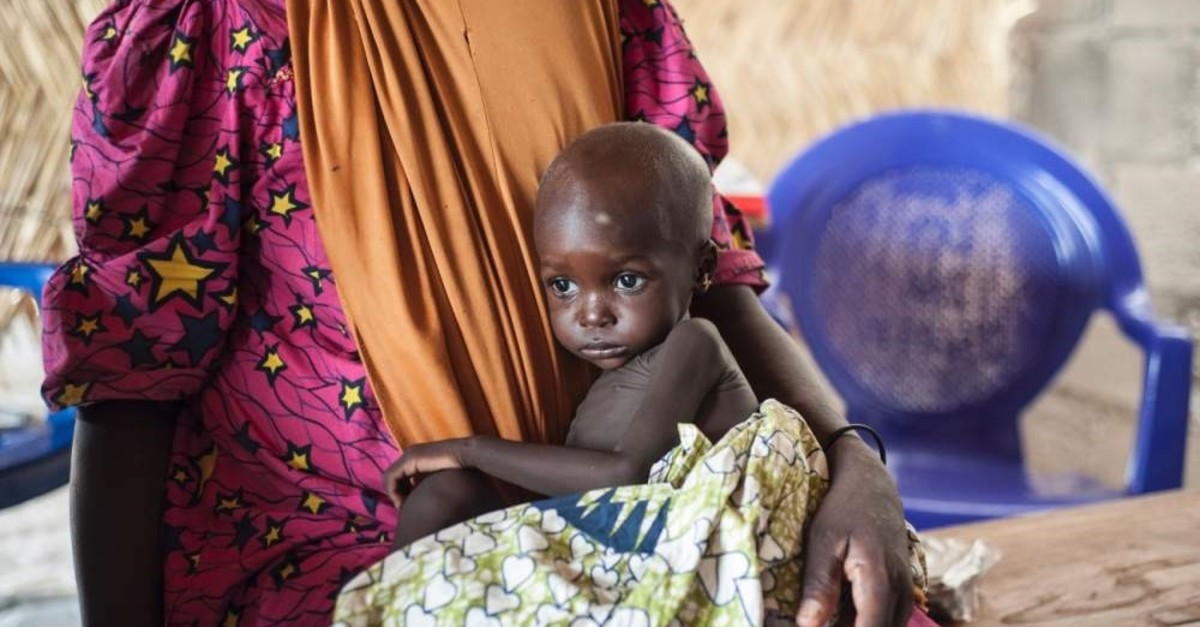 A young girl suffers from severe acute malnutrition sitting on her mother's lap in the outskirts of Maiduguri capital of Borno State, June 30, 2016. (AFP Photo)
by Daily Sabah with AFP Feb 13, 2020 1:05 pm

A record number of children grow up in war zones, facing increasing threat of sexual violence and death every day with children in Africa are the most affected, a study by the charity Save the Children reported

Nearly one in six children around the world, some 415 million children are surrounded by war, sexual abuse, recruitment into armed groups in the conflict zones while facing a greater risk of death and injury than ever before, according to a report released on Thursday by the charity Save the Children.

"It's staggering that the world stands by while children are targeted with impunity," the charity's Chief Executive Inger Ashing said in a statement to accompany the report. "Since 2005, at least 95,000 children were recorded to have been killed or maimed, tens of thousands of children abducted, and millions of children denied access to education or health services after their hospitals were attacked." Ashing warned that "the destruction of children's lives" will continue if nothing is done and those responsible for crimes are not brought to account while urging governments to do more to protect children from the effects of war and serious violence.

The report listed grave violations faced by children in the conflict zones, including killing and maiming, recruitment by armed forces, abduction, attacks on schools or hospitals, denial of humanitarian access, and rape and other forms of sexual violence.

The report also analyzed different threats faced by boys and girls for the first time. "Girls are at far higher risk of sexual and other forms of gender-based violence, including child, early and forced marriage," the study found. "Boys are much more likely to be exposed to killing and maiming, abductions and recruitment," it added.

Children living in Africa were the worst affected, with 170 million living in war zones, although a higher proportion were hit in the Middle East, where almost one in three were surrounded by conflict.

A surge in violence and insecurity in the central Sahel region in Africa has left 5 million children vulnerable as they will be in urgent need of humanitarian assistance this year, up from 4.3 million, UNICEF warned in a report released last month. As the militant conflict rages across the region, hundreds of children in the Sahel were killed, maimed or forcibly separated from their parents last year, the U.N. said. In Mali alone, 277 children were killed or maimed during the first nine months of 2019, UNICEF said in a report, more than double the number in the year before.

For individual countries, the situation was worst in Afghanistan followed by the Central African Republic, the Democratic Republic of the Congo, Iraq and Mali. Based on the statistics released by the U.N., an average of nine children have been killed or wounded per day in the country in 2019. From 2009 to 2018, close to 6,500 children were killed and some 15,000 others were wounded as a result of the ongoing conflict, making Afghanistan the deadliest war zone worldwide in 2018, based on the report.

Mali is the only country for which there are hard figures on the number of child war victims. But nonetheless, children in Burkina Faso and Niger have also been murdered, sexually abused, kidnapped or pressed into armed groups, the U.N. said. The spiraling conflict had also forced about 1.2 million to flee their homes as of November, a twofold increase since 2018, of whom more than half are children.