Netanyahu announces thousands of new illegal settlements ahead of elections 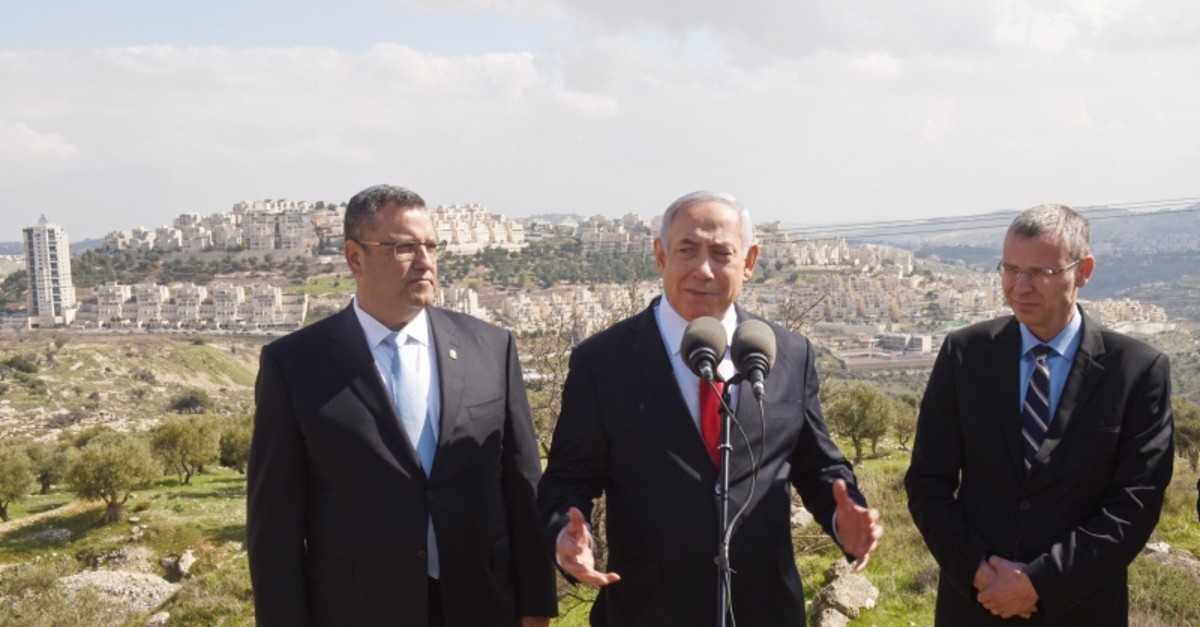 Israeli Prime Minister Benjamin Netanyahu, who failed to win the majority of the votes in previous elections, announced plans on Thursday to build thousands of new homes for Jewish settlers in annexed east Jerusalem, a project unveiled less than two weeks before the general election.

"I have huge news today: We're adding another 2,200 units to Har Homa," Netanyahu said in a video message, in which he also announced approval for a new settlement with several thousand homes in another part of east Jerusalem. The contentious Har Homa community was first built in 1997, during a previous Netanyahu government. The prime minister said he had approved that initial construction "despite objections from the entire world" and estimated that Har Homa's population would grow from 40,000 to 50,000 when the new units are complete.

Palestinians condemned Netanyahu's plan to build thousands of new settler homes in east Jerusalem as a pre-election tactic that risks fueling further violence. "Netanyahu's attempts to win right-wing Israeli votes on the eve of the Israeli elections at the expense of Palestinian rights will not bring peace and stability to anyone, and will lead to more tension and violence in the region," said a statement from a spokesman for Palestinian president Mahmud Abbas, published by the official WAFA news agency.

Netanyahu also announced approval to build a new settlement with several thousand homes in Givat Hamatos, next to the mainly Palestinian east Jerusalem neighborhood of Beit Safafa. The new community will include 3,000 homes for Jewish residents and 1,000 "for the Arab residents of Beit Safafa," Netanyahu said. Watchdog Peace Now called the Givat Hamatos project "a severe blow to the two-state solution," as it would interrupt "territorial continuity between Bethlehem and east Jerusalem."

Peace Now argued that Netanyahu lacked the mandate to approve the contentious projects. "Such a change of policy can't happen in a transitional government without a mandate from the public," it said.

In an effort to seek votes from Arab citizens for his Likud party, Netanyahu promised to implement direct flights from Tel Aviv to Mecca, in Saudi Arabia, in a Facebook post which was deleted moments after going live online. Written in both Arabic and Hebrew, Netanyahu said, “We are working to introduce direct flights from Tel Aviv to Mecca for the benefit of Muslim pilgrims who intend to perform the Hajj,” according to a report by Maariv.

Arab-Muslim Israeli politician and leader of the Arab Movement for Change slammed Netanyahu, describing the Facebook post as a “Bibi-lie.” “Is there anything more pitiful than Netanyahu attempting to win Arab votes by the lie of helping pilgrims?” he asked, as reported by the Jerusalem Post.

Israel will hold elections on March 2, the third vote in less than a year. Like the previous elections in April and September, the upcoming vote is seen largely as a personal referendum on Netanyahu. The previous elections ended in deadlock, with both Netanyahu’s Likud Party and the rival Blue and White, led by former military chief Benny Gantz, unable to secure parliamentary majorities. Opinion polls have predicted a similar outcome in the third. In addition, his criminal trial which will begin March 17 has shaken up the final stretch of a contentious election campaign and hurt the longtime Israeli leader’s hopes of forming a new government after the vote.