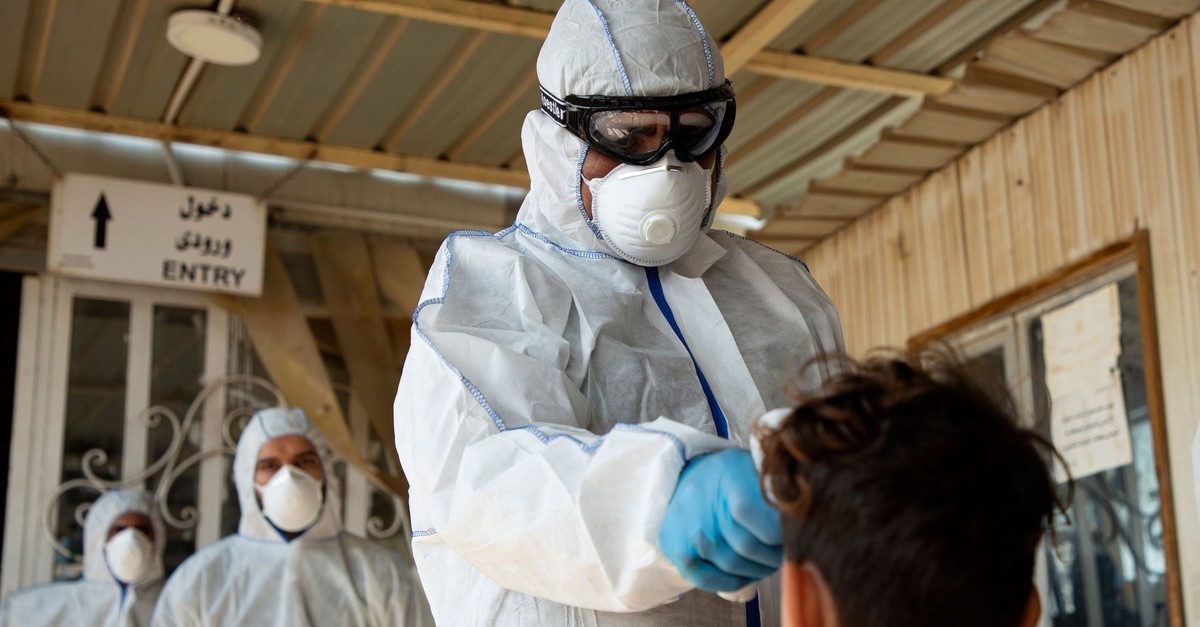 A member of a medical team takes a the temperature of an Iraqi traveller at the Shalamjah border crossing, some 15 kms southeast of the city of Basra, upon their return from Iran on February 21, 2020. (AFP Photo)
by Compiled from Wire Services Feb 22, 2020 3:48 pm

Italy reported its second death from the new coronavirus on Saturday, while a fifth Iranian patient has died. The latter has the highest death rates of any country outside the Far East.

Since it emerged in December, the virus has infected nearly 78,000 people globally, killed 2,345 in China, the epicenter of the epidemic, and 17 elsewhere in the world.

The Italian victim was a female resident in Milan's Lombardy region, ANSA said. Her reported death comes hours after a 78-year-old man died overnight near Padua, in the nearby Veneto region.

Lombardy, Italy's financial and industrial heart, is the most stricken region with 27 cases. Meanwhile, Iran's health ministry confirmed 10 new of COVID-19, bringing the total number of cases to 28.

"One of the new cases has unfortunately passed away," health ministry spokesman Kianoush Jahanpour said, noting that eight of them had been hospitalized in Qom and two in Tehran, without specifying where the death occurred.

The Iranian deaths are the first confirmed deaths from the disease in the Middle East.

Recently, clusters of infections are leading to a jump in cases of the new viral illness outside China such as Iran, South Korea, and Singapore. The experts are concerned that they can't trace where the virus clusters started.

World Health Organization officials said China's crackdown on parts of the country bought time for the rest of the world to prepare for the new virus. But as hot spots emerge around the globe, trouble finding each source – the first patient who sparks every new cluster – might signal the disease has begun spreading too widely for tried-and-true public health steps to stamp it out.

"A number of spot fires, occurring around the world is a sign that things are ticking along, and what we are going to have here is probably a pandemic," said Ian Mackay, who studies viruses at Australia's University of Queensland.

That worst-case isn't here yet, the WHO insists. It isn't convinced that countries outside China need more draconian measures, but it pointed to spikes in cases in Iran and South Korea to warn that time may be running out to contain the virus.

"What we see is a very different phase of this outbreak depending where you look," said WHO's Dr. Sylvie Briand. "We see different patterns of transmission in different places."

The World Health Organization defines a "global pandemic" as a disease spreading on two continents, though some public health experts would call an outbreak a pandemic if the spread is over a wide area or across many international borders.