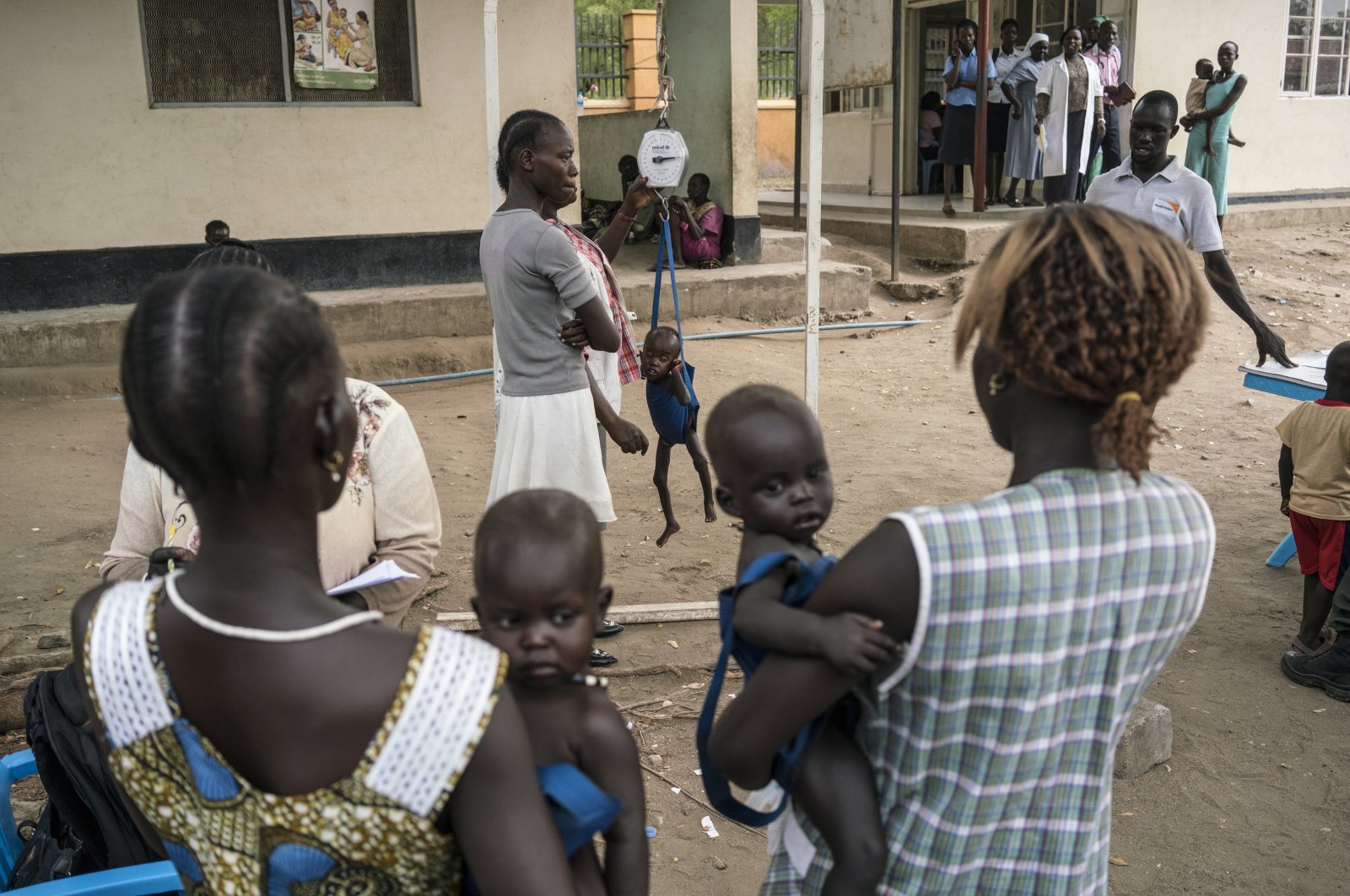 A baby suffering from severe acute malnutrition is weighed as other mothers look on with their children at Al Sabbah Children's Hospital in Juba, South Sudan, March 14, 2017. (AP Photo)
by ASSOCIATED PRESS Nov 20, 2020 11:14 am
RECOMMENDED

Twin baby boys lay on a bed of woven palm leaves in a remote camp for displaced people in Yemen’s north, their collar bones and ribs visible. They cried loudly, twisting as if in pain, not from disease but from the hunger gnawing away at them.

Here, U.N. officials’ increasingly dire warnings that a hunger crisis is growing around the world are becoming a reality.

U.N. agencies have warned that some 250 million people in 20 countries are threatened with sharply spiking malnutrition or even famine in the coming months.

But David Beasley, head of the World Food Program (WFP), says billions in new aid are needed. Without it, “we are going to have famines of biblical proportions in 2021,” he said in an Associated Press (AP) interview last week.

In multiple countries, the coronavirus pandemic has added a new burden on top of the impact of ongoing wars, pushing more people into poverty, unable to afford food. At the same time, international aid funding has fallen short, weakening a safety net that keeps people alive.

In Afghanistan’s capital Kabul, Zemaray Hakimi said he can only give his children one meal a day, usually hard, black bread dunked in tea. He lost his work as a taxi driver after contracting COVID-19 and now waits daily on the street for day laborer work that rarely comes.

When his children complain of hunger, he said, “I tell them to bear it. One day maybe we can get something better.”

South Sudan may be closer than any other country to famine, as crisis after crisis wears on a population depleted by five years of civil war. The U.N. projected earlier this year that a quarter of the population of Jonglei State, home to more than 1.2 million, would reach the brink of famine.

Now cut off from much of the world by flooding that has affected some 1 million people, many South Sudanese have seen farming and other food routines ripped apart. The challenges are so numerous that “plastic sheets are not available, as they had largely been used for the previous flood response,” the U.N. humanitarian agency said this week.

“The convergence of conflict, macroeconomic crisis, recurrent flooding as well as the indirect impacts of COVID create a ‘perfect storm,’” the country director for the CARE aid group, Rosalind Crowther, said in an email. “Flooding and violence have led to massive displacement, low crop production and loss of livelihoods and livestock.”

In the Arabian peninsula, Yemen is on a “countdown to catastrophe,” Beasley, of the WFP, warned the Security Council last week.

“Famine is truly a real and dangerous possibility and the warning lights are ... flashing red – as red can be,” he said.

For years, Yemen has been the center of the world’s worst food crisis, driven by the destructive civil war between Iranian-backed Houthi rebels who took over the north and the capital, Sanaa, in 2014 and a Saudi-led coalition backing the government in the south.

International aid pulled it from the edge of famine two years ago. But the threat has surged back this year, fueled by increasing violence and a currency collapse that put food out of reach for growing numbers of people.

Donors have been wary of new funding because of corruption and restrictions that Houthis have put on humanitarian workers. The U.N. had to cut in half the rations it gives to 9 million people – and faces possible cuts to another 6 million in January.

The 18-month-old twins, Mohammed and Ali, weigh only about 3 kilograms, or 6.6 pounds, less than a third of the weight they should be, according to their doctor.

Their father, Hassan al-Jamai, was a farmer in northern Hajjah province near the border with Saudi Arabia. Soon after their birth, the family had to flee fighting to a displaced camp in the district of Abs.

“We are struggling to treat them,” said Mariam Hassam, the twins’ grandmother. “Their father took them everywhere.”

Two-thirds of Yemen’s population of about 28 million people are hungry. In the south, U.N. data from recent surveys show that cases of severe acute malnutrition rose 15.5% this year, and at least 98,000 children under five could die of it.

By the end of the year, 41% of the south’s 8 million people are expected to have significant gaps in food consumption, up from 25%.

The situation could be worse in Sanaa and the north, home to more than 20 million people. The U.N. is currently conducting a similar survey there.

Sanaa’s main hospital, al-Sabeen, received over 180 cases of malnutrition and acute malnutrition the past three months, well over its capacities, according to Amin al-Eizari, a nurse.

At least five children died at the hospital during that period, with more dying outside, he said.

In Afghanistan – like Yemen, crippled by war – the pandemic has meant further losses of jobs and mounting food prices. The poverty rate is expected to leap this year from 54% of the population of some 36 million to as high as 72%, according to World Bank projections.

Some 700,000 Afghan workers returned from Iran and Pakistan this year, fleeing coronavirus outbreaks. That halted millions of dollars in remittances, a key income for families in Afghanistan, and returnees flooded the ranks of those needing work.

Markets in Kabul seem full of food items. But shop owners say fewer customers can afford anything. More people are experiencing major gaps in their food – expected to rise to 42% of the population by the end of the year, from 25%, according to U.N. figures.

In the Bagrami displaced camp in the mountains surrounding Kabul, Gul Makai sat beside her mud-brick hut. She had spent the night shoveling out water and mud after the roof leaked in the recent snow. With early snows this year, temperatures have dropped below freezing.

Her 12 children, all 10 or younger, sat with her, hungry and shivering in the cold breeze. They were all thin. One daughter, Neamat, around 4, had the withered look that suggests malnutrition.

Makai fled seven months ago from her home in southern Helmand province after her husband was killed in a crossfire between government forces and the Taliban. By begging, she scrounges up enough rice or hard bread to give her kids one meal a day. She eats every other day.

“The weather in winter will get colder,” she said. “If I don’t get help, my children may get sick, or God forbid I may lose any of them. We are in a bad condition.”