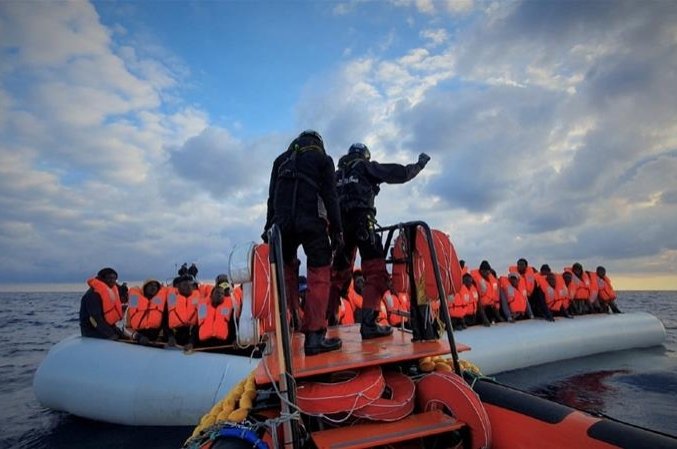 Migrants wearing life jackets on a rubber dinghy are pictured during a rescue operation, off the coast of Libya. (Reuters Photo)
by Daily Sabah with Reuters Aug 19, 2020 8:50 pm

The Mediterranean Sea continues to be a deadly route for migrants and refugees desperate to reach European shores as at least 45 people, including five children, died earlier this week in the worst shipwreck reported so far this year off Libya's coast. The latest shipwreck brings the death toll to at least 302 on the route so far this year, a United Nations agencies' statement said, though the estimated number of fatalities is likely much higher.

"Some 37 survivors, mainly from Senegal, Mali, Chad and Ghana, were rescued by local fishermen and later detained upon disembarkation," the U.N. High Commissioner for Refugees (UNHCR) and the International Organization for Migration (IOM) said in a statement disclosing Monday's incident. "They reported to IOM staff that 45 others, including five children, lost their lives when the vessel’s engine exploded off the coast of Zwara (Zuwahra)," the statement said, calling for stepping up search and rescue capacity to respond to distress calls. However, their call has so far been met with silence from the European Union countries over the ongoing tragedy of migrants near their shores.

The Mediterranean is the preferred route for migrants from Africa, mostly from Libya, who try to cross to Europe through Italy and Malta. Crossings significantly increase in the summer, with NGOs from various countries carrying out a number of rescue operations in the sea. In 2019, the IOM recorded 1,283 deaths in the Mediterranean, with the route between North Africa and Italy the deadliest. At least 19,164 migrants are estimated to have died at sea in the last five years. According to 2018 figures, six people died every day that year while attempting to reach European shores.

Amid a divided response to the Mediterranean migrant rescue crisis, EU countries, proposing only ad hoc solutions, failed to create a more permanent EU redistribution arrangement to prevent migrant tragedies at sea. So far, every standoff regarding migrants rescued from the Mediterranean takes weeks to resolve, revealing the limits of EU tolerance and its inherent deficiencies in promptly resolving dire situations. Instead, they get caught up in intra-EU struggles on what to do with migrants saved at sea while effectively dashing their European dreams.

In June 2019, eight of the 28 EU countries, including France and Germany, signaled a clear intention to move forward with a new system called a “solidarity mechanism.” However, they failed to persuade Italy and Malta to allow rescue ships to dock in their ports.

In recent months, hundreds of migrants have been stopped at sea and their vessels sent back to Libya despite the risk of violence there. With Libyan state vessels taking responsibility for rescues in the absence of an EU program, more than 7,000 people have been returned to Libya this year, the statement said. The IOM and UNHCR say Libya should not be classified as a safe port for migrants and that they should not have to disembark there. They want an alternative scheme to take people rescued or intercepted at sea to safe ports. Rights groups say those efforts have left migrants at the mercy of brutal armed groups or confined in squalid and overcrowded detention centers that lack adequate food and water.