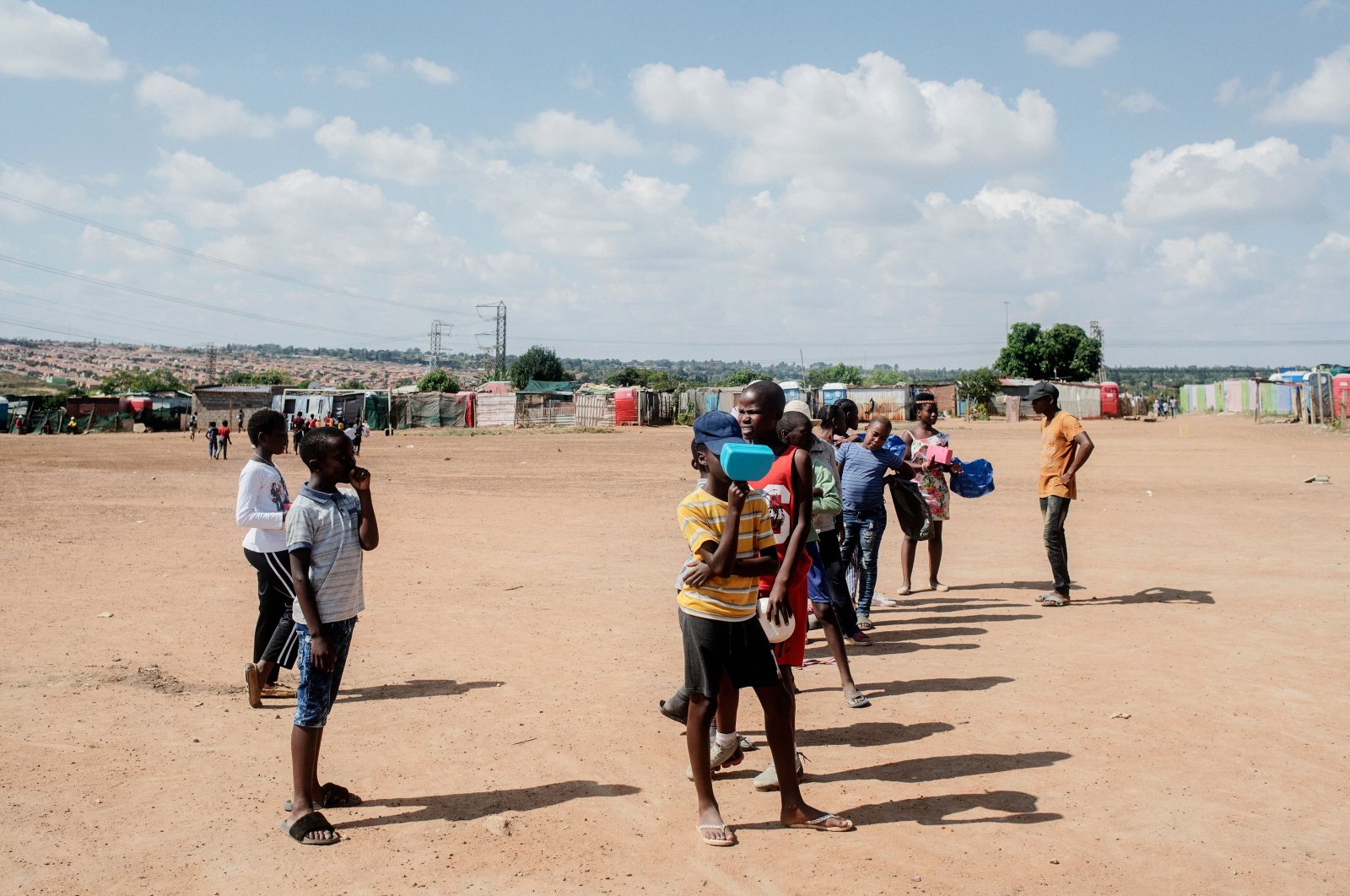 Children queue while they wait for the daily food distribution in the Tembisa informal settlement, Johannesburg on April 24, 2020. (AFP Photo)
by Agencies Apr 28, 2020 2:34 pm
RECOMMENDED

The spread of COVID-19 risks devastating countries across East Africa, where food insecurity could more than double in just three months, the United Nations warned Tuesday.

The U.N.'s World Food Programme (WFP) estimates that 20 million people currently do not have secure provisions of food across nine countries in the region: Burundi, Djibouti, Ethiopia, Eritrea, Kenya, Rwanda, Somalia and Uganda.

Compared to other parts of the world, these countries have so far registered few confirmed COVID-19 cases, with numbers still counted in the dozens or hundreds.

However, due to their often weak economies and poor health infrastructure, they are considered highly vulnerable to the impacts of the mounting crisis.

"WFP projections are currently that the number of food insecure people in the region is likely to increase to 34 (million) or up to 43 million during the next three months due to the socioeconomic impact of COVID-19," spokeswoman Elisabeth Byrs told journalists in a virtual briefing.

In the worst-case scenario, "food insecurity will have more than doubled," she stressed, adding that nearly half of the projected 43 million people affected were expected to be acutely food insecure.

She said the WFP urgently needed more than $500 million for just the next three to six months to scale up its operations in the Horn of Africa and wider East Africa.

The pandemic, which to date has killed more than 210,000 people worldwide out of more than 3 million infected, has created an "unprecedented crisis," Byrs said.

"It is not just a supply-side problem, such as drought or locusts, or a demand-side issue, such as a recession. It is both, at the same time and on a global scale," she said.

The head of WFP says he has been on the phone with leaders of some of the world’s richest nations with a critical message: The coronavirus pandemic is not only affecting your economy but is impacting the economies of vulnerable and conflict-torn countries where millions of people will face starvation if you cut the U.N. agency’s funding for food.

David Beasley said in an interview with The Associated Press (AP) he has also been telling leaders that maintaining supply chains is critical and there are many potential obstacles – export restrictions, closed borders, ports and roads, and farms not producing.

"If we have money and access we can avert famine and we can truly avert catastrophic humanitarian death from starvation,” Beasley said. "But if we lose our funding, or we lose supply chain, there’s going to be disaster.”

Beasley warned the U.N. Security Council last week that as the world deals with the COVID-19 pandemic it is "on the brink of a hunger pandemic” that could lead to "multiple famines of biblical proportions” within a few months if immediate action isn’t taken.

He said 821 million people go to bed hungry every night all over the world now, a further 135 million people are facing "crisis levels of hunger or worse,” and a new WFM analysis shows that as a result of COVID-19 an additional 130 million people "could be pushed to the brink of starvation by the end of 2020.”

WFP is providing food to nearly 100 million people on any given day, including "about 30 million people who literally depend on us to stay alive,” Beasley said. And if those 30 million people can’t be reached, "our analysis shows that 300,000 people could starve to death every single day over a three-month period” – and that doesn’t include increased starvation due to the new coronavirus.

"In a worst-case scenario, we could be looking at famine in about three dozen countries,” and in 10 of them there are already more than 1 million people per country on the verge of starvation. According to WFP, the 10 countries with the worst food crises in 2019 were Yemen, Congo, Afghanistan, Venezuela, Ethiopia, South Sudan, Syria, Sudan, Nigeria and Haiti.

In the interview following up on the Security Council briefing, Beasley said support for WFP comes from the United States, the United Kingdom, Germany, the European Union, Japan and other prosperous nations.

"If their economies deteriorate substantially, that impacts our money, it impacts the local economies in the developing nations in a variety of different ways,” he said.

He cited the examples of South Sudan – which has faced years of conflict, is 98% dependent on revenue from oil whose price has plummeted as a result of COVID-19 and where WFP feeds about 6 million people – Nigeria, where 90% of the economy is oil, and Ethiopia, which has been struggling to feed its poor and where 50% of the economy is from tourism that has vanished since the pandemic.

Beasley stressed that "We can’t say it’s hunger vs. COVID."

"We’ve got to work this together and look at the whole picture, keep the supply chain going, and minimize the economic impact so that we can make certain that people don’t starve to death,” he said. "So it’s going to be a very delicate balancing act for leaders, and I think they’re learning.”

The WFP executive director said he is asking donor nations to accelerate the $1.9 billion in funding they've already pledged in order to preposition food to protect against the effects of supply chain disruptions, commodity shortages, economic damage and lockdowns.

WFP is also seeking a further $350 million to set up a network of bigger logistics hubs, distribution points and transport systems to minimize the risk of supply chain breakdowns, he said.

But Beasley said he’s very concerned some of that money will disappear.

"That’s why I’ve been on the phone Skyping, Zooming, literally hours and hours and hours per day, and I have gotten nothing but extremely positive response from the leaders of major donor countries,” he said.

He said, however, that if leaders are told, for example, that their country will see a 25% reduction in revenue for the rest of the year, "you know that all bets are off at that point in time.”

Beasley, a former governor of South Carolina who has recovered from COVID-19, has spent the past week in Washington speaking to senior figures in the Trump administration, WFP's largest donor.

Beasley said he has also been warning leaders that economic deterioration, lack of money and a breakdown in the supply chains will lead to "destabilization and chaos in many countries around the world, which will result in significant financial implications for all regions of the world.”

Beasley said he’s also been stressing to leaders that they can’t take a short-term perspective.

He said "it’s going to be worse” in Africa because in very fragile areas people’s immune systems "are already troubled,” and children have poor nutrition and aren’t getting lunches with schools closed.

"What you see in Africa right now is nothing, nothing, compared to what you’re going to see, just like what you were looking at in the U.S. or the U.K. just six weeks ago,” he said.