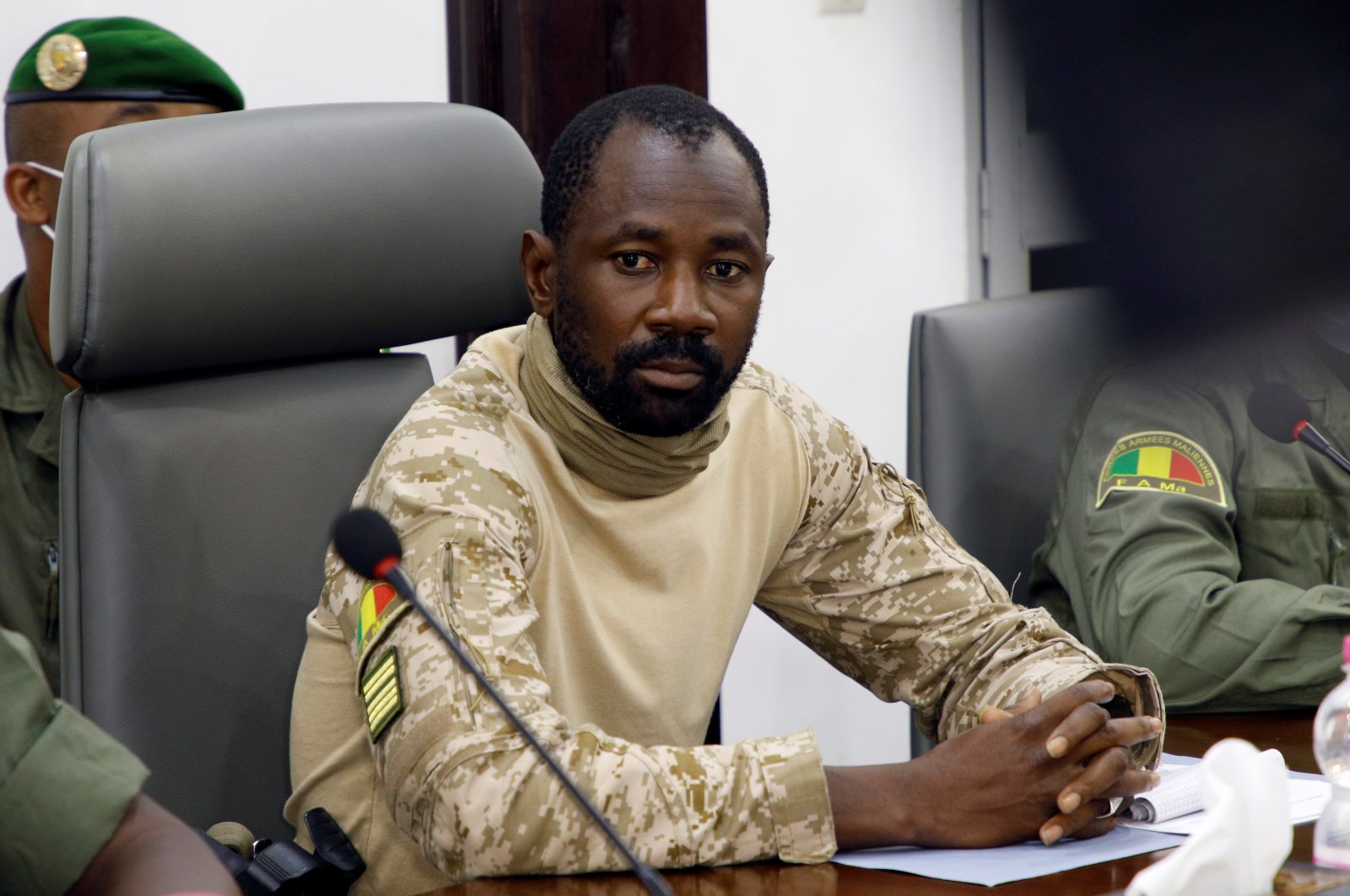 Army Col. Assimi Goita, the junta leader of the National Committee for the Salvation of the People (CNSP), attends a meeting with the Economic Community of West African States (ECOWAS) mediators in Bamako, Mali, Aug. 22, 2020. (Reuters Photo)
by Agencies Aug 27, 2020 4:24 pm
RECOMMENDED

A group of military officers, who call themselves the National Committee for the Salvation of the People (CNSP), has controlled the West African nation since Aug. 18, when the mutineers detained Keita at gunpoint and forced him to resign.

Keita's release is one of the demands of Mali's international partners, including West Africa's regional bloc, the 15-nation Economic Community of West African States (ECOWAS), which sent a delegation to Bamako over the weekend to negotiate with coup leaders.

Keita "was freed this morning, (and) he has returned to his home," a spokesperson for the junta, Djibrilla Maiga, said, without giving further details.

The former president's whereabouts could not immediately be confirmed. His residence in Bamako appeared deserted at midday with no sign of the usual security presence outside, a local resident said, asking not to be named.

The junta leaders say they mutinied because the country was sinking into chaos and insecurity that they said was largely the fault of poor government. They have promised to oversee a transition to elections within a "reasonable" amount of time.

ECOWAS's leaders have demanded that Mali's ruling military junta put in place an interim government, headed by a civilian or a retired military officer, that would last no longer than one year before democratic elections are held to restore the country to civilian rule. That demand was conveyed by a special envoy, former Nigerian President Goodluck Jonathan during negotiations in Mali this week with the junta.

"The Interim Government would then organize elections to restore full constitutional order," Jonathan told Nigeria’s current President Muhammadu Buhari during a briefing on the negotiations that were suspended Monday, according to a statement from his office.

The briefing by Jonathan comes before an extraordinary virtual summit to be held Friday by ECOWAS to discuss the situation in Mali.

CNSP has proposed staying in power for three years until Mali's next election until 2023. The junta’s proposed time frame is more than double the time it took to hold a vote after a similar coup in 2012 and would allow the soldiers who overthrew a democratically elected president to remain in power all that time.

African countries and the wider international community have expressed fears that Mali's upheaval could allow extremists in the country to extend their reach. Mali has been fighting extremists, with heavy international support, for more than seven years.

"About two-thirds of Mali is occupied by terrorists and it makes common sense to secure the country, rather than pursuing individual interests," Buhari said in the statement issued by his office. West Africa will reach a common position on Mali Friday, he added.

The ECOWAS delegation to Mali suspended their mediation talks with the military junta Monday after failing to reach an agreement on who will lead the volatile country and how long the transition back to democracy would take.

Following the coup, ECOWAS leaders said they were considering mobilizing a standby military force to restore civilian rule, but that prospect has become unlikely after thousands of Malians took to the streets of the capital last week to support the junta. The regional group also shut borders, halted financial flows to Mali and threatened further sanctions.

The leaders of the junta are also asking the West African bloc to lift sanctions already in place, according to Jonathan, who said "we told them that the authority to do such was only in the hands of ECOWAS heads of state."

The ECOWAS demand for an interim government comes amid mounting international pressure on the junta.