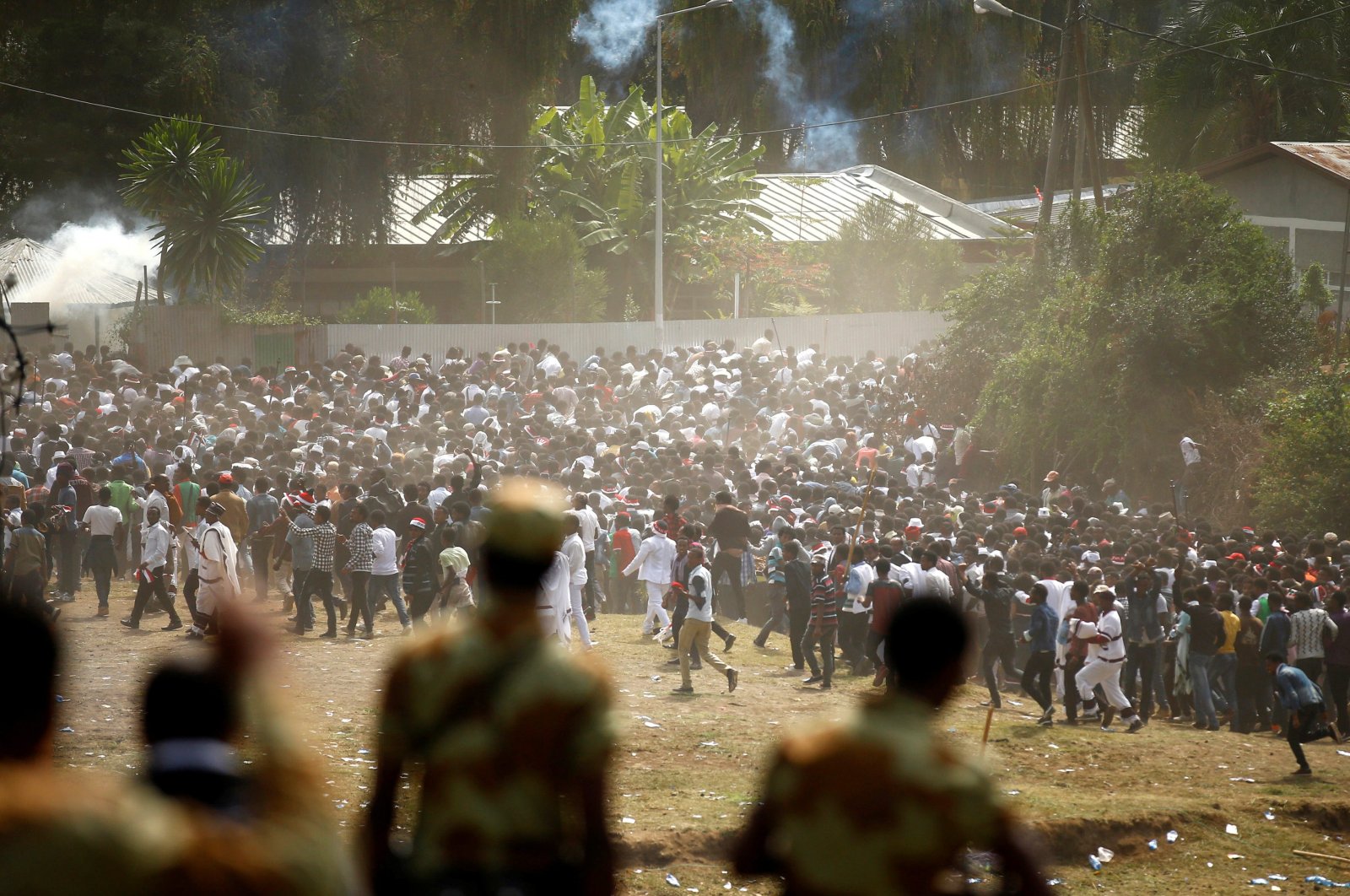 Protestors run from teargas launched by security personnel during the Irecha, the thanksgiving festival of the Oromo people, Bishoftu, Oromia region, Ethiopia, Oct. 2, 2016. (Reuters Photo)
by French Press Agency - AFP May 29, 2020 11:52 am
RECOMMENDED

Ethiopian soldiers and police officers allegedly carried out dozens of extrajudicial executions last year in a crackdown on a rebel group active in the country's restive Oromia region, Amnesty International said in a report Friday.

The alleged killings – 39 in total – are part of a pattern of abuses that also include torture and mass arbitrary arrests, with detainees subjected to "political rehabilitation training" promoting Prime Minister Abiy Ahmed's government, the report said.

They risk aggravating political tensions ahead of general elections that were scheduled for August but have been delayed because of the coronavirus pandemic, Fisseha said.

"What is really happening is beyond a normal law enforcement mandate," he said. "They are going after people who are perceived to be supporters of the opposition as well as the families of militants."

A relative of one slain man described hearing the gunshot that likely killed him but told Amnesty, "I couldn't go and check since there was a curfew."

"The next morning, we found his body near the military camp," the relative said. "His body had clear marks of physical abuse, as his hands and leg were broken."

The crackdown in Oromia is ostensibly targeting the Oromo Liberation Army (OLA), blamed for a spate of assassinations, bombings, bank robberies and kidnappings in Oromia.

The OLA, believed to number in the low thousands, broke off from the Oromo Liberation Front (OLF), an opposition party that spent years in exile but was allowed to return to Ethiopia after Abiy took office in 2018.

In February AFP reported on how the campaign against the OLA was playing out in an area of western Ethiopia known as Wollega, also in Oromia.

Residents there told of extrajudicial killings and mass arrests unfolding amid a monthslong internet blackout that was only lifted after Ethiopia recorded its first case of COVID-19 in mid-March.

Amnesty's report also claims security forces' "complicity" in intercommunal violence in the northern Amhara region, either through active involvement or a failure to intervene to protect vulnerable communities there.

When contacted by AFP, Abiy's office referred questions to Ethiopia's Ministry of Peace, which did not immediately respond to a request for comment.

Amnesty notes in its report that various ministries and government bodies did not respond to multiple requests for comment on its findings in Oromia.

An official in Amhara rejected Amnesty's findings and claimed that security forces' responses in that region limited the number of casualties, the report said.