'Our children die in our hands': Floods ravage South Sudan 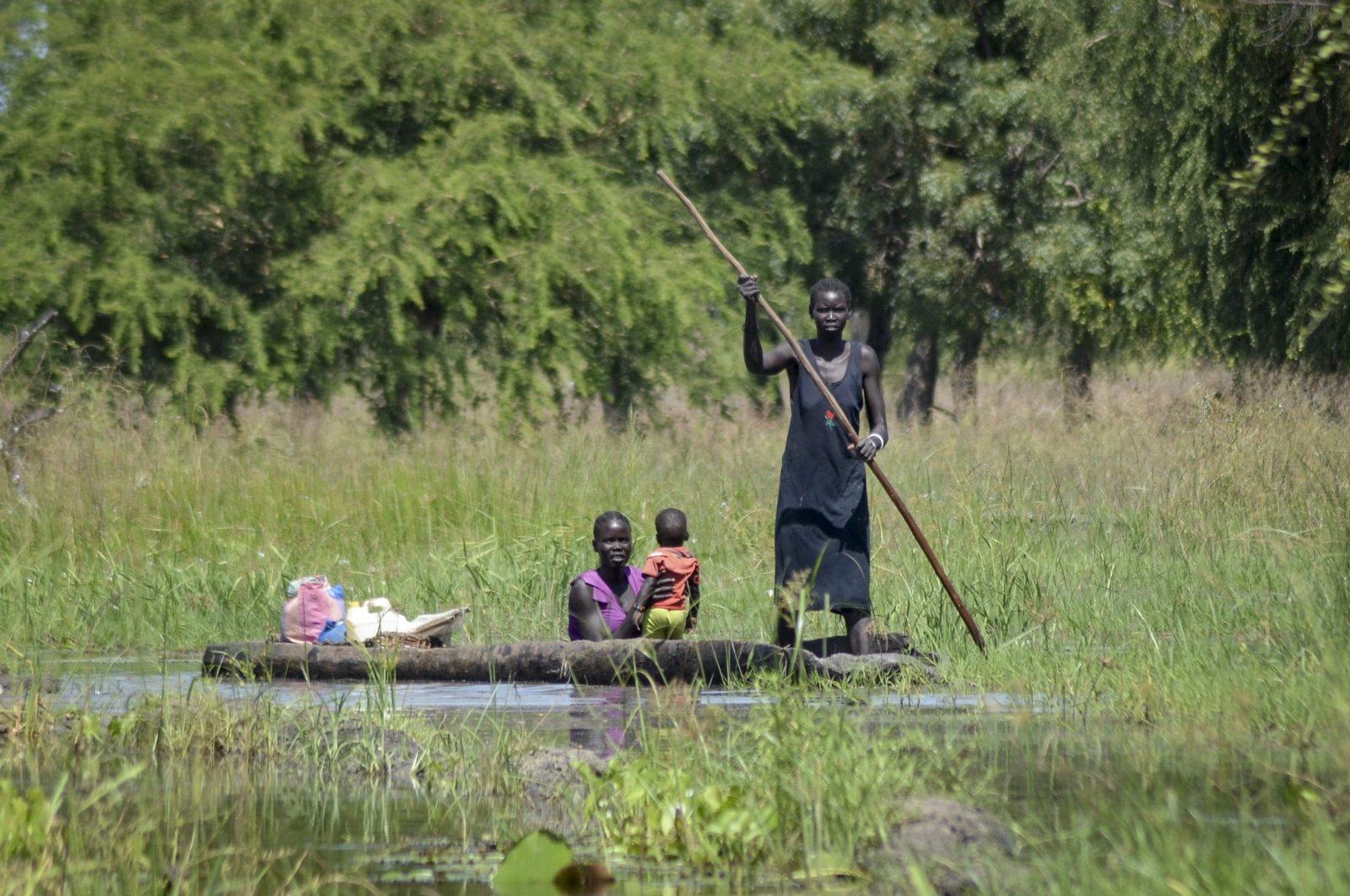 A mother holds her baby as she is transported by dugout canoe through floodwaters in the village of Wang Chot, Old Fangak county, Jonglei state, South Sudan, Nov. 26, 2020. (AP Photo)
by ASSOCIATED PRESS Jan 01, 2021 12:11 pm
RECOMMENDED

On a scrap of land surrounded by flooding in South Sudan, families drink and bathe from the waters that swept away latrines and continue to rise.

Some 1 million people in the country have been displaced or isolated for months by the worst flooding in memory, with the intense rainy season a sign of climate change. The waters began rising in June, washing away crops, swamping roads and worsening hunger and disease in the young nation struggling to recover from civil war. Now famine is a threat.

On a recent visit by The Associated Press (AP) to the Old Fangak area in hard-hit Jonglei state, parents spoke of walking for hours in chest-deep water to find food and health care as malaria and diarrheal diseases spread.

Regina Nyakol Piny, a mother of nine, now lives in a primary school in the village of Wangchot after their home was swamped. "We don’t have food here, we rely only on United Nations humanitarian agencies or by collecting firewood and selling it,” she said. "My children get sick because of the floodwaters, and there is no medical service in this place.” She said she eagerly waits for peace to return to the country, with the belief that medical services will follow "that will be even enough for us.”

One of her nieces, Nyankun Dhoal, delivered her seventh child into a world of water in November. "I feel very tired and my body feels really weak,” she said. One of her breasts was swollen, and her baby had rashes. She wishes for food, and for plastic sheeting so that she and her family can stay dry.

The mud sucks at people’s feet as they engage in the daily struggles to hold back the waters and find something to eat.

Nyaduoth Kun, a mother of five, said the floods destroyed her family’s crops and life has been a struggle for months, with people selling their prized cattle to buy food that’s never enough. The family eats just two meals a day and the adults often go to bed on empty stomachs, she said. She has begun collecting water lilies and wild fruits for food. She said she had little knowledge of the coronavirus pandemic ravaging other parts of the world and spreading largely undetected in poorly resourced South Sudan.

"There are many diseases living among us, so we can’t figure out if it’s coronavirus or not," she said. Instead, her fear is that the makeshift water dike around their home could collapse at any time, flooding the young children.

The chief of Wangchot village, James Diang, made the decision early during the flooding to send badly affected children to the town center after several drowned "and everything was being destroyed rapidly.” Now cattle are dying, he said, and survivors have been transported to drier areas. The remaining residents are eating tree leaves and sometimes fish to survive, he said. Fevers and joint pain are widespread. When there is no canoe to transport people during times that waters surge, "our children die in our hands because we are helpless,” he said. He hopes, like everyone, for sustainable peace, and for an improved dike so the community can have enough dry ground for planting.

The people of South Sudan put their trust in President Salva Kiir and former armed opposition leader Riek Machar to lead during this transition period, "but now they are failing us,” said the government's acting deputy director in the area, Kueth Gach Monydhot. "We don’t have hope, we lost confidence in them.”

The situation in Fangak county remains volatile, with almost all of its more than 60 villages affected by the flooding and "no response from the government,” he said. "Do you think they will plan for other people when they have failed to implement the peace agreement?"

At the clinic in Old Fangak run by the medical charity Doctors Without Borders, Nyalual Chol said the dike she tried to build against the floodwaters collapsed, and her home quickly collapsed, too. She had been alone at home with her four children. As with many families, her husband was away on duty in another part of the country as a soldier. She reached the clinic by canoe after an hour of travel, seeking help for her sick child. There, she also received a ration of food.

The Doctors Without Borders project coordinator in Old Fangak, Dorothy I. Esonwune, recalled the sight of newly displaced people sheltering under trees without mats, blankets or mosquito nets.

Meanwhile, the charity’s mobile clinics were suspended because of the COVID-19 pandemic, further complicating efforts to reach sick people stranded by the flooding. "The water continues to rise and the dikes continue to break and there are people still displaced, yet they don’t have the main necessities,” she said, describing several people often crammed into a single shelter.

Now the international community has rung the alarm about likely famine in another flood-hit part of Jonglei state. The U.N. Food and Agriculture Organization representative in South Sudan, Meshak Malo, has appealed to the parties that signed the country’s peace accord to cease violence and ensure safe humanitarian access to prevent the dire situation from turning into a full-blown catastrophe.

The new report of likely famine is an eye-opener and a signal to the government, which has not endorsed its findings, said the chairperson of the National Bureau of Statistics, Isaiah Chol Aruai. "There is no way that the government would ignore or downplay an emergency when it’s really found out to be an emergency,” he said.