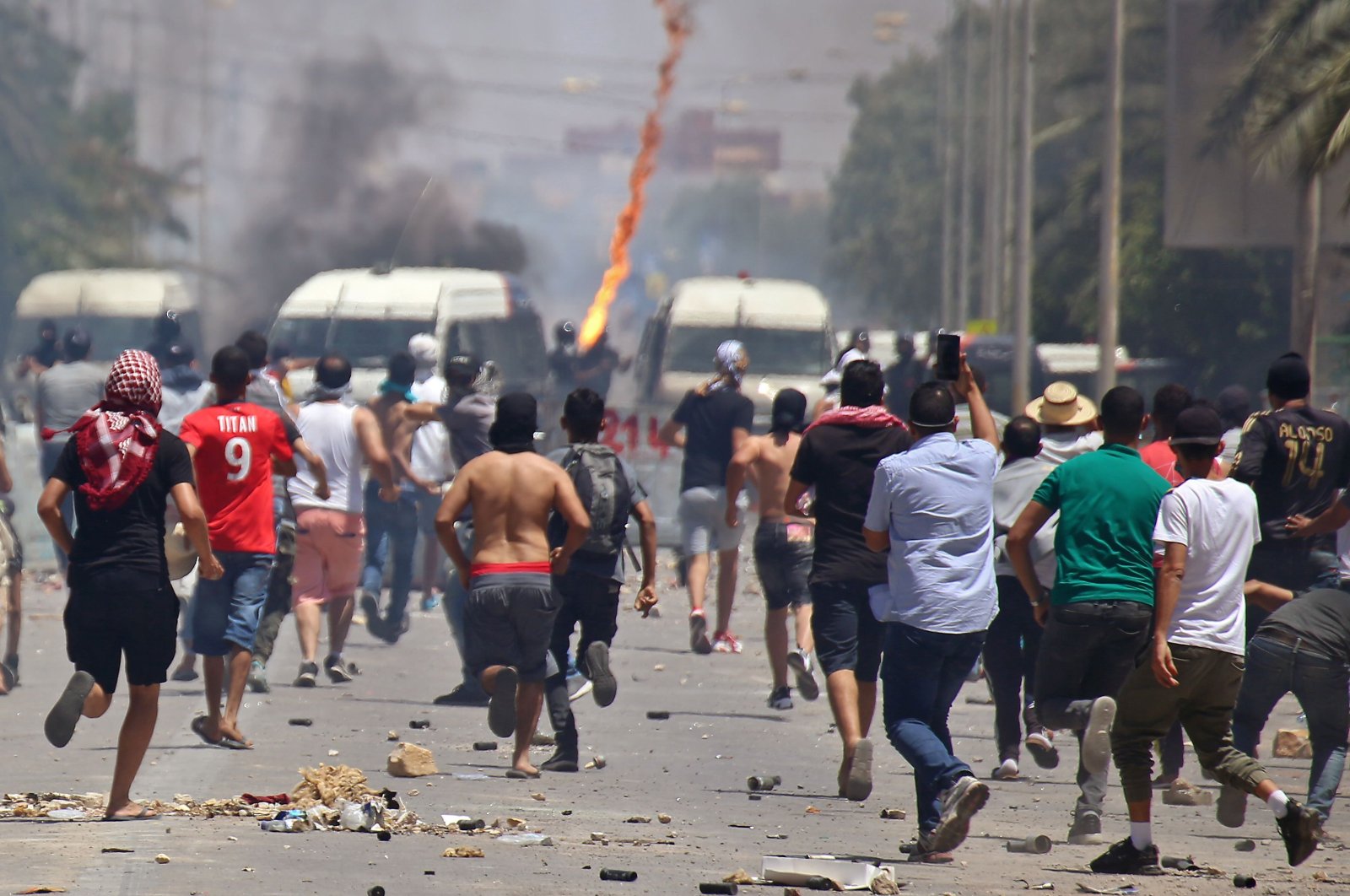 Tunisian protesters clash with security forces as they demand authorities make good on a 2017 promise to provide jobs in the gas and oil sector to thousands of unemployed, in the southern city of Tataouine, Tunisia, June 22, 2020. (AFP Photo)
by Agencies Jun 22, 2020 4:28 pm
RECOMMENDED

Protesters demanding jobs and the release of an activist in Tunisia's marginalized south clashed Monday with security forces for a second straight day.

Protesters are calling on the government to implement a 2017 deal to create jobs in oil companies and infrastructure projects to reduce unemployment now running at 30% in the region, one of the highest rates in Tunisia.

For weeks they have blocked roads around the remote El-Kamour pumping station to prevent tanker trucks from entering the facility, but the protest had been largely peaceful.

On Sunday, protesters in Tataouine city burned tires and pelted security forces with stones to demand jobs and the release of activist Tarek Haddad, who was arrested the previous day, as security forces responded with tear gas.

"The situation is dangerous in our area. From the window of my home I see police forces randomly launching (tear) gas and chasing young men," Ismail Smida, a resident, told Reuters.

Another witness said police skirmished with hundreds of demonstrators throwing stones, blocking roads and chanting, "We will not give up, we want our right to development and jobs."

Haddad is a key figure in the protest movement.

The governor of Tataouine, Adel Werghi, said Haddad was "wanted" by the authorities, without providing further details.

The interior ministry said 10 people were arrested Sunday after a group of protesters tried to attack police stations with Molotov cocktails.

Denouncing an "excessive and unjustified" use of force against protesters, the powerful Tunisian trade union confederation UGTT had called for a general strike in Tataouine.

Shops were open Monday but public services and state institutions remained closed in adherence to the strike, AFP correspondents said.

The sit-in ended after the employment minister signed a deal with representatives of the protesters, brokered by the UGTT, pledging to invest 80 million Tunisian dinars a year (almost $28 million) in Tataouine.

The UGTT branch in Tataouine said the promise was never kept.

The protests come as Tunisia, until now largely spared the worst of the coronavirus, faces tensions within its coalition government and the impact of restrictions imposed to combat the spread of the pandemic that have deepened inequalities.