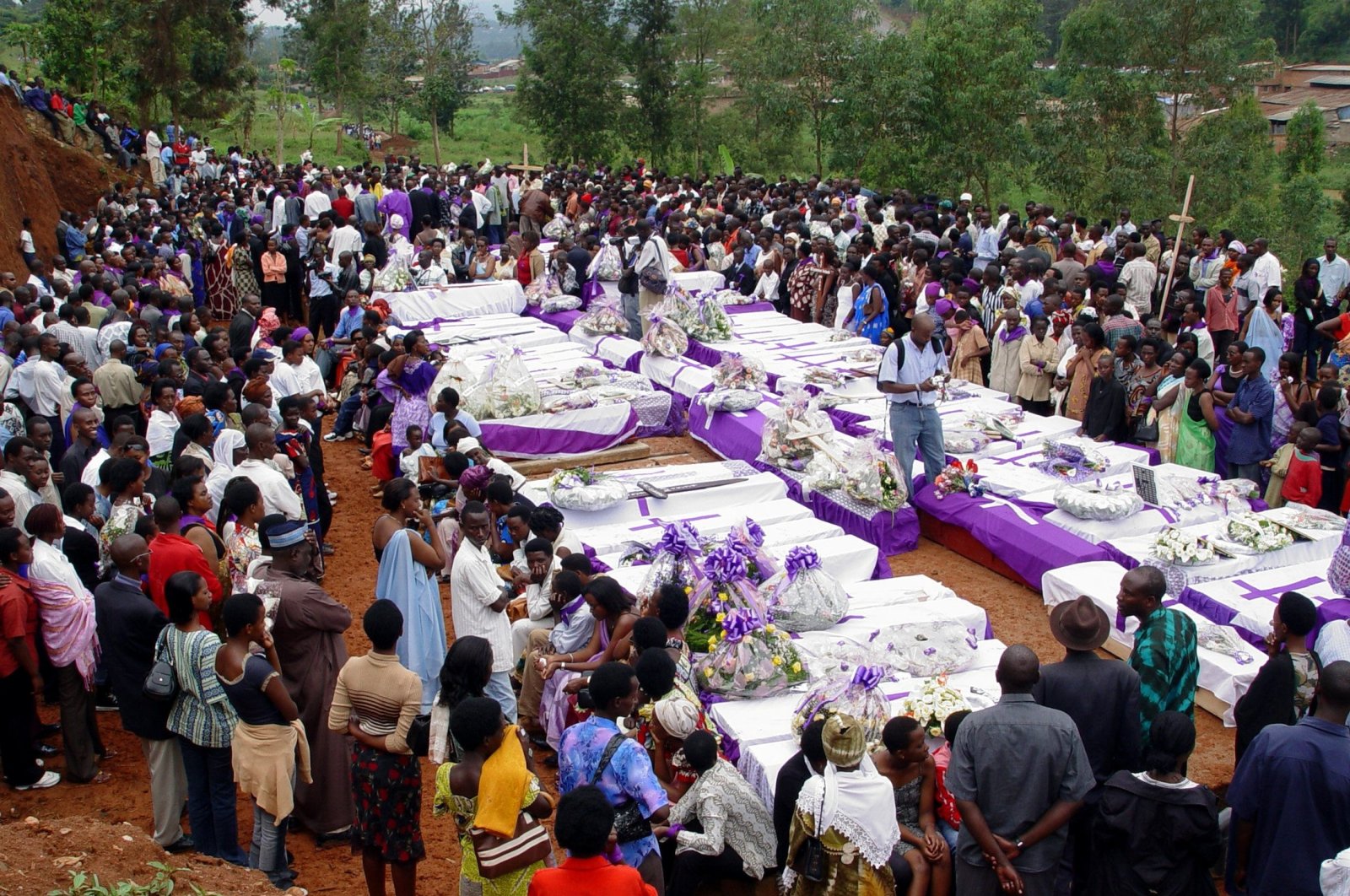 People pay their respects in front of dozens of coffins containing remains of more than 600 victims of the 1994 genocide, to be buried in mass graves during commemorations in the capital Kigali, Rwanda, April 7, 2006. (Reuters Photo)
by Anadolu Agency
Aug 01, 2021 2:06 pm

Jean Damascene Ngoboka, a Rwanda genocide perpetrator, said he was not at peace for many years because he was haunted by his crimes committed during the 1994 genocide against the Tutsi ethnic group.

"I was experiencing nightmares. I lost sleep reflecting on my crimes committed during the genocide. It could scare me,” said Ngoboka. Not anymore, Ngoboka, 45, now gets sound sleep and moves freely around Bumbogo in Kigali’s Gasabo district, where he participated in massacres of the Tutsi ethnic community.

In the aftermath of the genocide, the Rwandan government fostered efforts to reconcile Rwandans, but Ngoboka said as a perpetrator he had a very heavy heart and worried that survivors nursed a grudge against him. Ngoboka has fresh memories of when, in 1994, a vehicle with armed police officers arrived in his area in Gasabo district purportedly hunting for Rwanda Patriotic Army (RPA) soldiers, the liberation war fighters that stopped the genocide.

The police commander ordered all youths in the area to join after ordering all drinking joints shut. Ngoboka, who was around 17 then, recalled that several youths picked up machetes and clubs and alongside armed officers, raided the home of an elderly woman identified only as Leocardia who was accused of harboring RPA soldiers. Leocardia was instantly killed even when no rebel trace was found in her home, readying residents to brace for more killings, he said.

For him, the first attack confirmed the intention of extremists to eliminate members of the Tutsi ethnic group. In the meantime, the search for rebels and members of the Tutsi ethnic group continued in surrounding areas, he said. In the ensuing days, RPA fighters launched an attack that scattered extremists and rescued some Tutsi targets in the area.

Fearing arrest after the genocide in July 1994, Ngoboka relocated to another area in Kigali, where he stayed until 1996 when he returned to his home in Gasabo. But in the village, anxiety and fears lingered about probable revenge by relatives of those he had played a role in killing. That is when he conceived the idea of surrendering to authorities.

He was arrested and incarcerated at the Gikondo prison in Kigali for seven years. While in prison, it was around the same time that the government designed traditional courts called Gacaca to try genocide cases. Inmates were sensitized on the need to confess to crimes to facilitate the work of the traditional courts. Ngoboka agreed to confess before Gacaca judges and was sentenced to six years in jail after conviction. Since he had already been in prison for seven years, he was released. After being released, he spent time reminiscing on what happened. He gathered the courage to approach survivors to seek forgiveness.

Sheepishly, he would greet survivors to gauge their reactions when they met in community activities and the trading center.

"I couldn’t imagine what genocide survivors were thinking about me. I was afraid of meeting them. I was aware they knew very well how we killed their loved ones,” he said. But as the days passed, Ngoboka mustered the courage to visit the home of one survivor, Donald Kamali, whose mother he had participated in killing. He asked Kamali for forgiveness. And it was granted. He now interacts freely with survivors, living above ethnic divisions that manifested during the genocide. He said he regrets he was involved in the massacres, finding a very interesting parallel with the divisions in the lead-up to the genocide.

"The situation has changed. In the immediate aftermath of the genocide and after my release from prison, I could not meet face-to-face with survivors in the village,” he said. "But today we interact at social functions. It wasn’t like that.” Ngoboka and Kamali are members of an NGO called Mvura Nkuvure, which brings together genocide perpetrators and survivors in Gasabo – promoting unity and reconciliation in the district.

Through the organization, some survivors accept to forfeit compensation from perpetrators for their property looted or destroyed in the genocide. Large numbers of perpetrators are members of the same community associations, where they meet regularly to discuss issues, he said. In one instance, some perpetrators in the district who received forgiveness from survivors said they are often the first to arrive when invited by a survivor to a social function.

Seated on the ground at his home in the Bumbogo area, a few kilometers from Rwanda’s capital Kigali, Kamali described how he fled his home in 1994 because of the extremist massacres. If it was not for the arrival of the Rwanda Patriotic Army fighters, he would rather die than keep hiding, he said. It took him some time to recover. He said while he can't erase what happened from his memory, he accepted to move along with perpetrators for the sake of unity and reconciliation. Kamali, 64, said Ngoboka’s move to ask for forgiveness was the right thing to do in line with the country’s reconciliation process.

"Even when Ngoboka participated in the killing of my mother, I forgave him after he genuinely showed remorse and confessed to the killing. I have forgiven him and many others, including those who looted my property,” Kamali told Anadolu Agency (AA).

"We are now one people,” said the Ngoboka, citing a text message he received from a survivor inviting him to a get-together. During the genocide, Kamali was married to a Hutu wife with four children.

They separated for a month as they fled in separate directions. Kamali and his children were targeted for killing by extremists. He attributed his survival to God’s grace. He hid in bushes for days until he was rescued when RPA soldiers arrived in the Gasabo district.

"Nursing a grudge would not lead us to reconciliation yet it could not resurrect my dead. Though not easy, we have embraced reconciliation with genocide perpetrators,” he said.

The genocide against the Tutsi began April 7, 1994, and claimed more than 1 million lives, mainly Tutsi and moderate Hutus.