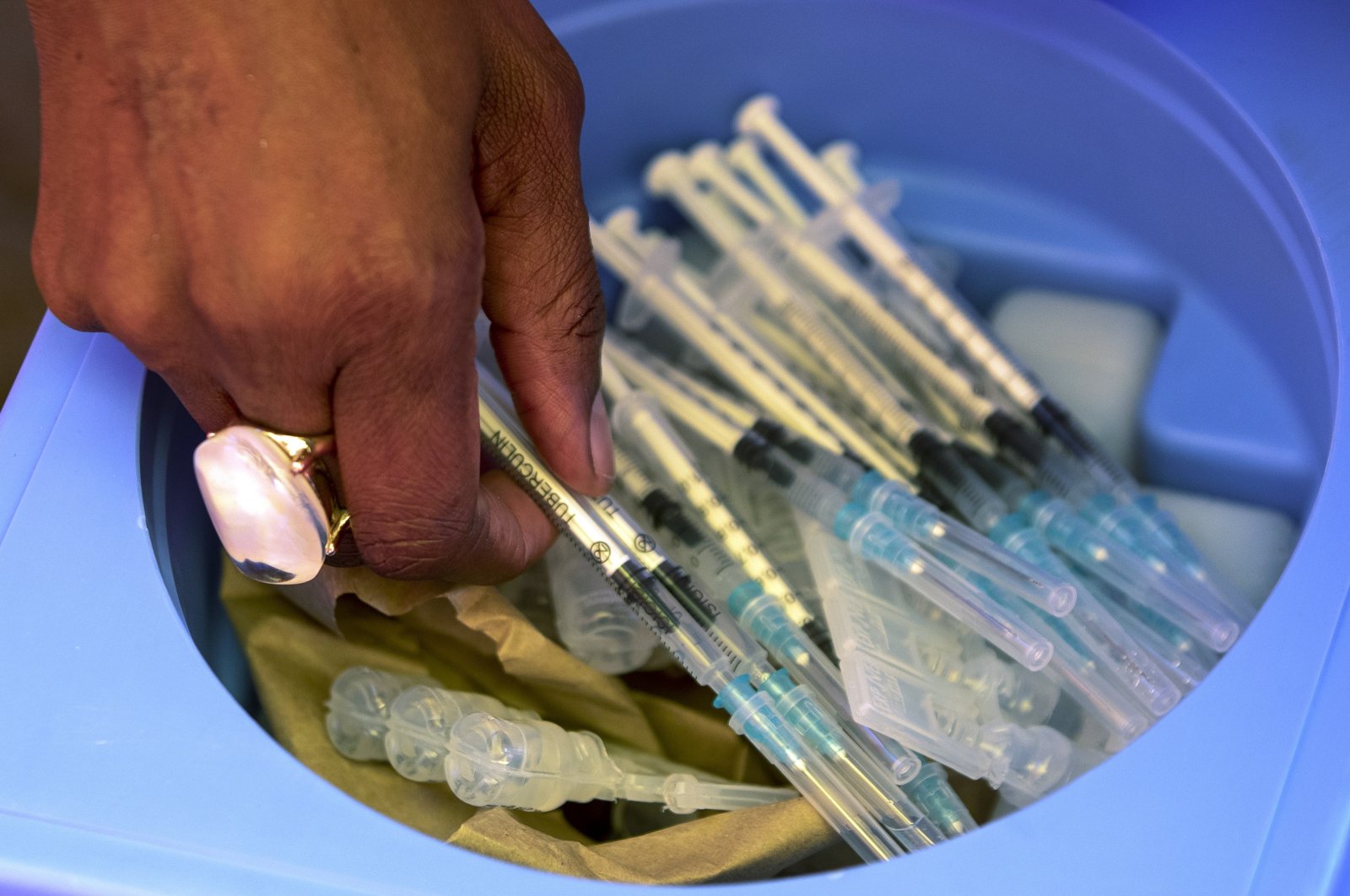 A health worker picks syringes as seniors get vaccinated with the first dose of the Pfizer coronavirus vaccine at the newly opened mass vaccination program for the elderly at a drive-through vaccination center in Johannesburg, South Africa, May 25, 2021. (AP Photo)
by Associated Press Oct 28, 2021 10:29 pm
RECOMMENDED

The world is faced with a severe shortage of syringes that threatens, in particular, to further damage Africa's struggle to inoculate people against COVID-19, the World Health Organization (WHO) said Thursday as African health officials and the United Nations warned of an "imminent shortfall" of up to 2.2 billion single-use syringes used to give jabs.

The U.N. children's agency, UNICEF, said the shortfall would affect up to 2.2 billion auto-disposable syringes that lock automatically to prevent them from being used again. "We are not anticipating a significant supply shortage of the more standard syringes used in high-income countries," the agency said in a statement. It blamed "significantly higher demand," supply chain disruptions, national bans on syringe exports and an unpredictable supply of vaccines.

The threatened shortage comes as the flow of COVID-19 vaccine doses increases after months of delays to the African continent, the world's least protected region with less than 6% of its population of 1.3 billion people fully vaccinated. Just five of Africa's 54 countries are expected to reach the target of fully vaccinating 40% of their populations by year's end.

"The scarcity of syringes could paralyze progress," the World Health Organization's Africa director, Matshidiso Moeti, told reporters on Thursday. Already, some African countries including South Africa, Kenya and Rwanda have seen delays in receiving syringes, the WHO said.

Routine childhood vaccinations "are going to be impacted," said Sibusiso Hlatjwako of the health organization PATH, which forecasts that the problem could persist "way into 2022." PATH looked at data from manufacturers and said more than 100 countries around the world use the auto-disposable syringes affected.

Overall, the modeling "shows a sizeable gap now," he said.

The syringe shortage is already complicating COVID-19 vaccination efforts in Rwanda, which has been receiving COVID-19 vaccines with a "very short shelf life" of sometimes a month or two before expiration dates, Sabin Nsanzimana with the Rwanda Biomedical Center told reporters.

"You have to get these syringes in a short timeline," he said, "otherwise you have vaccines expiring in your hands."

Health officials said another complication is that the Pfizer vaccine for COVID-19, used widely across Africa, requires a new and different syringe. There is no global stockpile for the new auto-disposable syringe, and the market for them is "tight and extremely competitive," the WHO said.

The African continent has few syringe manufacturers and none that make the Pfizer one, the WHO said.

COVID-19 vaccine donations to African countries are now surpassing syringe availability, and countries in some cases are having to source syringes separately, WHO vaccination official Phionah Atuhebwe told reporters. "Without a plan, we should be in big trouble."

African health officials say the African continent is seeing a downward trend in new COVID-19 cases and deaths over the past month, but Moeti warned that another increase could come around the approaching holiday season.

The African continent has had more than 8.4 million confirmed cases of COVID-19, including more than 218,000 deaths.