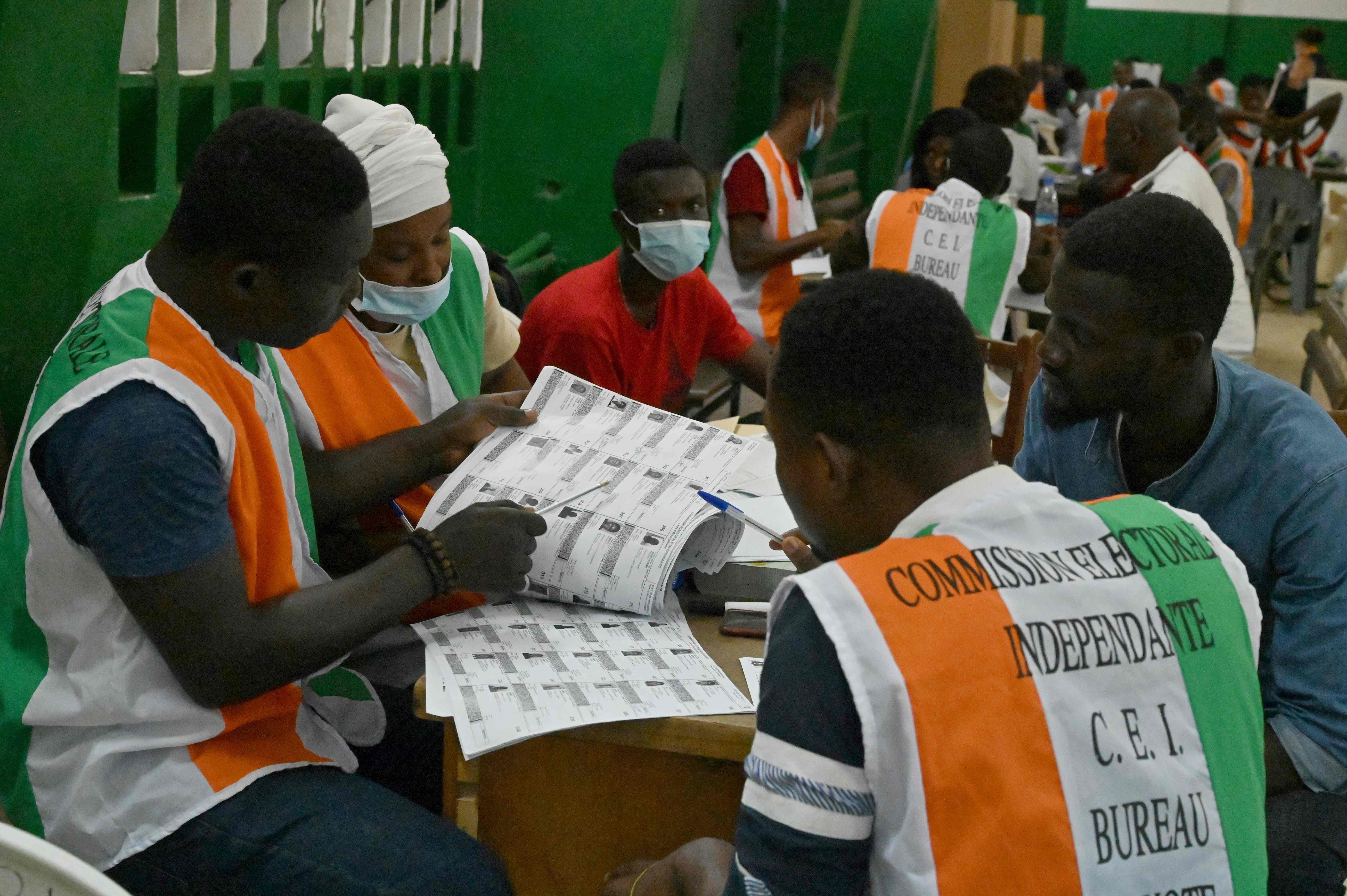 The election has revived painful memories of the West African nation's crisis nearly a decade earlier that left more than 3,000 people dead before the country's then-president was forced to concede defeat. Many fear those old political rivalries could be reignited.

More than 20 people were killed ahead of Saturday’s vote, prompting the United Nations and human rights groups to call for calm.

Top opposition candidates Pascal Affi N’Guessan and Henri Konan Bedie had urged their supporters to stay home after first trying unsuccessfully to have Ouattara's candidacy thrown out, citing constitutional term limits. The president maintains the two-term limit does not apply to him because a new constitution was approved in a 2016 referendum.

The opposition parties gave few details about the alleged deaths Saturday. They said the boycott and call for civil disobedience had succeeded in thwarting the vote.

"Ivorians refused to associate themselves with this farce of an action,” N’Guessan said, describing Abidjan as "a deserted city.”

Opposition activists put up barricades in many localities, and voting materials were seized from depots and burned, he said, without offering specifics.

Ibrahime Coulibaly-Kuibiert, president of the Independent Electoral Commission, told reporters there had been a few "minor disturbances.”

"There are barely 30 to 40 polling stations that were ransacked," out of more than 22,000 nationwide, he said.

Ouattara called on Ivorians to halt acts of violence aimed at disrupting the vote as he cast his ballot earlier in the day in Abidjan's Cocody neighborhood.

"I appeal to those who launched this slogan of civil disobedience that led to the death of a man," he said, giving no details. "Let them stop, let them stop because Ivory Coast needs peace.”

While election observers outnumbered voters at some polling stations, crowds gathered early in the Abobo neighborhood, an Ouattara stronghold.

"All Ivorians who want peace should vote today,” said Mamery Doumbia, standing outside a voting center. "My greatest wish is that the country finds peace again following the election because I am afraid for what will happen after the vote.”

The 2010 presidential election brought months of violence after then-President Laurent Gbagbo refused to concede defeat to Ouattara, the internationally recognized winner. Ouattara ultimately prevailed, but only after pro-Ouattara forces captured Gbagbo and forced him from his underground bunker.

Gbagbo was later acquitted of crimes against humanity at the International Criminal Court (ICC), but many fear that anger over Ouattara's bid for a third term could reignite simmering hostilities. Critics say the Ouattara administration has disproportionately pursued justice for crimes committed by Gbagbo loyalists, undermining national reconciliation efforts.

Opposition candidates N’Guessan and Bedie remained on the ballot. There was just one other candidate, Konan Bertin Kouadio, who broke away from his longtime party earlier this year to run as an independent when it chose Bedie instead as its standard-bearer. Kouadio received less than 4% of the vote in the 2015 election.

The 78-year-old Ouattara, who has broad international support and was re-elected five years ago with nearly 84% of the vote, initially said he would not seek a third term. He backtracked after his chosen successor died from a heart problem in July.

Critics say Ouattara has essentially shaped the race to his favor, stacking the electoral bodies with his supporters to ensure any legal appeals fail. Forty of the 44 people who applied to run had their candidacy rejected, including two prominent politicians in exile.

Guillaume Soro, a former prime minister and president of the National Assembly, remains in France after his return to Ivory Coast was thwarted by criminal charges his followers say were politically motivated. Gbagbo, the former president, is living in Belgium while ICC prosecutors appeal his acquittal. He was struck from the electoral list and refused a passport.

In an interview this week with French media, Ouattara insisted that he was motivated to run again by his love of country. "It’s a sacrifice I’m making,” he told France 24 and Radio France Internationale.