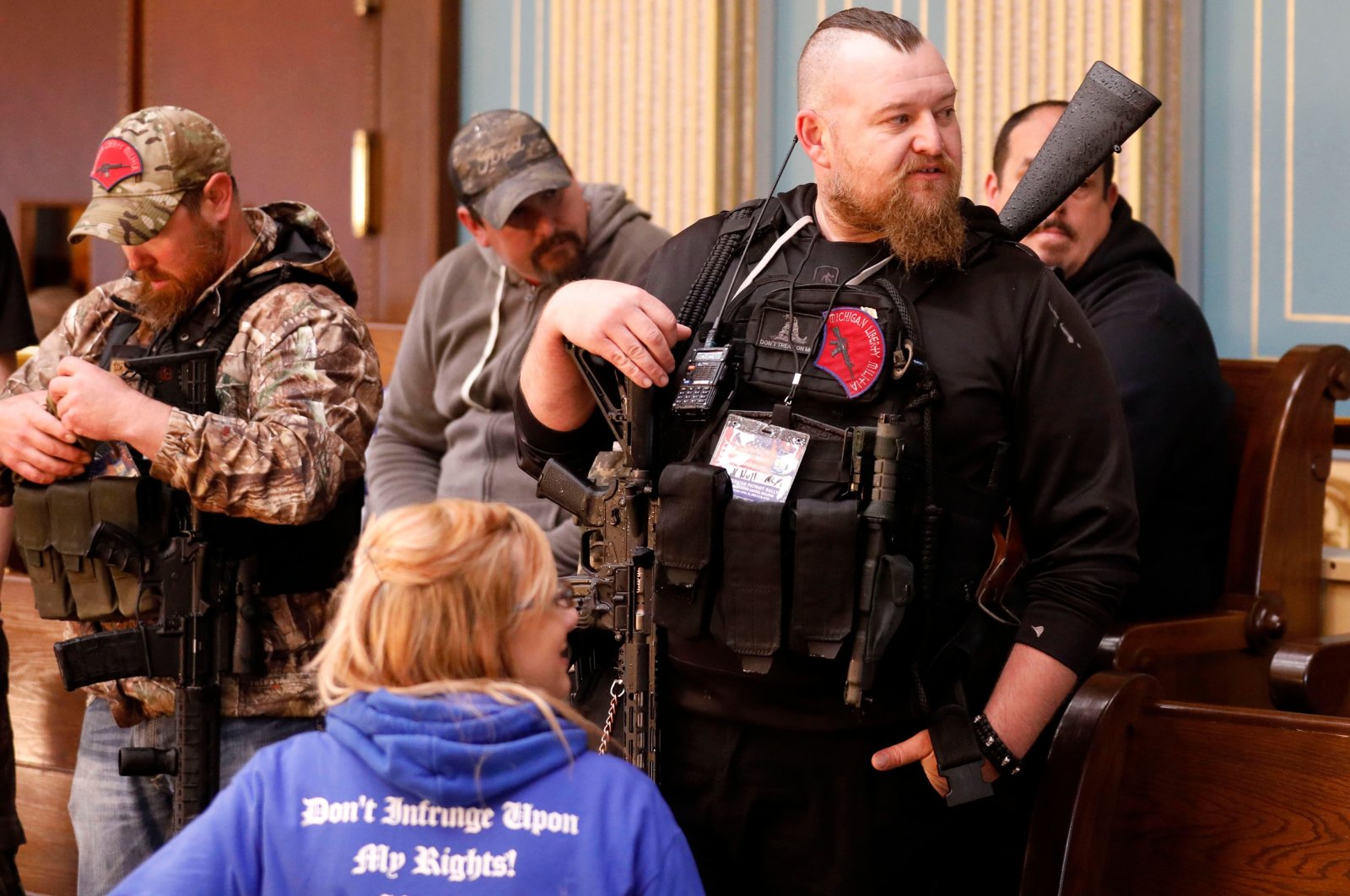 William Null (R), one of suspected kidnappers, stands in the gallery of the Michigan Senate Chamber during the American Patriot Rally, organized by Michigan United for Liberty, to demand the reopening of businesses on the steps of the Michigan State Capitol in Lansing, Michigan, on April 30, 2020. (AFP Photo)
by REUTERS Oct 10, 2020 12:43 pm
RECOMMENDED

Six men arrested on suspicion of taking part in a plot by armed extremists to kidnap Michigan's governor have been arraigned on domestic terrorism and weapons charges, while a seventh awaits extradition from South Carolina, authorities said Friday.

All seven, described by prosecutors as members or associates of an anti-government militia group called the Wolverine Watchmen, were taken into custody late Wednesday as part of a joint state-federal investigation.

They are accused of conspiring to abduct Gov. Gretchen Whitmer, a Democrat who has clashed sharply with Republican U.S. President Donald Trump over her COVID-19 public health orders.

Prosecutors say the men also sought to single out law enforcement officers for intimidation, made threats of violence to incite civil unrest, and trained for an operation to storm the Michigan State Capitol in Lansing and take government officials hostage.

"Clearly this was not just talk," Michigan Attorney General Dana Nessel said in a CBS News interview Friday. "These were many overt actions. And so we thought it was time to move in before anybody lost their lives."

Nessel said the governor was informed of the investigation and briefed on developments over the past couple of months.

"At times, she and her family had been moved around as a result of activities that law enforcement was aware of," Nessel added.

Each of the seven men named in criminal complaints filed by Nessel's office is charged with providing material support for terrorist acts and possessing a firearm in the commission of a felony – both punishable by up to 20 years in prison.

Two of them – Pete Musico, 46, and Joseph Morrison, 26 – were additionally charged with belonging to a criminal gang and with committing a threat of terrorism. At their arraignment on Thursday, Musico and Morrison were each ordered to remain jailed on a $10 million cash bond, the attorney general's office said in a statement.

The bond for each of the four others was set at $250,000. Michigan prosecutors are working to extradite the seventh defendant from South Carolina, where he was arrested, the statement said. He, too, is charged with gang membership.

Various additional pretrial court proceedings were set for later this month, but no mention was made of any pleas being entered.

In addition to the seven suspects held on state charges, six men were arrested on federal charges of conspiring to kidnap the governor, for which they could face life in prison if convicted.

Michigan, a key swing state in the 2020 presidential race, became a focus of agitation earlier this year by Trump and his supporters, including various militia groups, who opposed strict stay-at-home orders imposed by Whitmer to curb the spread of the coronavirus.

At least three of the defendants charged by the state were among hundreds of protesters, many carrying weapons, who entered the Michigan capitol on April 30 as state lawmakers debated Whitmer's request to extend her emergency public health authority. Photos show all three men were armed.

Both Whitmer and Nessel accused Trump of inflammatory rhetoric that they said has fostered a climate of racism and political extremism. Trump lashed back by calling Whitmer the "lockdown queen" while denying he was encouraging violence or racism.