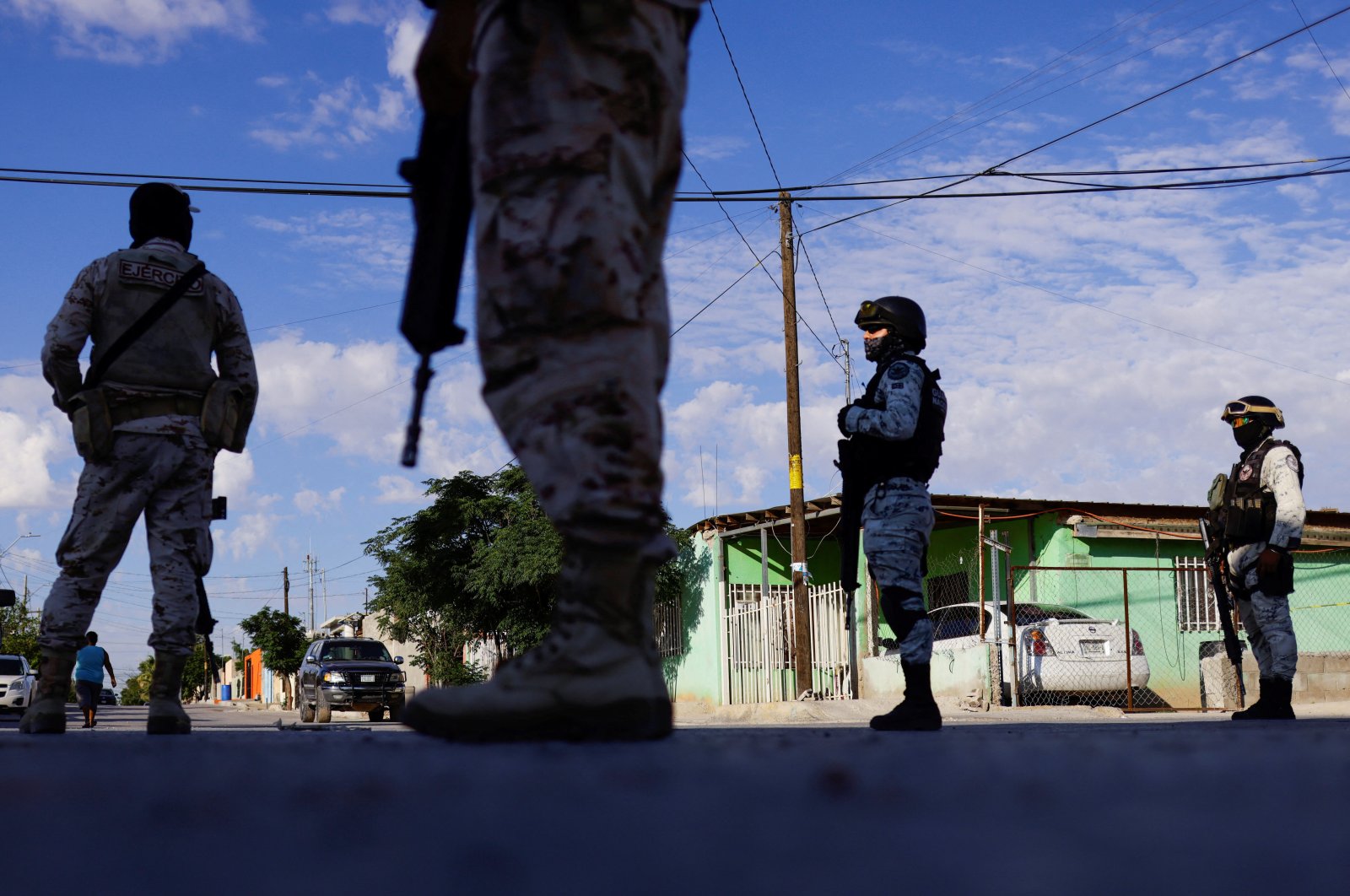 Members of the Mexican National Guard and the Mexican army stand guard at the crime scene where unknown assailants left the body of a woman wrapped in a blanket outside an elementary school, in Ciudad Juarez, Mexico July 2, 2022. (Reuters Photo)
by Agencies Jul 04, 2022 11:31 pm
RECOMMENDED

Mexican President Manuel Lopez Obrador's security policy continues to face growing scrutiny after seven members of the same family were murdered in the eastern state of Veracruz and as army members across the country struggle to stifle violence.

Three women and four men, including a minor, were shot at their home in the municipality of Boca del Rio in the eastern state of Veracruz, the prosecutor's office said.

They belonged to a single family that ran a chain of butcher shops, a National Guard source who did not want to be named told Agence France-Presse (AFP).

More than 340,000 people have been killed in a spiral of bloodshed since Mexico deployed the army to fight drug cartels in 2006.

The government blames most of the deaths on gangs involved in crimes including drug trafficking, fuel theft, kidnapping and extortion.

Questions about Lopez Obrador's security strategy have mounted since two Jesuit priests were murdered on June 27 in a church in the northern state of Chihuahua.

Catholic leaders have joined the opposition in criticizing the government.

On Saturday, a member of the armed forces died during an operation in which three alleged drug traffickers were captured in the northwestern state of Sonora, Lopez Obrador told reporters Monday.

He defended his security policy, which has focused on tackling the root causes of violence, including poverty.

"We are convinced that violence cannot be confronted with violence," Lopez Obrador said.

He called it a "serious mistake" for Mexico to have "declared war on crime" in 2006 under then-President Felipe Calderon.

In another incident of violence on Monday, a Mexican army patrol was surrounded and attacked in the town of Altar, Lopez Obrador also said.

Altar, about 60 miles (100 kilometers) south of Sasabe, Arizona, has long been known as a staging ground for immigrant smuggling and is reportedly controlled by a faction of the Sinaloa cartel.

Lopez Obrador said that on Sunday soldiers had detained three criminal suspects, but were quickly surrounded by 10 or 15 pickups and 60 gunmen.

The assailants outnumbered the soldiers 10 to one, Lopez Obrador said.

He said the assailants offered soldiers $500,000 to free one of the detained suspects, and when soldiers refused, a gunfight broke out and one soldier was killed.

Sonora Governor Alfonso Durazo wrote in his social media accounts that four suspects had been detained for weapons possession.