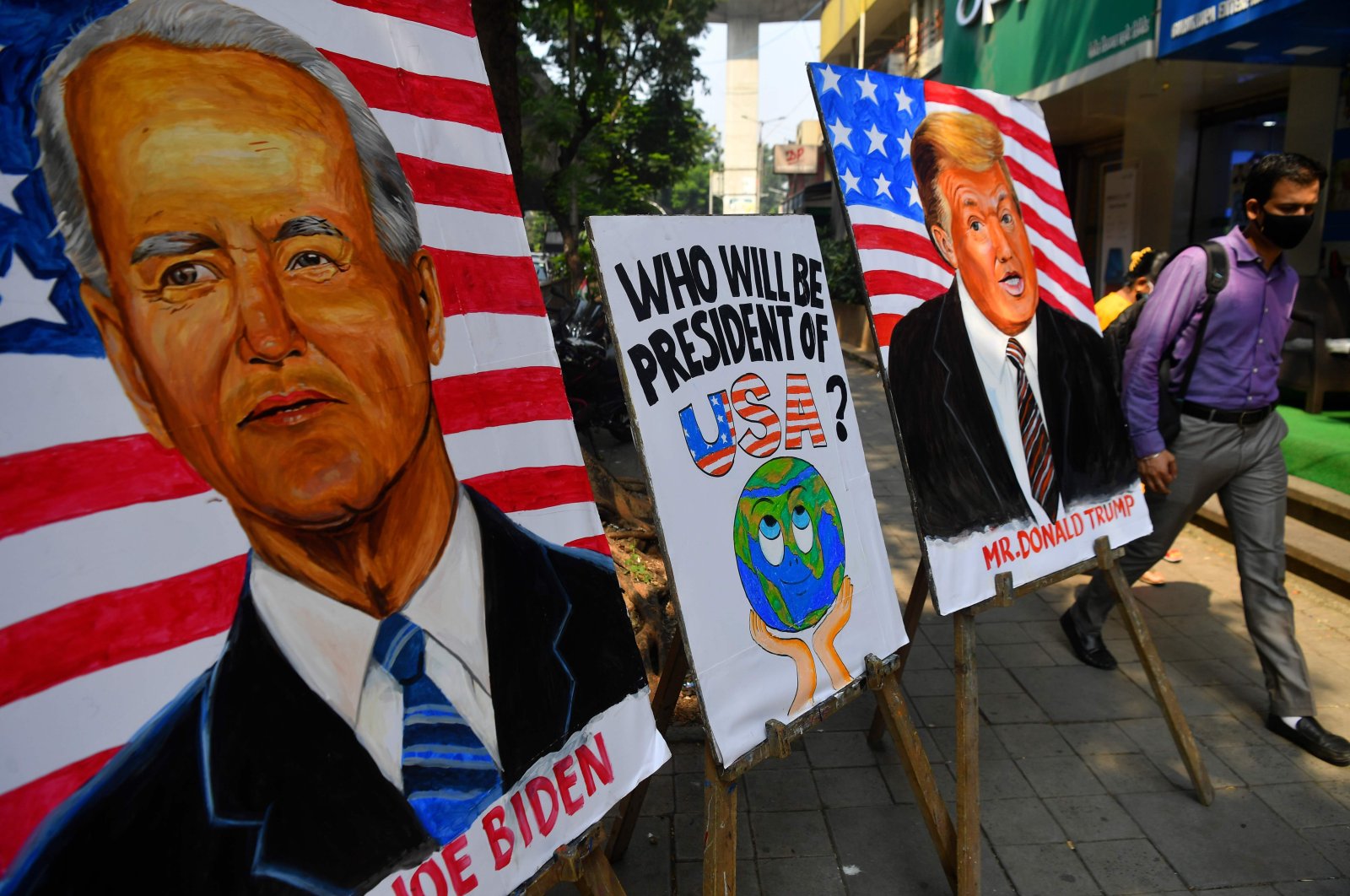 A commuter walks past the painted images of U.S. President Donald Trump and Democratic presidential candidate and former U.S. Vice President Joe Biden ahead of the upcoming presidential elections, outside an art school in Mumbai on Oct. 29, 2020. (AFP Photo)
by REUTERS
Oct 29, 2020 1:08 pm

Dozens of activist groups who claim to represent millions of Americans from both political parties plan to hit the streets next week if President Donald Trump appears to be interfering with vote counting or manipulating poll results after Election Day.

The Protect the Results coalition of over 130 groups from Planned Parenthood to Republicans for the Rule of Law, has about 400 events planned to date. Participants are prepping to demonstrate "as early as the afternoon on Wednesday, November 4," the day after Election Day and await an SMS message.

"We can’t assume that Donald Trump will respect the peaceful transfer of power," said Sean Eldridge, the founder and president of Stand Up America, which started organizing the coalition in June.

If Trump tries to interfere in the counting of ballots, or pressures state or local officials to say ballots should no longer be counted "then we would mobilize," he said.

Determining ahead of time, how, exactly, to define "interference" by the U.S. president is difficult, activists said, but it could include refusing to accept state vote tallies or prematurely declaring victory.

"We are very concerned that Trump is going to try to steal this election, using his position of power," said Kaela Bamberger, an organizer with Shut Down DC, which plans civil action that may include stopping traffic in the U.S. capital, with dozens of other groups.

Lessons from other countries that have suffered coups show that "time is of the essence," Bamberger said. "The longer the person claims to be in power and tries to force their position of power to be extended, the more likely it is there's nothing to be done about it."

Trump has not committed to a peaceful transfer of power, instead warning, without evidence, of the possibility of fraud from mail-in ballots. Other Republicans have rejected the idea that he won't step down if defeated.

Trump said this week a result should be announced on Tuesday, an unlikely scenario given the huge jump in mail-in ballots that need time to be counted because of the coronavirus pandemic.

"The president will accept the results of a free and fair election," White House Deputy Press Secretary Sarah Matthews said in response to questions about the activists' plans.

We Count on Us, a coalition of student activists, plans hundreds of proactive, peaceful demonstrations at city halls and counting centers to "make sure no lines are crossed," said Neha Desaraju of the Sunrise Movement, which is a part of the coalition.

Others are focused on keeping voters patient until results are announced.

"Because of the pandemic, things look different this year, and that will require us to be more patient than usual," Beckel said. Election experts in these states are already warning it could be days before results are known, he added.