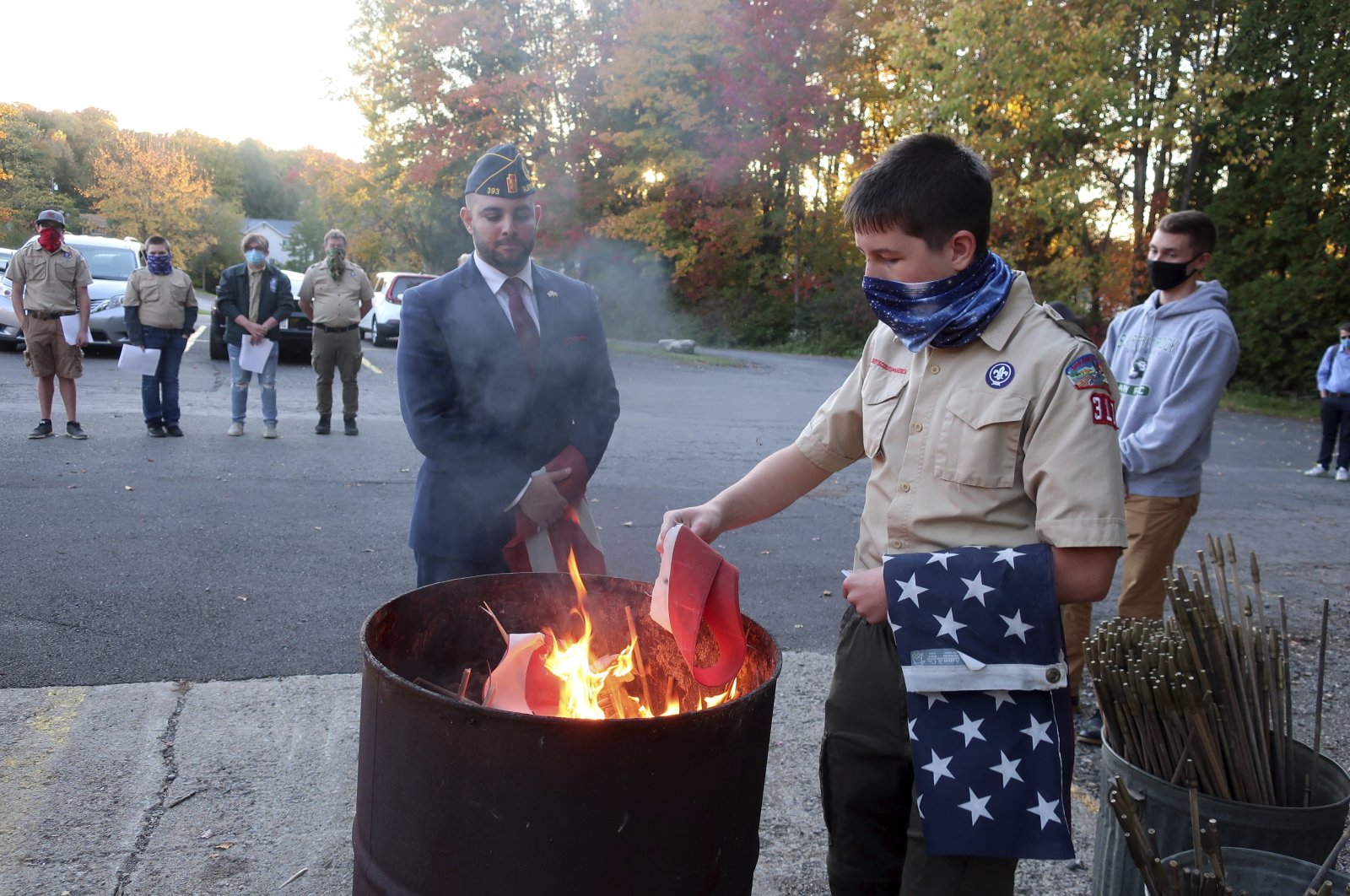 Donald Trump lost the presidential elections and he is soon to leave the White House to President-elect Joe Biden. Yet, Americans say the unity in the nation has been lost and the divide will linger within the society

Elections are meant to resolve arguments. This one inflamed them.

Weeks after the votes have been counted and the winners declared, many Americans remain angry, defiant and despairing. Millions now harbor new grievances borne of President Donald Trump's baseless claims of election fraud. Many Democrats are saddened by results that revealed the opposition to be far more powerful than they imagined.

And in both groups, there are those grappling with larger, more disquieting realizations: The foundations of the American experiment have been shaken – by partisan rancor, disinformation, a president's assault on democracy and a deadly coronavirus pandemic.

There is a sense of loss.

It burdens even the winners. In North Carolina, a soon–to–be state lawmaker whose victory made history says he is struck by how little feels changed. In Michigan, a suburban woman found her feminism in the Trump era only to see her family torn by the election outcome.

In a Pennsylvania town, the simple things still feel fraught. Plans for a small–town Christmas market spiraled into a bruising fight over public health and politics.

"What is holding our country together?" wonders Charisse Davis, a school board member in the Atlanta suburbs, where the election has not ended. A pair of Senate runoffs on Jan. 5 will decide which party controls the U.S. Senate.

Davis may get her answer soon. A vaccine has brought hope and a chance for a nation to approve it can do big things again. New leadership in Washington may change the tone.

But now, at the end of 2020, many Americans say the experiences of the past four years have made them look at their neighbors – and their country – in a different light.

It's been a tumultuous few months for Ricky Hurtado. The 32–year–old son of a Salvadoran immigrant won a seat in the North Carolina state legislature as a Democrat representing a suburban slice of Alamance County.

Hurtado's wife, Yazmin Garcia, earned her U.S. citizenship six days before the election. The couple drove directly from the immigration office where she became a citizen to the nearest early voting site, so she could register on the spot and cast a ballot for her husband.

But Hurtado still can't shake the feeling that, despite all this, little changed. He'd hoped to be part of a Democratic wave that took back his state legislature, hold seats on the state Supreme Court and the U.S. Senate. Instead, Democrats fell short in all those efforts. Trump won North Carolina just as he did in 2016.

"The election certainly makes it feel like Alamance and North Carolina voted for the status quo," Hurtado said. "It feels like we haven't moved in any given direction."

The win made Hurtado the first Latino Democrat ever elected to the state legislature.

After the election, he was flooded with texts and in–person congratulations from well–wishers, including one immigrant mother at an event who told him: "For you to win here, in Alamance County, is so important for my children."

Still, Hurtado is struggling to understand how there was a shift among Latinos toward Trump in the election. The president's strong performance with Cuban Americans in South Florida narrowed the traditional Democratic edge in Miami–Dade County and helped put Florida in Trump's column. In Texas, Trump won tens of thousands of new supporters in predominantly Mexican American communities along the border.

It didn't shock Hurtado. Political opinions are shaped by more than family heritage, race or gender or political party.

"It shows you, your identities are complex," he said.

Gap too wide to close

In the Pennsylvania college town of Slippery Rock, population 3,600, the annual Christmas market was supposed to be the bright spot in a dismal year.

Republican Mayor Jondavid Longo donated his salary – $88 a month after taxes – to help pay for the market that drew 25 vendors and 500 people. He hoped the outdoor event would bring holiday cheer and a much–needed injection of cash to the town's struggling businesses. Perhaps, he figured, a cozy event would also drown out any bitter feelings about the presidential election and the pandemic.

But neither politics nor the pandemic could be escaped.

Things began to devolve on Twitter. Photos surfaced showing few people in masks, leading to criticism that the event might have spread the novel coronavirus.

The mayor said his critics were Democrats and that he believed the market did little in terms of infection. Critics could note that the death toll from the pandemic in rural Butler County has jumped more than four–fold since the Nov. 3 election to roughly 170 people.

"We were outside so I thought things were reasonable," Longo said. "COVID was only an issue for individuals who were trying to stoke the flames of fear and discontent."

Trump won Butler County handily in November, evidence of his campaign to supercharge turnout in rural, conservative places as he cedes ground in the cities and suburbs. It wasn't enough to win Pennsylvania – or other industrial swing states – as President–elect Joe Biden's campaign also managed to motivate even more hard–to–reach voters. But the strategy will have a lasting impact as the physical distance between Democratic areas and Republican areas grows wider.

Longo says the election has changed politics in his town, surfacing resentments from voters on both sides. The lingering tensions now overshadow issues once considered local – such as funding the police and libraries.

"Party politics from the national stage have seeped down into the cracks and crevices of small towns like Slippery Rock," Longo said. "It's really difficult to close the gap and bridge the divide."

In Cobb County, Georgia, Davis popped a bottle of champagne, despite a nagging sense of sadness, then packed the family into the car to head into downtown Atlanta and join thousands dancing in the street.

She decided to just enjoy victory on the Saturday that news organizations called the presidential race for Biden.

"We'll go back to worrying about humanity tomorrow," she said to her family as they climbed in the car. And then tomorrow arrived and the worry roared back.

Davis, who serves on the school board in suburban Cobb County, was part of a wave of Black women elected to public office in recent years. Women like her led the charge that ushered Biden to an unlikely victory in Georgia.

"We won, but it doesn't really feel like we did," she said.

Trump immediately began sowing doubts about the vote, tossing out specious claims of fraud. Tens of millions of Americans – 36% of Republicans in a recent Fox News poll – now believe the claims that the election was rigged and he was the rightful winner.

"I think the election was totally paid for and rigged by the Democrats. I believe there was huge amounts of fraud and representation and illegal processing," said Pamela Allen, a 72–year–old retiree from Holiday, Florida, who has supported Trump since he came down the escalator in Trump Tower in 2015 to announce his candidacy.

Allen, who worked as a poll watcher in Pasco County, said she saw no problems on Election Day.

"Here in Pasco I have to admit it was very well done," she said. But she believes things she's seen on the conservative Trump–favored Newsmax about alleged voter fraud in other states. She is "baffled" as to why Attorney General William Barr hasn't arrested anyone, and "amazed" that the Supreme Court didn't rule in Trump's favor. Barr, viewed by Democrats as a staunch Trump loyalist, instead made clear he had seen no evidence of widespread fraud.

"I would support martial law if that is what he believes he needs to do. I would support absolutely anything Donald Trump proposes to keep the government going in the direction we were going in. As opposed to Biden running the country, absolutely," she said.

Trump's efforts to toss out votes came in heavily Black cities, which to Davis represents an ugly history of trying to repress Black voices. She watched a recent debate, when Kelly Loeffler, one of the two Republican senators in runoffs to retain their seats, refused to say Trump lost.

How, Davis worries, can a country recover from that?

"Do we have a democracy or do we not?" she said.

In her county, formerly a Republican stronghold, the election marked an extraordinary transition: Democrats won victories in most countywide offices, including sheriff, district attorney and a majority on the Board of Commissioners, which is now governed solely by women, most of them Black.

But that blue wave stopped short of flipping the seven-member school board. Davis, one of three Democrats, will remain in the minority. The impact of those results quickly made itself clear to her: Just after the election, the school board split along party and racial lines to vote to disband a committee it had created to review the names of its schools. Some of the schools are named after a Confederate general and a member of a slave-owning family.

"If Democrats say something, then the other side has to be against it. That's just where we are," Davis said. "I don't know how we get past this."

'Trump is not gone'

In suburban Michigan, a coalition of suburban women achieved what they set out to do – help evict Trump from the White House. But Lori Goldman, in Oakland County, Michigan, who runs the group Fems for Dems, can't shake the sense that their mission now is more critical than it's ever been.

"We got rid of this blight, this cancer," said Goldman, 61. "We cut him out. But we know that cancer has spread, it's spread to soft tissue, other organs. And now we have to save the rest of the body."

Trump isn't gone, not really, she said. She is horrified at the number of Americans who believe his unsubstantiated claims of widespread voter fraud.

"That's a dangerous, dangerous place to be in," she said. "This country is in a lot of trouble."

It feels to her that the United States is caught in a period of great transition. The bright, progressive future she longs for seems inevitable. But she thinks a large portion of America would prefer to turn back the clock.

Trump called people like her the "suburban housewives of America," and tried to appeal to them by spreading fear about Black Lives Matter protesters, crime and low-income housing. Still, Biden won 54% of suburban voters, according to AP VoteCast, a survey of the electorate.

Goldman can't understand why 74 million Americans voted for Trump. She went on national television and said she was ashamed that most of her own relatives were among them. Now some of her siblings don't want to talk to her anymore.

To her, this is a microcosm of one of the greatest challenges this country has faced: that tribalized politics has pitted people against each other in a way far more profound than ever before. It is no longer Republicans versus Democrats. It has splintered families and friends.

She weeps when she talks about the rift.