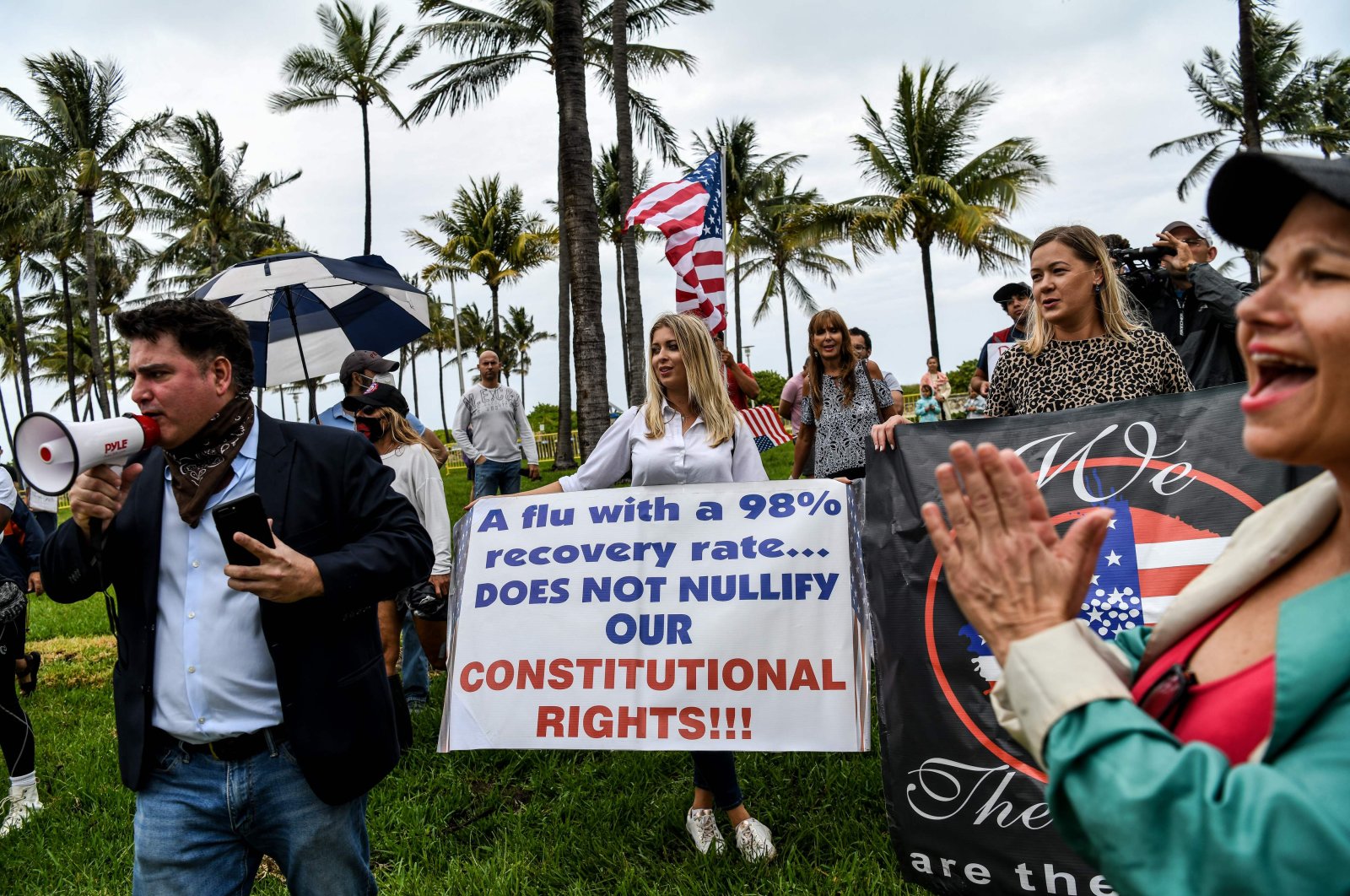 Protestors hold placards, wave the American flag and shout slogans as they participate in a "Freedom Rally" protest in support of reopening Florida, South Beach, Miami, May 10, 2020. (AFP Photo)
by DAILY SABAH WITH AGENCIES May 11, 2020 3:46 pm
RECOMMENDED

As anti-lockdown rallies continue to spread in Germany and the U.S., reactions have grown as protests threaten the battle against the coronavirus outbreak.

German politicians expressed alarm on Monday over anti-lockdown protests held in major cities over the weekend, warning that conspiracy theorists and others with an agenda were exploiting frustration with measures to contain the coronavirus pandemic. While protests held in Berlin, Munich and Stuttgart were relatively modest in size, several resulted in violent clashes with police as densely packed crowds violated social distancing requirements designed to prevent the virus from spreading. The leadership duo of Germany's center-left Social Democrats (SPD) has warned of radical elements among protests against coronavirus restrictions.

In the U.S., where large numbers of people are still dying from COVID-19, a majority of Americans disapprove of protests against restrictions aimed at preventing the spread the coronavirus, according to a new poll that also finds the still-expansive support for such limits – including restaurant closures and stay-at-home orders – has dipped in recent weeks.
The new survey from the University of Chicago Divinity School and The Associated Press-NORC Center for Public Affairs Research finds 55% of Americans disapprove of the protests that have popped up in some states as some Americans begin chafing at public health measures that have decimated the global economy. Thirty-one percent approve of the demonstrations.

Armed protesters gathered at the U.S. state of Michigan's Capitol in late April, seeking to end to governor's emergency measures while ignoring social-distancing rules. The protest appeared to be the largest in the state since April 15, when supporters and allies of President Donald Trump organized thousands of people for "Operation Gridlock," jamming the streets of Lansing with their cars to call out what they said was the overreach of Democrat Gov. Gretchen Whitmer’s strict stay-at-home order.
It was one of the country’s first major anti-lockdown rallies and helped sparked a wave of similar events nationwide.