As coronavirus deaths surpass 40,000 in US, governors tell Trump it's too soon to reopen America 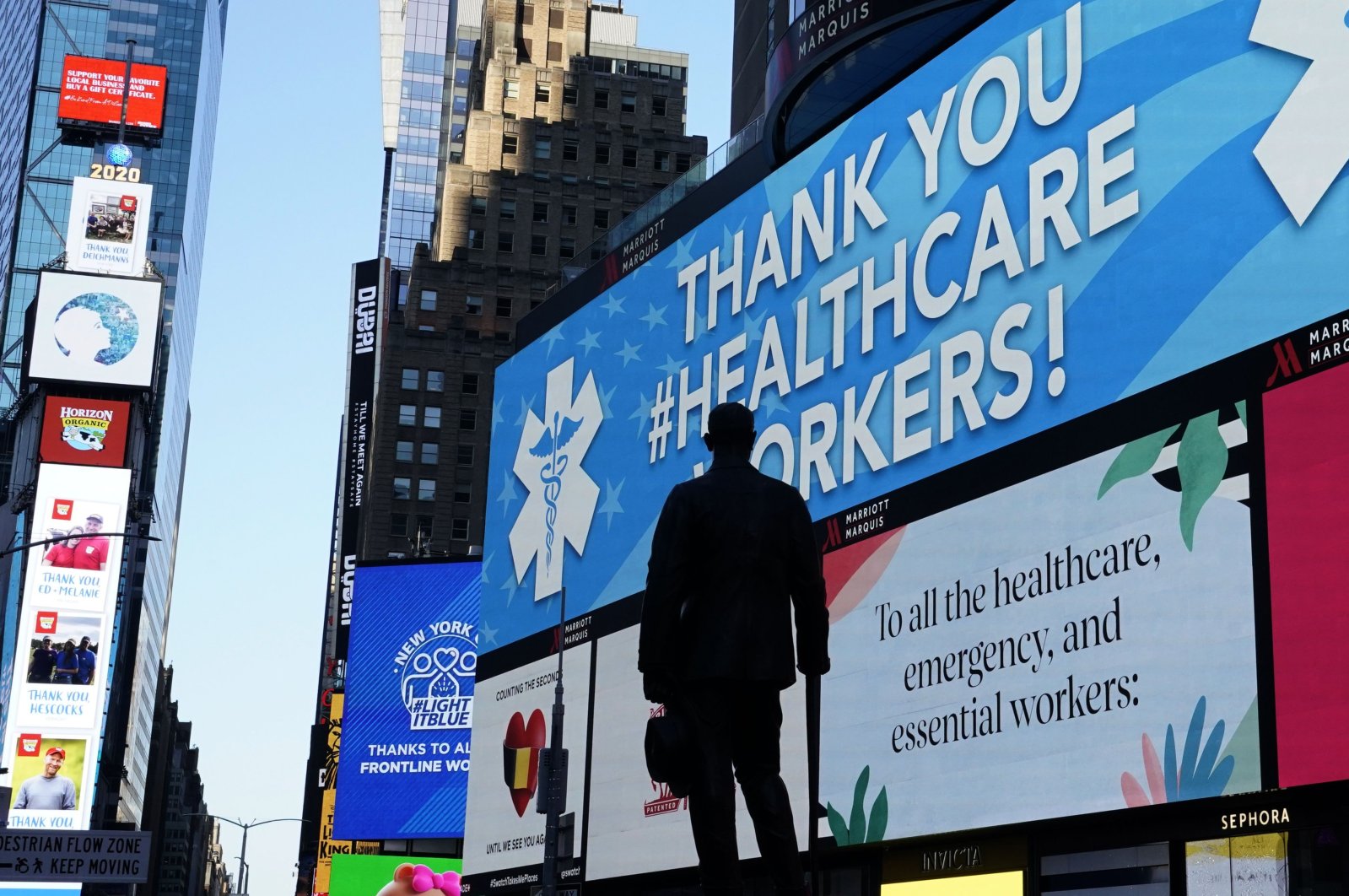 The statue of composer George M. Cohan is seen in Times Square in New York City, while in the background some of the nearly 1,800 digital billboards and screens across all five boroughs are displaying messages of public safety, gratitude, pride and solidarity with essential workers, New York, U.S., April 19, 2020. (AFP Photo)
by REUTERS Apr 19, 2020 7:08 pm
RECOMMENDED

Governors in U.S. states hardest hit by the novel coronavirus sparred with President Donald Trump over his claims they have enough tests and should quickly reopen their economies as more protests are planned over the extension of stay-at-home orders. Meanwhile, the number of coronavirus cases in the United States has surpassed 742,000 and death toll topped 40,585, according to information by Johns Hopkins University.

"The administration I think is trying to ramp up testing; they are doing some things with respect to private labs," said Republican Gov. Larry Hogan of Maryland during a CNN interview. "But to try to push this off, to say the governors have plenty of testing and they should just get to work on testing, somehow we aren't doing our jobs, is absolutely false."

Democratic Gov. Ralph Northam of Virginia told CNN that claims by Trump and Vice President Mike Pence that states have plenty of tests were "just delusional."

The region of Maryland, Virginia and Washington, D.C. is still seeing increasing cases even as the epicenter of the U.S. outbreak, New York, has started to see declines. Boston and Chicago are also emerging hot spots with recent surges in cases and deaths.

Several states, including Ohio, Texas and Florida, have said they aim to reopen parts of their economies, perhaps by May 1 or even sooner, but appeared to be staying cautious.

Trump's guidelines to reopen the economy recommend a state record 14 days of declining case numbers before gradually lifting restrictions. Yet the Republican president appeared to encourage protesters who want the measures removed sooner with a series of Twitter posts on Friday calling for them to "LIBERATE" Michigan, Minnesota and Virginia, all run by Democratic governors.

Demonstrations to demand an end to stay-at-home measures that have pummelled the U.S. economy have erupted in a few spots in Texas, Wisconsin and the capitols of Ohio, Minnesota, Michigan and Virginia. More than 22 million Americans have filed for unemployment benefits in the past month.

Trump had touted a thriving economy as the best case for his re-election in November.

On Saturday, several dozen protesters gathered in the Texas capital of Austin chanting "USA! USA!" and "Let us work!"

In Brookfield, Wisconsin, hundreds of demonstrators cheered as they lined a main road and waved American flags to protest at the extension of that state's "safer at home" order.

The demonstrators mostly flouted the social-distancing rules and did not wear the face masks recommended by public health officials.

U.S. lawmakers are very close to an agreement on approving extra money to help small businesses hurt by the coronavirus pandemic and could seal a deal as early as Sunday, congressional and Trump administration officials said.

An agreement would end a stalemate that has lasted more than a week over Trump's request to add $250 billion to a small-business loan program. Congress established the program last month as part of a $2.3 trillion coronavirus economic relief plan, but it has already run out of money.