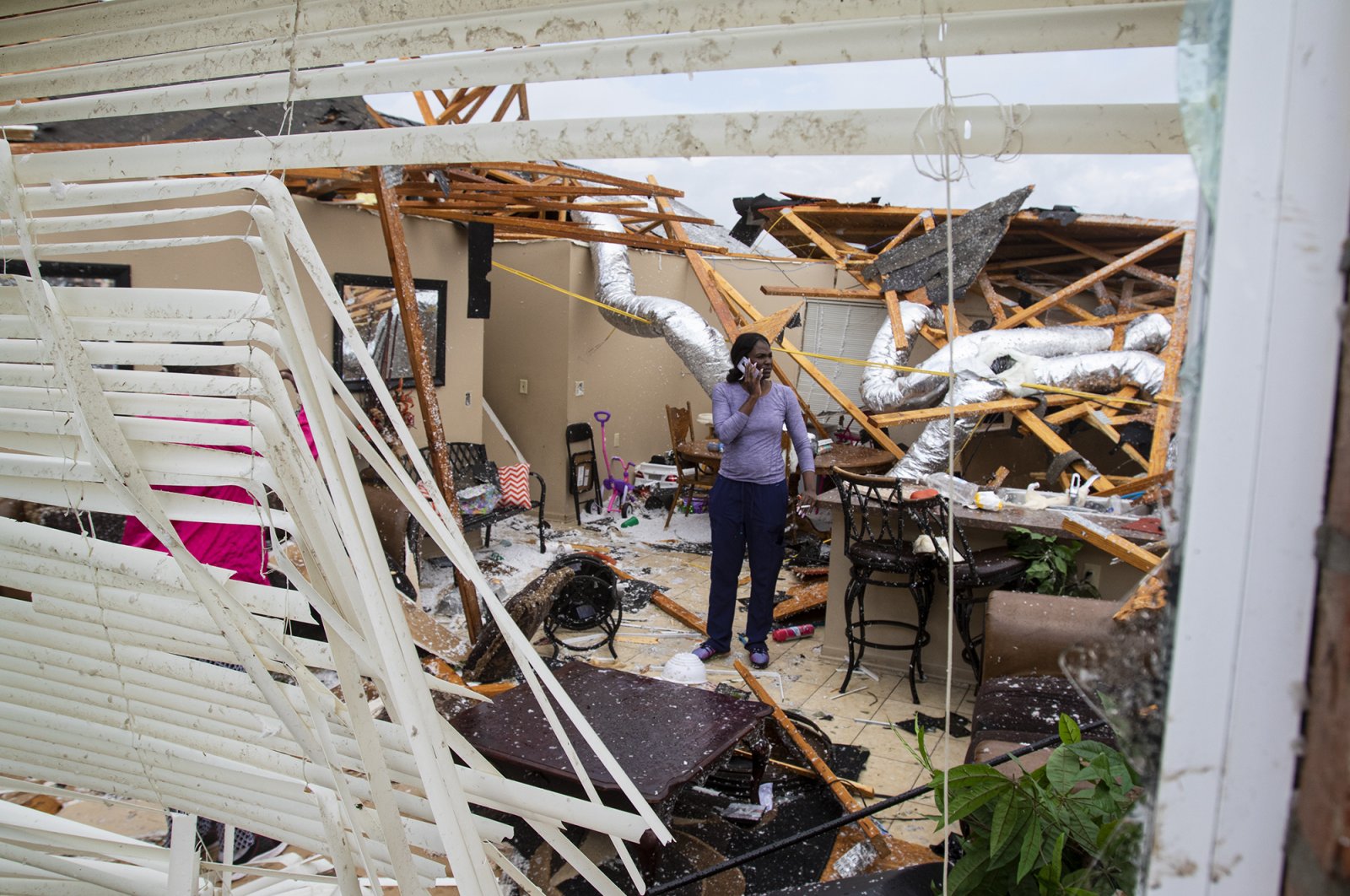 Rolanda Robinson calls family and friends from her brother's damaged home in Monroe, La. after a tornado ripped through the town on Sunday, April 12, 2020. (AP Photo)
by Compiled from Wire Services Apr 13, 2020 8:13 am
RECOMMENDED

At least six people were killed when tornadoes ripped through Mississippi on Sunday, officials said, prompting the southern U.S. state to declare an emergency.

The tornadoes caused "catastrophic" damage, according to U.S. media, and prompted the National Weather Service to issue its highest level of tornado alert.

Governor Tate Reeves tweeted that he had declared a state of emergency "to protect the health and safety of Mississippians in response to the severe tornadoes and storms hitting across the state."

"This is not how anyone wants to celebrate Easter,” Reeves said on Twitter. "As we reflect on the death and resurrection on this Easter Sunday, we have faith that we will all rise together.”

"We are mobilizing all resources available to protect our people and their property," Reeves said, telling residents "you are not alone."

Strong winds late Sunday toppled power lines and blew trees onto several houses in Clarksdale, Mississippi, trapping some people inside, Mayor Chuck Espy said. "I know these are some tough times and I’m just asking everyone to stay prayed up,” Espy said.

The Mississippi Emergency Management Agency reported that all six deaths occurred in the southern part of the state.

"These are initial reports and will continue to update when info becomes available," the agency tweeted.

The Storm Prediction Center said it expected "severe thunderstorms" to continue through the night in Mississippi, as well as in the neighboring states of Alabama and Georgia.

He later retweeted a message from the state disaster agency reminding people to cover their noses and mouths and practice social distancing to prevent the spread of coronavirus if they had to go to public storm shelters.

Before the storms moved into Mississippi, the weather service reported multiple tornadoes and damaging winds over much of northern Louisiana. There were no immediate reports of serious injuries. Utility companies reported thousands of power outages.

The mayor of Monroe, Louisiana, Jamie Mayo, told KNOE-TV that the storm damaged 200-300 homes in and around the city. Flights were canceled at Monroe Regional Airport, where the siding was ripped off buildings and debris was scattered on runways. Airport director Ron Phillips told the News-Star the storm caused up to $30 million in damage to planes inside a hangar.

In northwest Louisiana, officials reported damage to dozens of homes in DeSoto and Webster parishes, according to news outlets.