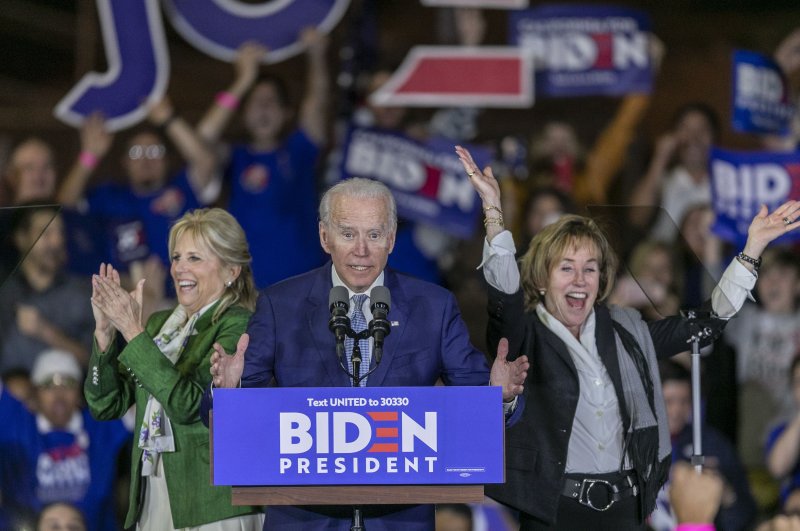 Former Vice President Joe Biden made a Super Tuesday sweep across the south, winning contests in eight states and setting up a two-way race between him and left-wing Senator Bernie Sanders for the Democratic Party's presidential nomination.
77-year-old Biden was buoyed by strong support among older voters and African-Americans – two key Democratic constituencies – who carried him to wins in Alabama, Arkansas, Oklahoma and Tennessee in the south, Massachusetts on the east coast and northern Minnesota.
The boost for Biden, who was on the verge of being written off in the last few weeks, is a blow for Sanders, 78, who is projected to win Vermont, Utah and Colorado during Super Tuesday when a third of all delegates in the primary race are on the table.


Sanders and Biden were virtually tied in Texas, the state with the second-largest share of delegates, in what was being seen as a jolt for the former vice president, who was predicted to come in a distant second. Biden may yet pull off a win in the state.
Left-winger Sanders had a lead in preliminary exit surveys coming out of California, the last state to see its polling stations close, in part thanks to his support among Latino communities, who make up a sizeable chunk of the electorate out west.
California is the single most important race, with 415 delegates up for grabs out of 1,357 across the country on this one day alone. Biden was leading in the overall delegate count on Super Tuesday, though both he and Sanders secured more than 200 delegates with tallying ongoing.
Billionaire Mike Bloomberg, who spent hundreds of millions of dollars on campaign ads, largely underperformed, failing to reach victory in a single state and securing a win only in American Samoa, an outlying territory.
Bloomberg sought to take on Biden as the moderate front-runner who was able to spend his own money to defeat Trump. However, Biden's success defied allegations he was unelectable and that his frequent gaffes were a liability for the party.
Reports by major U.S. broadcasters said Bloomberg's team was going to reassess its next steps on Wednesday. Also suffering heavy blows was Elizabeth Warren, the progressive senator, who came in third in her home state Massachusetts. However, she has shown no signs of bowing out, despite pressure from some Sanders supporters to open up space in the left-wing lane by dropping her bid. Candidates need to surpass 1,991 delegates to win the nomination by the party's convention in July.
Biden will need to continue to build momentum in the remaining races and soundly defeat Sanders in key states to ensure he has a clear victory, otherwise, there may be a brokered convention, which will be contentious.
The results indicate Sanders failed to build the coalition he needed to win, even as he secured clear margins of victory among younger voters of all ethnic backgrounds in most areas taking part in Super Tuesday.
Biden and Sanders are increasingly attacking each other, with the former saying his rival is pitching an unrealistic political revolution.
Sanders goes after Biden's vote for the war in Iraq in 2003, his reliance on money from special interest and billionaires and support for cutting social programs.
Both candidates contend that they are best positioned to defeat Trump in November, a major concern for Democratic partisan.
"I'm here to report, we are very much alive. And make no mistake this campaign will send Donald Trump packing," Biden said at a rally in Los Angeles, sounding upbeat. "Things are looking awful, awful good," Biden said.
In Vermont, Sanders pressed on, touting his progressive campaign of implementing a government-run health care system, criminal justice reform and a broad climate change initiative.
"You cannot defeat Trump with the same old, same old kind of politics," Sanders told supporters in Vermont, his home state. "We are going to defeat Trump because we are putting together an unprecedented grass-roots multi-generational multi-racial movement."
In multiple states, the most important issue for voters was health care, according to exit polls conducted by CNN, and large percentages of voters did not make up their minds until days before the elections.
Biden's campaign has renewed energy in recent days after a win in South Carolina and endorsements from centrist and moderate candidates who have dropped out of the once-crowded field, in an apparent bid to consolidate around a politician who can beat Sanders. Biden says the country does not lean towards the left-wing ideas Sanders proposes and prefers a moderate who can beat Trump. Biden is relying heavily on his experience as former president Barack Obama's deputy, his support among some unions and his work for stricter gun laws.
Trump, who is running virtually unopposed in the Republican Party nomination contest, won all his races. He pledged to hold debates with whoever emerged as the winner in the Democratic race, adding he would do so "very gladly," voicing confidence he would get a second term in the White House.
RECOMMENDED