Concern grows over extremist clashes in US before November election 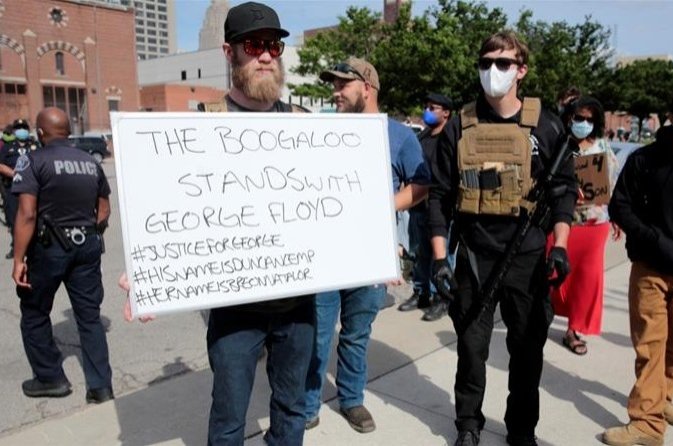 Wray said the Federal Bureau of Investigation is keeping a close eye on groups who have faced off in protests in various cities such as Portland, Oregon, and Kenosha, Wisconsin. In those places, anti-racism and anti-police groups have squared off with right-wing and white nationalist activists, who are often armed.

Wray told a congressional hearing that the FBI was deeply concerned about the growing tension on U.S. streets, and groups that are "hijacking" protests to incite violence.

"Now you've got an additional level of combustible violence," he said, citing "violent extremist groups or individuals committing violence." "Now you have both groups from the opposite sides adding to the combustibility and danger of the situation," Wray told the House Homeland Security Committee. "We have certainly seen that in a number of cities. That's a force multiplier, in a bad way, that I'm concerned about."

The growing presence of armed militia-style groups during protests over the police shooting of Jacob Blake and the killing of George Floyd has ignited further unrest and chaos in the U.S. In August, a 17-year-old with ties to arch-conservative groups was charged with shooting dead two people protesting against police mistreatment of blacks in Kenosha. And at the end of August in Portland, an activist aligned with the leftist Antifa movement shot dead a supporter of a far-right Patriot Prayer group during a protest. The Antifa shooter, Michael Reinoehl, was killed by police days later.

Wray told lawmakers that, aside from "lone wolf" attackers inspired by terrorist groups like Daesh, white supremacists remain the biggest domestic terror threat. "Within the domestic terrorism bucket as a whole, racially motivated violent extremism is, I think, the biggest bucket within that larger group," he told the committee.

Wray did point out that while white supremacists have been responsible for most of the lethal terror attacks inside the U.S. in recent years, there has been a noteworthy shift this year, with attacks by "anti-government, anti-authority" actors. That includes the May murder of two policemen in California by a follower of the extreme right, often heavily armed "Boogaloo Bois" movement.

In the same hearing, National Counterterrorism Center Director Christopher Miller confirmed that white nationalists were a particular focus of their concerns. He said some of the U.S. extremists have loose ties with similar groups in Germany and Russia, including the Russian Imperial Movement that Washington formally designated a terrorist group in April. But the links between U.S. white supremacists and the foreign groups are so far relatively loose and informal, Miller said.