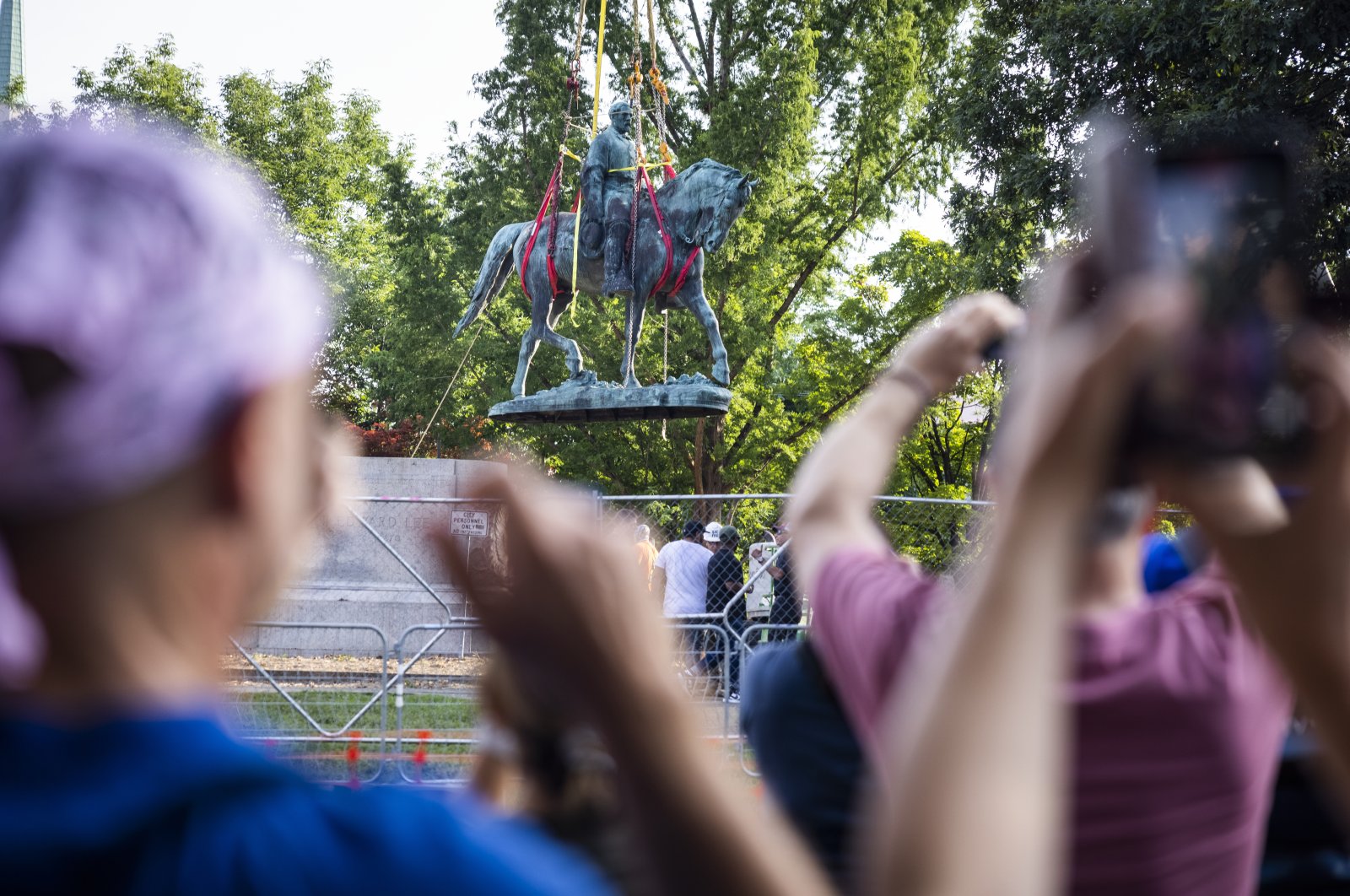 A Confederate monument that helped spark a violent white supremacist rally in Charlottesville, Virginia, has been hoisted off its stone pedestal.

Crews were also expected to take down a second Confederate monument.

Spectators by the dozens lined the blocks surrounding the park, and a cheer went up as the statue lifted off the pedestal. There was a visible police presence, with streets blocked off to vehicular traffic by fencing and heavy trucks.

Charlottesville Mayor Nikuyah Walker gave a speech in front of reporters and observers as the crane neared the monument.

"Taking down this statue is one small step closer to the goal of helping Charlottesville, Virginia, and America, grapple with the sin of being willing to destroy black people for economic gain,” Walker said.

The removal of the statue follows years of contention, community anguish and litigation. A long, winding legal fight coupled with changes in a state law that protected war memorials had held up the removal for years.

Saturday’s removal of a statue of Lee and another of Gen. Thomas "Stonewall” Jackson will come nearly four years after violence erupted at the infamous "Unite the Right” rally. Heather Heyer, a peaceful counterprotester, died in the violence, which sparked a national debate over racial equity, further inflamed by former President Donald Trump’s insistence that there was "blame on both sides.”

Ralph Dixon, a 59-year-old black man born and raised in Charlottesville, was documenting the removal work Saturday morning, a camera around his neck.

Dixon said he was brought to the park where the Lee statue stood as a school-aged child.

"All the teachers, my teachers anyway, were always talking about what a great person this was,” he said.

He said his understanding of Lee’s legacy and the statue’s message evolved as he became an adult. He said it was important to consider the context of the Jim Crow era during which the statue was erected and said especially after Heyer’s death there was no reason the statue should stay.

Only the statues, not their stone pedestals, will be removed Saturday. They will be taken down and stored in a secure location until the City Council makes a final decision about what should be done with them. Under state law, the city was required to solicit parties interested in taking the statues during an offer period that ended Thursday. It received 10 responses to its solicitation.

A coalition of activists commended the city for moving quickly to take the statues down after the offer period ended. As long as the statues "remain standing in our downtown public spaces, they signal that our community tolerated white supremacy and the Lost Cause these generals fought for,” the coalition called Take ’Em Down Cville said.

Jim Henson, who lives in nearby Barboursville, said Saturday he came to witness a "historic” event. He said he didn’t have a strong personal opinion on the issue of Confederate monuments but he thought Charlottesville was happy to see the saga come to a conclusion.

The most recent removal push focused on the Lee monument began in 2016, thanks in part to a petition started by high school student Zyahna Bryant.