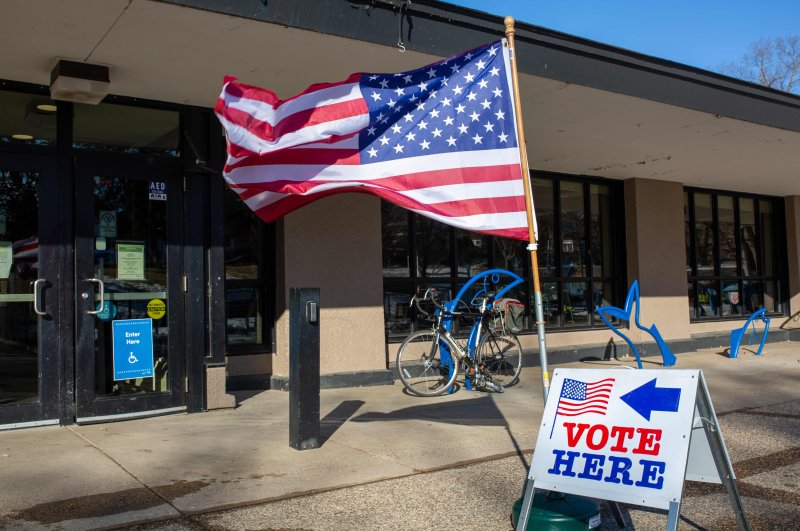 Signs are seen during the Democratic presidential primary at a polling station in Minneapolis, Minnesota on Super Tuesday, March 3, 2020. (AFP Photo)
by Compiled from Wire Services Mar 04, 2020 2:03 pm
RECOMMENDED

Biden won at least nine states, while left-wing Sen. Bernie Sanders had three in his pocket. Texas, the second-largest state, was a near dead-heat between the two leaders, but Biden secured a narrow victory. California, the most populous state, was leaning toward Sanders. Primaries are not a winner-take-all and what matters is who gets the most delegates on a proportional basis. Both candidates lack a pathway to a clear majority, constituting 1,991 delegates, by the party's convention in July.

Sanders, a 78-year-old leftist who wants to reshape America's economy, had been the clear leader and was looking for a knock-out blow on the most consequential voting day on the primary calendar. Instead, the results signaled a remarkable comeback for Biden, a former vice president under President Barack Obama. Just one week ago the 77-year-old senior statesman saw his campaign teeter on the edge of collapse. Now, he is vying once again for front-runner status.

A key takeaway from Biden's long list of wins was his strong support among African Americans, a vital piece in any Democratic presidential candidate's coalition. He seemed to fare less well with the large Hispanic electorate, which in California reportedly went heavily for Sanders. But a victory in Texas, which also has a diverse population, suggests Biden has the capacity to build a broad coalition. That was bolstered by Biden winning all five other southern states on the ballot Tuesday.

Former New York mayor Michael Bloomberg, 78, and Senator Elizabeth Warren, 70, were the other big-name candidates. Despite spending record amounts of his own money on advertising, it was an embarrassing debut for billionaire media entrepreneur Bloomberg, who failed to win any state, though he did get a consolation victory in American Samoa, a tiny territory in the Pacific.