Dozens of tornadoes kill at least 80 in Kentucky, other US states 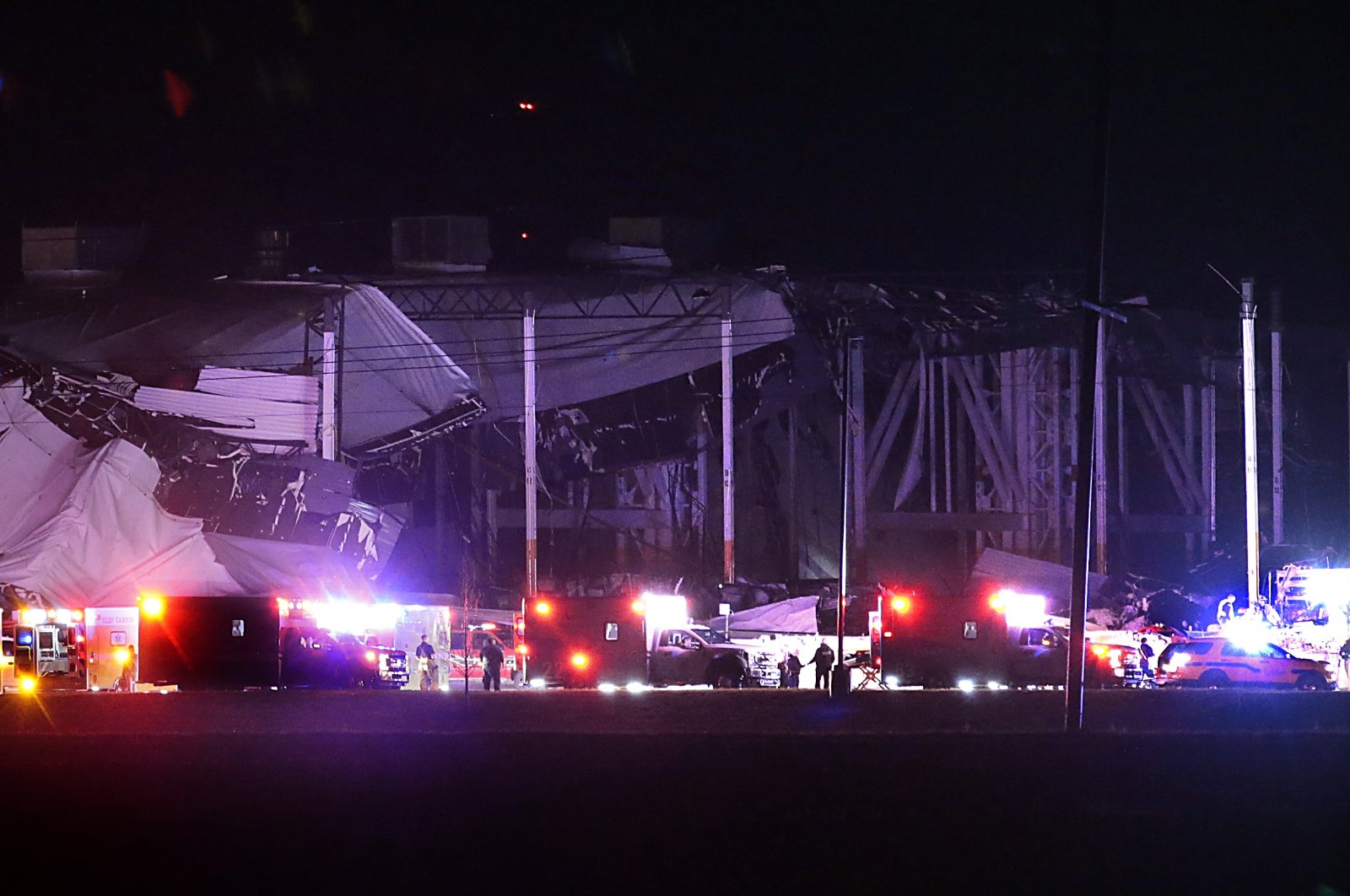 Rescue crews desperately searched for survivors on Sunday after dozens of strong tornadoes ripped through six states in the United States, leaving over 80 dead, dozens missing and towns in ruins in what U.S. President Joe Biden has labeled a national "tragedy."

The swarm of tornadoes left a trail of destroyed homes and businesses along a path stretching more than 200 miles (322 kilometers), officials said on Saturday, one of the longest on record.

More than 70 people are believed to have been killed in Kentucky alone, many of them workers at a candle factory, while at least six died in an Amazon warehouse in Illinois where they were on the night shift processing orders ahead of Christmas.

"This event is the worst, most devastating, most deadly tornado event in Kentucky's history," said state Governor Andy Beshear, adding he fears "we will have lost more than 100 people."

"The devastation is unlike anything I have seen in my life, and I have trouble putting it into words," he told reporters.

Biden called the wave of tornadoes, including one that traveled more than 200 miles, "one of the largest" storm outbreaks in American history.

"It's a tragedy," a shaken Biden, who pledged support for the affected states, said in televised comments. "And we still don't know how many lives are lost and the full extent of the damage."

Beshear, who declared a state of emergency in Kentucky, was also quoted as saying the damage would be "some of the worst ... we've seen in a long time."

The small western Kentucky town of Mayfield, population 10,000, was described as "ground zero" by officials, and appeared post-apocalyptic: city blocks leveled; historic homes and buildings beaten down to their slabs; tree trunks stripped of their branches; cars overturned in fields.

The tiny town was reduced to "matchsticks," its mayor Kathy O'Nan told CNN.

Beshear said there were 110 people working at the candle factory when the storm hit, causing the roof to collapse.

Forty people have been rescued, but it would be "a miracle if anybody else is found alive," he said.

CNN played a heart-rending plea posted on Facebook by a factory employee. "We are trapped, please, y'all, get us some help," a woman says, her voice quavering as a co-worker can be heard moaning in the background.

"We are at the candle factory in Mayfield ... Please, y'all. Pray for us."

The woman, Kyanna Parsons-Perez, was rescued after being pinned under a water fountain.

David Norseworthy, a 69-year-old builder in Mayfield, said the storm blew off his roof and front porch while the family hid in a shelter.

"We never had anything like that here," he told AFP.

In the southwestern Kentucky community of Mayfield, several buildings collapsed during the severe weather, said Sarah Burgess, a trooper with the Kentucky State Police.

Although no deaths were immediately reported in Mayfield, coroners were summoned to the community, Burgess said. "We do expect loss of life,” she said.

In one demonstration of the storms' power on Saturday, when winds derailed a 27-car train near Earlington, Kentucky, one car was blown 75 yards up a hill and another landed on a house. No one was hurt.

At least one fatality was also reported in Missouri as severe storms, some believed to be tornadoes, swept across the Midwest and parts of the South late Friday and into Saturday morning.

In Tennessee, at least four people died in the severe weather, with two storm-related fatalities reported in Lake County in the state’s northwestern corner, said Dean Flener, spokesperson for the Tennessee Emergency Management Agency. A third death was reported in neighboring Obion County. Flener said the Tennessee Department of Health confirmed the deaths; however, there were no other details immediately released.

Five people had serious injuries, and a few others had minor ones, he said. The nursing home has 86 beds.

Day said another nursing home about 20 miles away in Truman was badly damaged but no injuries were reported. The residents were being evacuated because the building is unsafe.

Workers at a National Weather Service office had to take shelter as a tornado passed near their office in Weldon Spring, Missouri, about 30 miles west of St. Louis.

One person died and two others were injured in building collapses near the towns of Defiance and New Melle, both just a few miles from the weather service office.

One of the tornadoes hit the Amazon warehouse in the southern Illinois city of Edwardsville, with around 100 workers believed to have been trapped inside.

"We identified 45 personnel who made it out of the building safely, one who had to be airlifted to a regional hospital for treatment, and six fatalities," Edwardsville fire chief James Whiteford told reporters.

At least 100 emergency vehicles descended upon the Amazon warehouse near Edwardsville, Illinois, about 25 miles east of St. Louis, where a wall that was about the length of a football field collapsed, as did the roof above it.

It wasn’t immediately clear how many people were hurt, but one person was flown by helicopter to a hospital.

Edwardsville Police Chief Mike Fillback said several people who were in the building were taken by bus to the police station in nearby Pontoon Beach for evaluation. By early Saturday, rescue crews were still sorting through the rubble to determine if anyone was trapped inside. Fillback said the process would last for several more hours. Cranes and backhoes were brought in to help move debris.

"Please be patient with us. Our fire personnel are doing everything they can to reunite everyone with their loved ones,” Fillback said on KMOV-TV.

"The safety and well-being of our employees and partners is our top priority right now,” Amazon spokesperson Richard Rocha said in a written statement Friday night. "We’re assessing the situation and will share additional information when it’s available.”

But he said the operation had turned from rescue to focus "only on recovery," fuelling fears the toll could yet rise.

Following the tragedy, Amazon chief Jeff Bezos said he was "heartbroken" at the deaths, tweeting: "Our thoughts and prayers are with their families and loved ones."