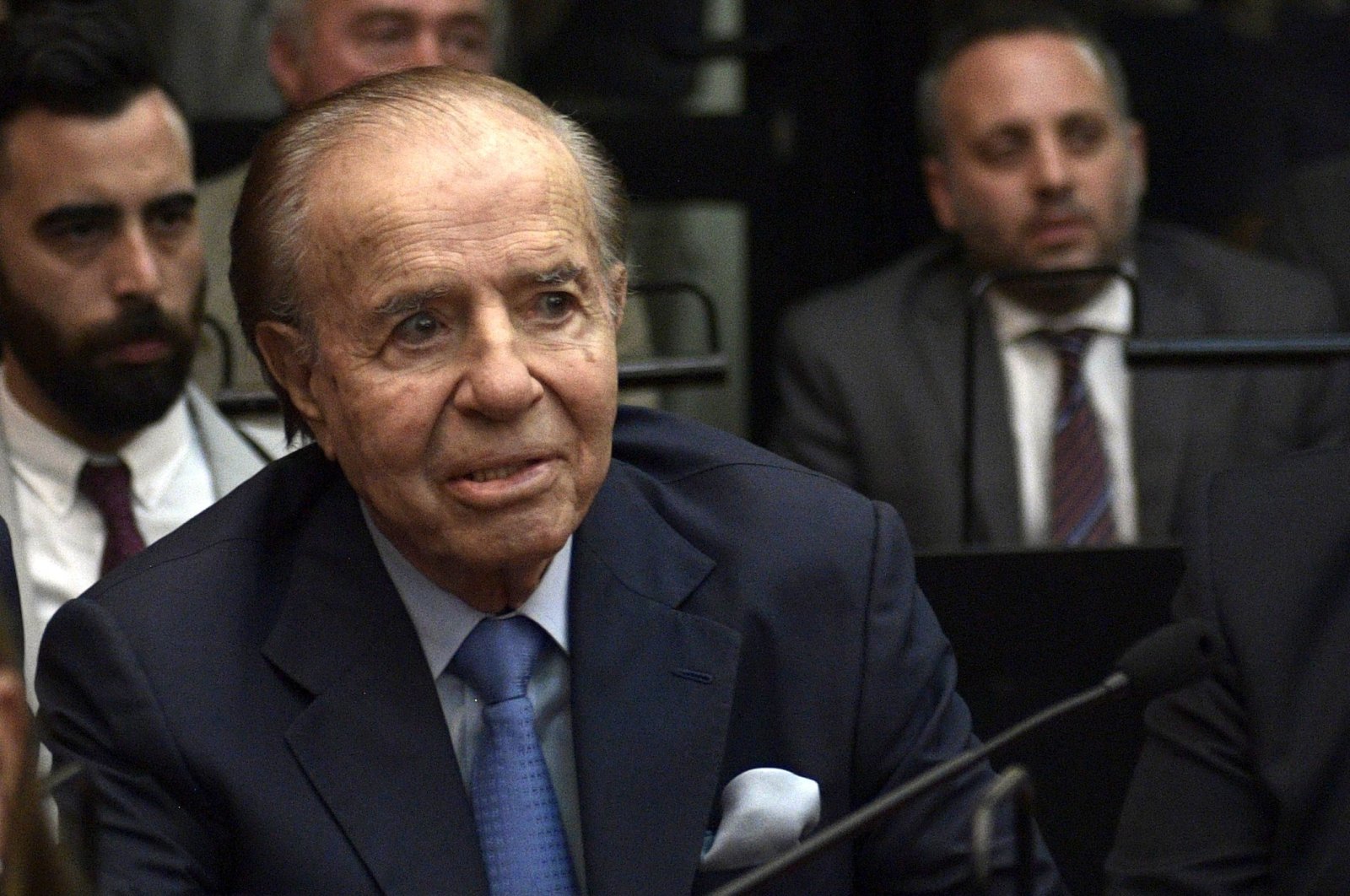 In this file photo Argentine former president and current senator Carlos Menem gestures before hearing his sentence during his trial over accusations of attempting to block the 1994 AMIA bombing investigation, in Buenos Aires taken on Feb. 28, 2019. (AP Photo)
by Agencies Feb 15, 2021 11:44 am
RECOMMENDED

Former Argentine President Carlos Menem, who presided over the country's brief economic stability during the 1990s, has died at the age of 90 due to ailing health.

Menem had been in poor health and was hospitalized several times in recent months for pneumonia. Incumbent President Alberto Fernandez, who declared three days of national mourning for Menem, tweeted his "deep regret" at the news of his passing and extended condolences to Menem's family.

Menem will be buried Monday in the Islamic cemetery in Buenos Aires next to his son, Carlos Menem, Jr, who died in 1995 in a helicopter accident.

The former president's wake began Sunday night at the Congress building, where Vice President and Senate leader Cristina Kirchner received Menem's family and coffin, draped with the Argentine flag. An emotional Fernandez and his wife, Fabiola Yanez, arrived an hour later and offered their condolences to the family. After that, the doors were opened to admit the hundreds of mourners lined up outside.

The dapper lawyer from one of Argentina’s poorest provinces, dismissed by critics as a playboy, steered Argentina toward a free-market model that was, at one point, envied by neighbors and favored by investors. Menem’s accomplishments, however, coincided with growing unemployment, economic inequality and foreign debt.

Menem was also supremely flexible as a politician, beginning his career as a self-styled disciple of Gen. Juan Domingo Peron, who founded the populist movement that bears his name and placed the economy largely under state control. Menem, who served two terms as president between 1989 and 1999, transformed the country – but in the opposite direction.

"I don’t know if I’m going to get the country out of its economic problems, but I’m sure going to make a more fun country," Menem once said. He relished the company of celebrities, hosting the Rolling Stones and Madonna in Buenos Aires, and memorably shrugged off criticism after receiving a red Ferrari as a gift from an Italian businessman in 1990.

"It is mine, mine and mine,” Menem, an auto racing fan, said in front of television cameras. "Why would I donate it?"

Later, he reluctantly agreed to auction off the car for $135,000, with the proceeds going to state coffers.

The son of Syrian immigrants whose family owned a winery, Menem, nicknamed "The Turk," was a folksy, three-time governor of northwestern La Rioja Province, noted for shoulder-length hair and muttonchop sideburns when he came to international prominence.

He won the Peronist Party nomination and surged to victory in the 1989 presidential elections, capitalizing on economic and social chaos in Argentina. The country was mired in 5,000% annual inflation and the poor were sacking supermarkets to obtain food.

Under Menem, the economy registered strong growth, inflation dropped to single digits and the peso, the national currency, enjoyed unprecedented stability as it was pegged to the U.S. dollar. The long hair and sideburns were gone and the flashy clothes replaced by imported, hand-made suits.

The core of Menem’s recovery plan, masterminded by energetic Harvard-educated Economy Minister Domingo Cavallo, was the withdrawal of the state from the economy.

Menem removed controls on prices and interest rates. He sold the state-owned phone company, airlines, race tracks, steel mills and the oil giant YPF, then South America’s largest company. He cut the state payroll and encouraged foreign investment. He curbed once-powerful labor unions that formed the backbone of the Peronist movement and were angered by state payroll cuts that eliminated jobs.

But this approach is widely considered to have led to the economic crisis of 2001, when debt stood at $100 billion, the country defaulted on repayment, the currency's value plunged and unemployment skyrocketed. By the end of Menem's second term, the public deficit stood at $6 billion, unemployment was at 14% and poverty affected a third of the population. But things were to get worse.

In foreign affairs, Menem withdrew Argentina from the Non-Aligned Movement, a Cold War-era structure that had espoused independence from the United States and – less so – the Soviet Union, and forged strong ties with Washington.

Argentine troops participated in the 1991 Gulf War against Iraq and joined U.N. peacekeepers in Haiti and the former Yugoslavia.

During Menem’s tenure, Argentina was the scene of deadly bombings – against the Israeli embassy in Buenos Aires in 1992 and a Jewish center in 1994. Argentina accused Iran of involvement; Iran denied it. Menem was later tried for the alleged cover-up of those responsible for the attack on the Jewish center but was found not guilty in a trial in 2019.

As president, Menem prevailed in disputes with the Argentine military, whose 1976 coup had led to the extrajudicial killings and disappearances of tens of thousands of people. He trimmed armed forces spending and abolished the highly unpopular military conscription system.

He dismayed human rights groups by granting a pardon to former military junta members serving sentences of up to life in prison for crimes connected to the disappearance of Argentine dissidents during the 1976-1983 dictatorship. The pardon was extended to former guerrillas in what Menem described as a process of national reconciliation.

Menem also renewed relations with Britain, severed after the Argentine dictatorship’s 1982 invasion of the British-held Falkland Islands. The invasion ended in Argentina’s defeat in a 74-day war.

Menem was elected governor of La Rioja in 1973, but his first term was cut short by the 1976 coup. The military rulers sent him to prison, along with other politicians. He later was confined for nearly five years in a small village in northern Formosa province.

Various controversies trailed Menem after his presidency. In 2001, he was detained for several months for alleged involvement in the sale of Argentine weapons to Croatia and Ecuador in the 1990s, at a time of international embargoes on those countries. He was eventually convicted in the case and sentenced in 2013 to seven years in prison, but he was protected from going to jail because he had been elected as a senator in 2005 and enjoyed immunity. The case was dropped in 2017.

Menem was also tried for covering up the 1994 attack on the Argentine Mutual Israeli Association (AMIA) in Buenos Aires, which killed 85 people, but again was acquitted.

In 2018, he was sentenced to three years in prison for embezzlement, but his parliamentary immunity protected him from going to prison.

His colorful political career aside, Menem was a subject of fascination for his personal life. He dined with actors, models and pop music stars, danced the tango on television, played soccer and posed for the covers of gossip magazines.

In 1966 he married the Argentine Zulema Yoma and they had two children: Carlos Facundo, who died at the age of 26 when the helicopter he was piloting crashed, and Zulema María Eva. The marriage was dissolved amid a scandal that included the eviction in 1990 of the then-first lady from the presidential residence.

In 2001, at age 70, Menem married the Chilean television presenter and former Miss Universe Cecilia Bolocco, who was 36. The couple had a son, Máximo. The couple divorced in 2011.

Menem also had a son with the teacher and later Peronist deputy Martha Meza, whom he met when he was confined in Formosa during the dictatorship. Carlos Nair Meza was 25 years old when Menem acknowledged him as his son.