Former US Secretary of State Colin Powell dies from COVID-19 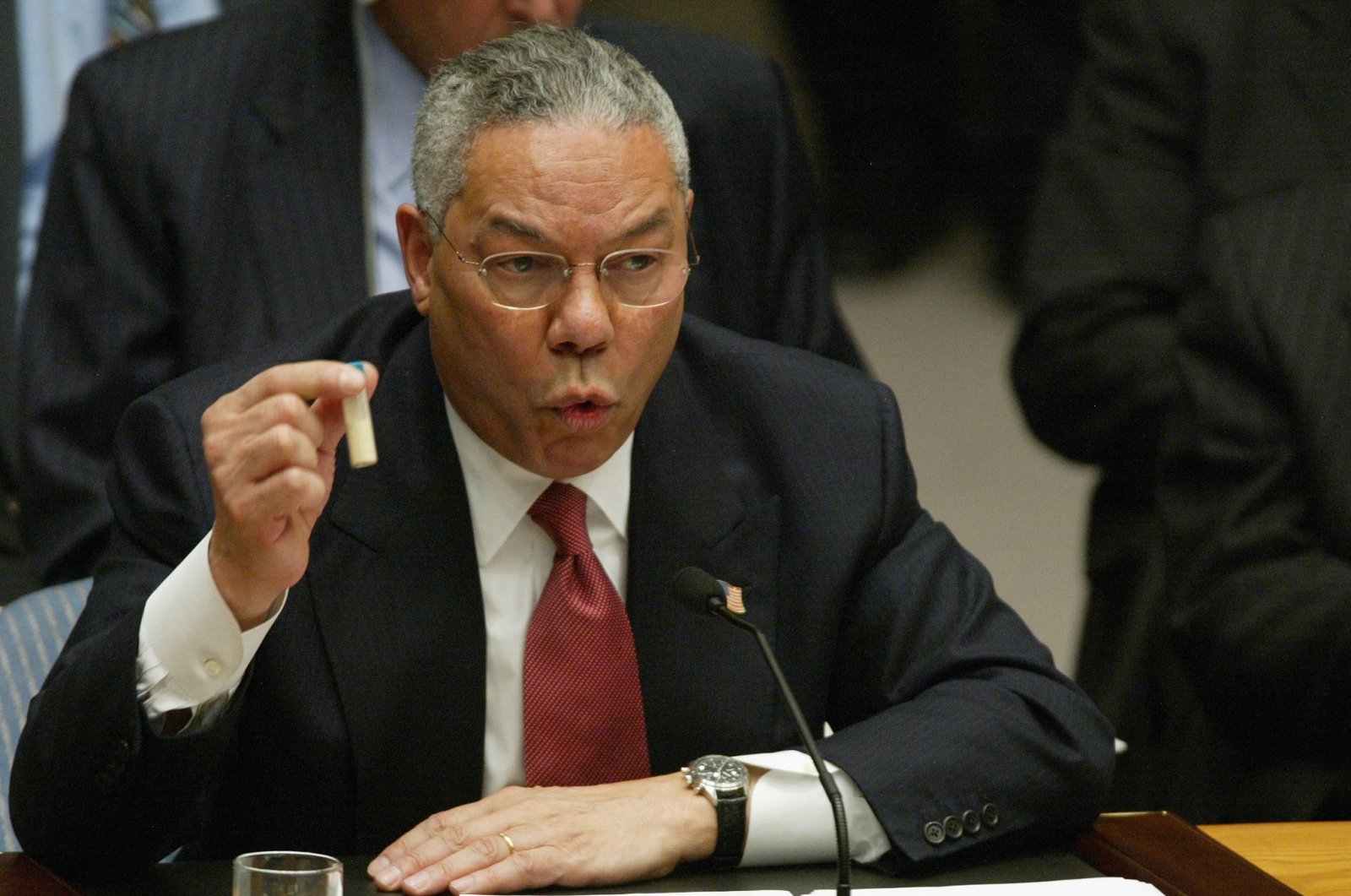 In this file photo taken on Feb. 5, 2003 US Secretary of State Colin Powell holds up a vial that he said was the size that could be used to hold anthrax as he addresses the United Nations Security Council (UNSC) at the U.N. in New York. (AFP Photo)
by French Press Agency - AFP Oct 18, 2021 3:13 pm
RECOMMENDED

Colin Powell, the son of Jamaican immigrants who became a U.S. war hero and the first Black secretary of state – though he later saw his legacy tarnished when he made the case for war in Iraq in 2003 – died on Monday of COVID-19 complications. He was 84.

The retired four-star general and former head of the Joint Chiefs of Staff who served four presidents made his reputation as a man of honor distant from the political fray – an asset in the corridors of power.

"General Powell is an American hero, an American example, and a great American story," George W. Bush said as he announced Powell's nomination as secretary of state in 2000. "In directness of speech, his towering integrity, his deep respect for our democracy, and his soldier's sense of duty and honor, Colin Powell demonstrates ... qualities that will make him a great representative of all the people of this country."

But he found it hard to live down his infamous February 2003 speech to the United Nations Security Council about the alleged existence of weapons of mass destruction in Iraq – the evidence he presented was later proven to be false.

Born April 5, 1937 in Harlem, Powell's "American Journey" – the title of his autobiography – started in New York, where he grew up and earned a degree in geology. He also participated in the Reserve Officers' Training Corps (ROTC) in college, and upon his graduation in June 1958, he received a commission as a second lieutenant in the U.S. Army, and was posted in what was then West Germany.

Powell completed two tours of duty in Vietnam – in 1962-63 as one of John F. Kennedy's thousands of military advisors, and again in 1968-69 to investigate the My Lai massacre. He earned a Purple Heart, but also faced questions about the tone of his report into the hundreds of deaths at My Lai, which to some seemed to dismiss any claims of wrongdoing.

"I was in a unit that was responsible for My Lai. I got there after My Lai happened," he told interviewer Larry King in 2004. "So, in war, these sorts of horrible things happen every now and again, but they are still to be deplored."

Back in Washington, he quickly rose through the ranks to the pinnacle of the national security establishment, serving Ronald Reagan as national security advisor, and both George H.W. Bush and Bill Clinton as chairperson of the Joint Chiefs from 1989-93. Powell's experiences in Vietnam as a young soldier led him to develop the so-called "Powell Doctrine," which said that if the United States must intervene in a foreign conflict, it should deploy overwhelming force based on clear political objectives.

For many Americans, he was the public face of the 1991 Gulf War against Iraq. Powell was initially lukewarm about going into the country, but his reputation soared in the aftermath of the blitzkrieg that ejected Saddam Hussein's forces from Kuwait.

For a while, he even considered a run for the presidency. But after retiring from the army in 1993, Powell devoted himself to working on behalf of disadvantaged young people as chairperson of America's Promise, a youth advocacy group. For a while, he fended off new questions on his desire for public office, until Bush came calling for the popular military man to lead the State Department as the 65th secretary of state.

"I hope it will give inspiration to young African Americans," Powell said in his nomination acceptance speech in 2000, telling them: "There are no limitations upon you." His four years at Foggy Bottom (2001-04) were forever marked by the decision to invade Iraq in 2003.

Beforehand, Powell sought a more prudent policy, struggling for traction against hawks in the Bush cabinet while trying to sway allies for their support – all to no avail. He defended his support for the invasion until the very end of his tenure, and has endured the criticism ever since. "I knew I didn't have any choice," Powell told The New York Times in July 2020. "What choice did I have? He's the president."

Powell freely admitted his liberal social views made him a strange bedfellow for many Republicans, though the party was often happy to hold him up as an example of its inclusivity.

"I'm still a Republican. And I think the Republican Party needs me more than the Democratic Party needs me," he told MSNBC in 2014. "You can be a Republican and still feel strongly about issues such as immigration and improving our education system and doing something about some of the social problems that exist in our society and our country."

But since 2008, he has endorsed Democrats for the presidency, twice backing Barack Obama, and then Hillary Clinton and Joe Biden. Powell earned a number of civilian honors, including the Presidential Medal of Freedom – twice from Bush Senior and Clinton. He married his wife Alma in 1962. They had three children: Michael, Linda and Annemarie.