Homes, land across 10 western US states threatened by wildfires 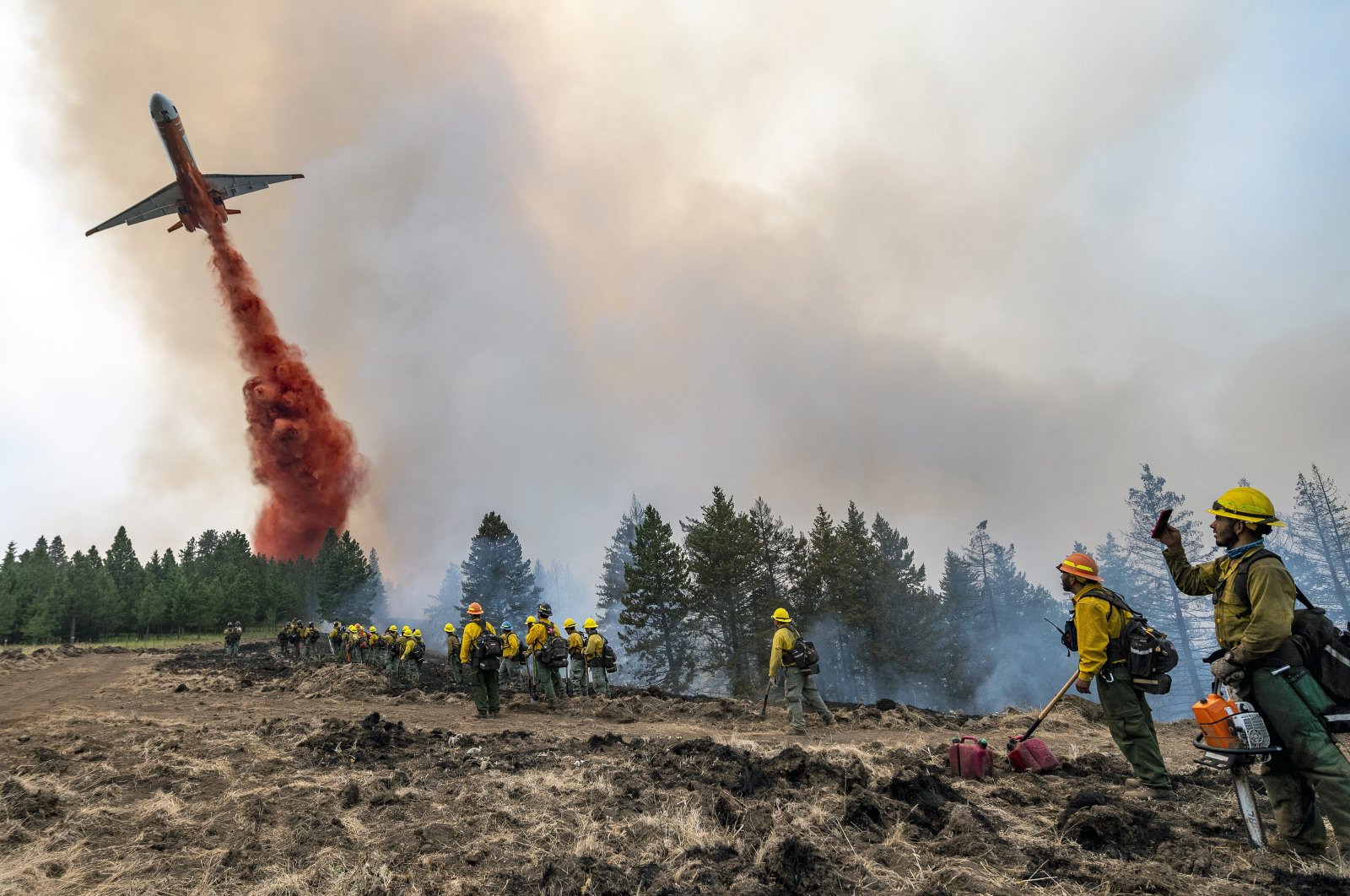 Wildland firefighters watch and take video with their cellphones as a plane drops fire retardant on Harlow Ridge above the Lick Creek Fire, southwest of Asotin, Washington, U.S., July 12, 2021. (Lewiston Tribune via AP)
by ASSOCIATED PRESS Jul 13, 2021 8:57 am
RECOMMENDED

Nearly 60 wildfires tore through bone-dry timber and brush from Alaska to Wyoming, according to the National Interagency Fire Center. Arizona, Idaho and Montana accounted for more than half of the large active fires.

The fires erupted as the West was in the grip of the second bout of dangerously high temperatures in just a few weeks. A climate change-fueled megadrought also is contributing to conditions that make fires even more dangerous, scientists say.

The National Weather Service says the heat wave appeared to have peaked in many areas, and excessive-heat warnings were largely expected to expire by Tuesday. However, they continued into Tuesday night in some California deserts, and many areas were still expected to see high in the 80s and 90s.

In Northern California, a combined pair of lightning-ignited blazes dubbed the Beckwourth Complex was less than 25% surrounded after days of battling flames fueled by winds, hot weather and low humidity that sapped the moisture from vegetation. Evacuation orders were in place for more than 3,000 residents of remote northern areas and neighboring Nevada.

There were reports of burned homes, but damage was still being tallied. The blaze had consumed 140 square miles (362 square kilometers) of land, including in Plumas National Forest.

A fire that began Sunday in the Sierra Nevada south of Yosemite National Park exploded over 14 square miles (36 square kilometers) and was just 10% contained. A highway that leads to Yosemite’s southern entrance remained open.

The largest fire in the United States lay across the California border in southwestern Oregon. The Bootleg Fire – which doubled and doubled again over the weekend – threatened some 2,000 homes, state fire officials said. It had burned at least seven homes and more than 40 other buildings.

Over the weekend, the Klamath County Sheriff’s Office warned that it would cite or even arrest people who ignored orders to “go now" in certain areas immediately threatened by the blaze.

Tim McCarley told KPTV-TV that he and his family were ordered to flee their home on Friday with flames just minutes behind them.

“They told us to get the hell out cause if not, you’re dead,” he said.

He described the blaze as “like a firenado," with flames leaping dozens of feet into the air and jumping around, catching trees “and then just explosions, boom, boom, boom, boom."

The fire was burning in the Fremont-Winema National Forest, near the Klamath County town of Sprague River. It had ravaged an area of about 240 square miles (621 square kilometers), or nearly twice the size of Portland.

Firefighters hadn't managed to surround any of it as they struggled to build containment lines.

The fire drastically disrupted service on three transmission lines providing up to 5,500 megawatts (MW) of electricity to California, and that state's California's power grid operator has repeatedly asked for voluntary power conservation during evening hours.

Elsewhere, a forest fire started during lightning storms in southeast Washington grew to 86 square miles. It was 20% contained Monday.

Another fire west of Winthrop closed the scenic North Cascades Highway, the most northern route through the Cascade Range. The road provides access to North Cascades National Park and the Ross Lake National Recreation Area.

In Idaho, Gov. Brad Little mobilized the National Guard to help fight twin lightning-sparked fires that have together charred nearly 24 square miles of dry timber in the remote, drought-stricken region.

The July heat wave follows an unusual June siege of broiling temperatures in the West, and comes amid worsening drought conditions throughout the region.