Hopes dimming as 159 still unaccounted for in Miami condo search 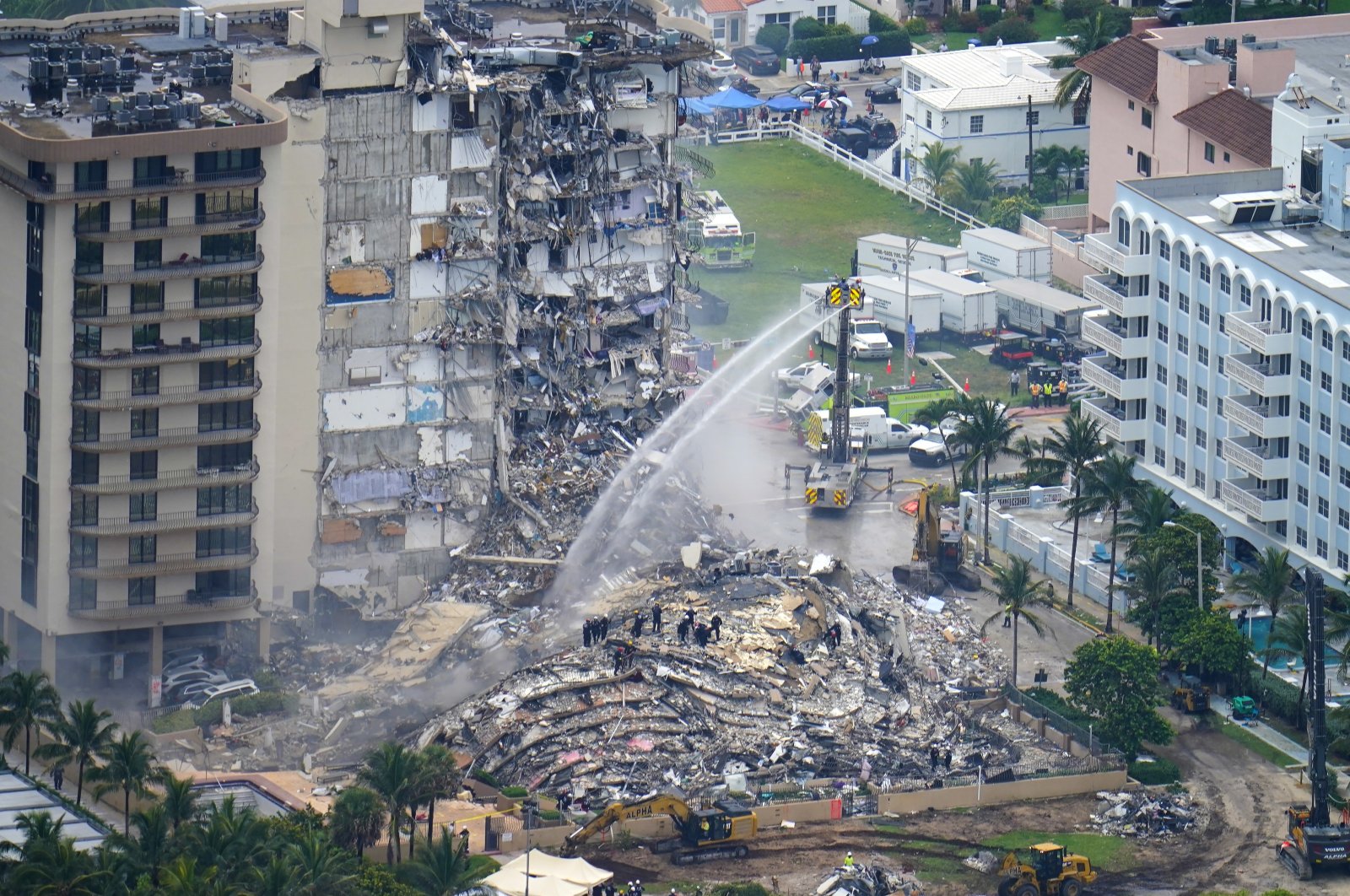 Nearly 160 people are still unaccounted for after an oceanfront condominium building collapsed near Miami, and relatives of the missing can do little but pray and hope their loved ones will somehow be found alive as search and rescue teams work around the clock.

As scores of rescuers used big machines, small buckets, drones, microphones and their own hands on Friday to pick through the mountain of debris that had been the 12-story Champlain Towers South, Rachel Spiegel was anxious for any update on her missing mother, 66-year-old Judy Spiegel, who lived on the sixth floor.

“I’m just praying for a miracle,” Spiegel said. “We’re heartbroken that she was even in the building.”

Jeanne Ugarte was coming to grips with what she feared was a tragic end for longtime friends Juan and Ana Mora and their son Juan Jr., who was visiting his parents in their condo at the tower.

Hopes rested on how quickly crews could complete their grim, yet delicate task in Surfside, just a few miles north of Miami's South Beach.

“Any time that we hear a sound, we concentrate in that area,” Miami-Dade Assistant Fire Chief Raide Jadallah said. “It could be just steel twisting, it could be debris raining down, but not specifically sounds of tapping or sounds of a human voice.”

Buffeted by gusty winds and pelted by intermittent rain, two heavy cranes removed debris from the pile using large claws Friday, creating a din of crashing glass and metal as they picked up material and dumped it to the side. A smoky haze rose from the site.

Once the machines paused, firefighters wearing protective masks and carrying red buckets climbed atop the pile to remove smaller pieces by hand in hope of finding spots where people might be trapped. In a parking garage, rescuers in knee-deep water used power tools to cut into the building from below.

Surfside Mayor Charles Burkett said crews were doing everything possible to save as many people as they could.

“We do not have a resource problem, we have a luck problem,” he said.

Officials said they still don’t know exactly how many residents or visitors were in the building when it fell, but they were trying to locate 159 people who were considered unaccounted for and may or may not have been there.

Flowers left in tribute decorated a fence near the tower, and people awaiting news about the search watched from a distance, hands clasped and hugging. Congregants prayed at a nearby synagogue where some members were among the missing.

On the beach near the collapsed structure, visitor Faydah Bushnaq of Sterling, Virginia, knelt and scratched “Pray for their souls” in the sand.

“We were supposed to be on vacation, but I have no motivation to have fun,” Bushnaq said. “It is the perfect time to say a prayer for them.”

Miami-Dade Police Director Freddy Ramirez said authorities were working with the medical examiner’s office to identify the bodies that have been found. Eleven injuries were reported, with four people treated at hospitals.

“Debris is falling on them as they do their work,” she said. “We have structural engineers on-site to ensure that they will not be injured, but they are proceeding because they are so motivated.”

Teenager Jonah Handler was rescued from the rubble hours after the collapse, but his mother, Stacie Fang, died. Relatives issued a statement expressing thanks “for the outpouring of sympathy, compassion and support we have received.”

“There are no words to describe the tragic loss of our beloved Stacie,” it said.

While officials said no cause for the collapse early Thursday has been determined, Gov. Ron DeSantis said a “definitive answer” was needed in a timely manner. Video showed the center of the building appearing to tumble down first, followed by a section nearer to the beach.

The missing included people from around the world.

Israeli media said the country’s consul general in Miami believed that 20 of its citizens were missing. Another 22 people were unaccounted for from Argentina, Venezuela, Uruguay and Paraguay, including relatives of Paraguayan first lady Silvana de Abdo Benítez.