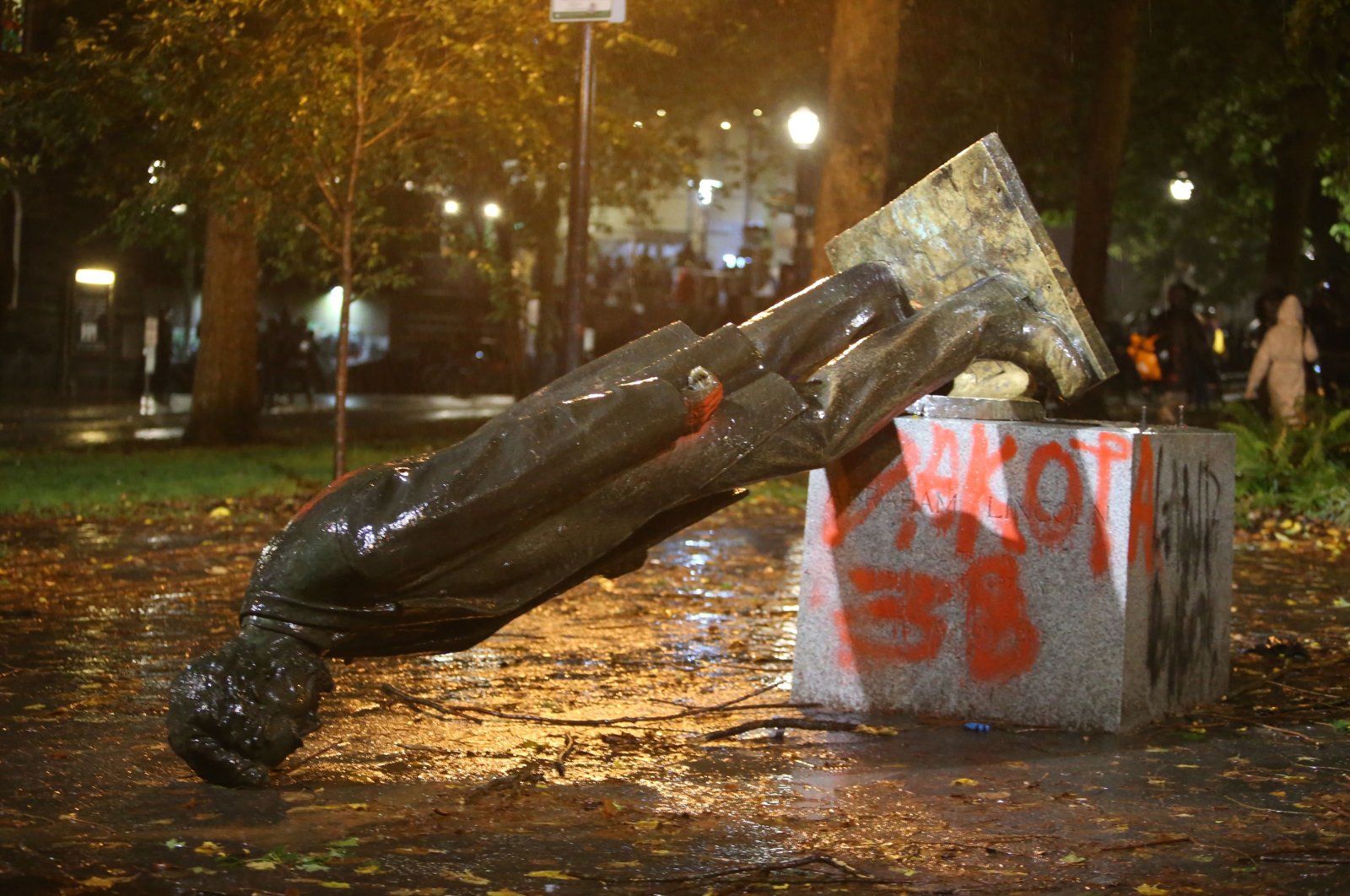 Protesters in Portland overturned statues of former Presidents Theodore Roosevelt and Abraham Lincoln and vandalized the Oregon Historical Society in a declaration of “rage” toward Columbus Day.

The group Sunday night threw chains around Roosevelt's statue, officially titled “Theodore Roosevelt, Rough Rider." They splashed red paint on the monument and used a blowtorch on the statue's base, news outlets reported. The statue was pulled down by the crowd just before 9 p.m. The group later turned their attention toward Lincoln’s statue, pulling it down about eight minutes later.

Historians have said Roosevelt expressed hostility toward Native Americans, once saying: “I don’t go so far as to think that the only good Indians are dead Indians, but I believe nine out of every 10 are ...” Protesters spray-painted “Dakota 38” on the base of Lincoln's statue, referencing the 38 Dakota men Lincoln approved to have hanged after the men were involved in a violent conflict with white settlers in Minnesota.

In a tweet, Trump said the demonstrators were "taking advantage of fools" and urged the city to "call in the Feds!"

Portland Mayor Ted Wheeler denounced the violence as "obscene," saying it had turned attention away from the symbolism of Columbus Day, which for Native people in the U.S. is a painful reminder of oppression.

In New Mexico, protesters on Monday tore down a historical monument as part of demonstrations in the state and in neighboring Arizona meant to mark Indigenous Peoples Day. Protesters used a rope and chain to topple an obelisk in Santa Fe long a point of contention for its references to the “heroes” who died in battle with “savage Indians.”

Similar protests nationwide in recent months prompted by the death of George Floyd, an unarmed black man who died in police custody in Minneapolis, have led to statues of Confederate leaders, slave traders and other U.S. presidents linked to America's history with slavery being felled. Statues of two other former presidents have previously been felled by protesters in Portland. One was of Thomas Jefferson, who enslaved more than 600 people over the course of his life, and another was of George Washington, who also owned slaves.

The global anti-racism movement sparked by the death of Floyd has forced many people in Europe and the U.S. to confront uncomfortable truths about their pasts. A number of monuments with links to colonialism and slavery continue to be the target of anti-racism protesters with two colonial-era statues in France daubed with red paint in June. Similar efforts unfolded in Britain, as protesters drew up a "hit list" of 60 statues of slave traders across the country to be removed. London's mayor promised a review of all monuments.

As protests calling for justice and a reckoning with racial inequality have dominated the U.S., anger has also started to focus on statues of southern Civil War heroes, the Confederate flag and statues of Italian explorer Christopher Columbus, who opened the Americas to European settlement.